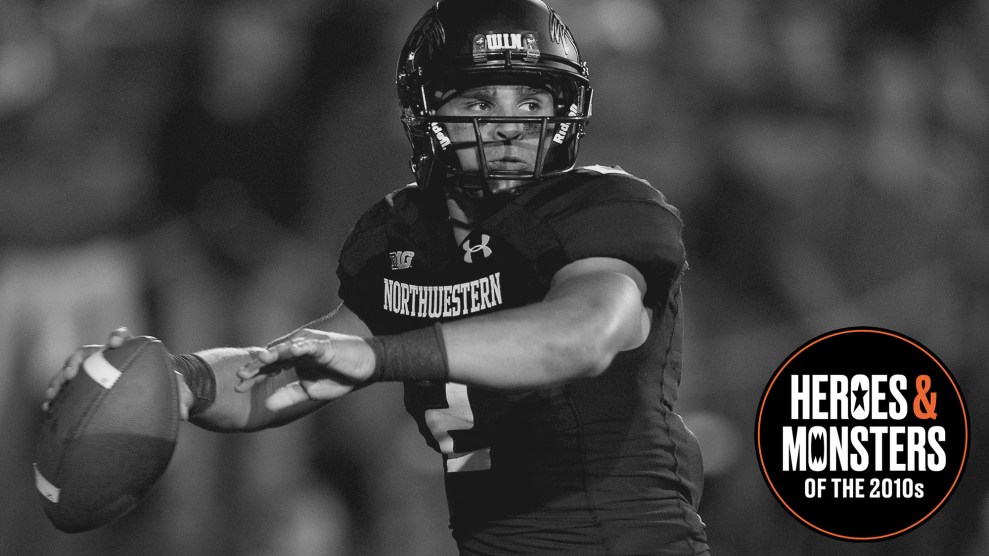 By June 2013, when I wrapped up my time at Northwestern, I knew Kain Colter as the school’s star quarterback, wide receiver, and team captain. He’d led the Wildcats to a Gator Bowl victory, the school’s first bowl win in 64 years, as we heard over and over again. Once, he’d aspired to be an orthopedic surgeon, but soon after arriving on campus he was steered toward less demanding pursuits. That summer, he would intern at Goldman Sachs. He was a familiar type at Northwestern—an overachiever who would enjoy a fallback career of managing other people’s wealth, should the dream careers not pan out.

Seven years later, Colter looks like something very different: a revolutionary. In 2014, he led a union drive at Northwestern premised on the straightforward notion that college football players are university employees. Nobody had done such a thing in the history of college sports—not even as the NCAA evolved into a cartel system funded through the expropriation of “amateur” athletes’ market value, not even as the NCAA cracked down on athletes trying to reclaim some of that value in the underground market created by the amateurism-but-only-sorta regime. This was brave work, pitting Colter and his teammates not just against a hostile status quo but against his own coach and university. For this Colter was seen as a radical, and in the radically corrupt context of college sports, that’s what he was. The union effort very nearly worked.

The National Labor Relations Board’s regional director in Chicago initially gave Northwestern’s players the right to form a union based on, among other things, the dozens of hours they put in each week just to play football. (Colter pointed to the academic sacrifices he had to make because of the sport’s year-round time demands.) The university appealed the ruling to the full NLRB board, and college sports’ mafiosos, from NCAA President Mark Emmert to Big Ten Commissioner Jim Delany, questioned the decision. Colter became a pariah to former Northwestern players and alumni alike, and his head coach, Pat Fitzgerald, called on the team to vote against unionizing. In the end, the NLRB punted, and the players’ votes would never be counted.

Still, it’s hard not to look back on Colter’s work with Ramogi Huma—the former UCLA linebacker with whom he formed the College Athletes Players Association—and marvel at what they very nearly accomplished. Most of the action in the athletes’ rights movement has been in the courts. Important victories have been won there, foremost of which was a federal judge’s 2014 ruling, in the case of former UCLA basketball player Ed O’Bannon, that the NCAA violated antitrust law by preventing players from profiting off their names. But the fight also has to be waged along other fronts, and by the athletes themselves, the people whose bodies—many of them Black and Brown—get exploited by the NCAA and its member institutions for profit. The union drive was an expression of jock agency. In its simplicity it clarified the simple claim at the root of the argument against the NCAA. We are workers, Colter and his teammates said, and we’d like to be recognized as such. The former Goldman intern is now an organizer for the Working Families Party in Colorado.