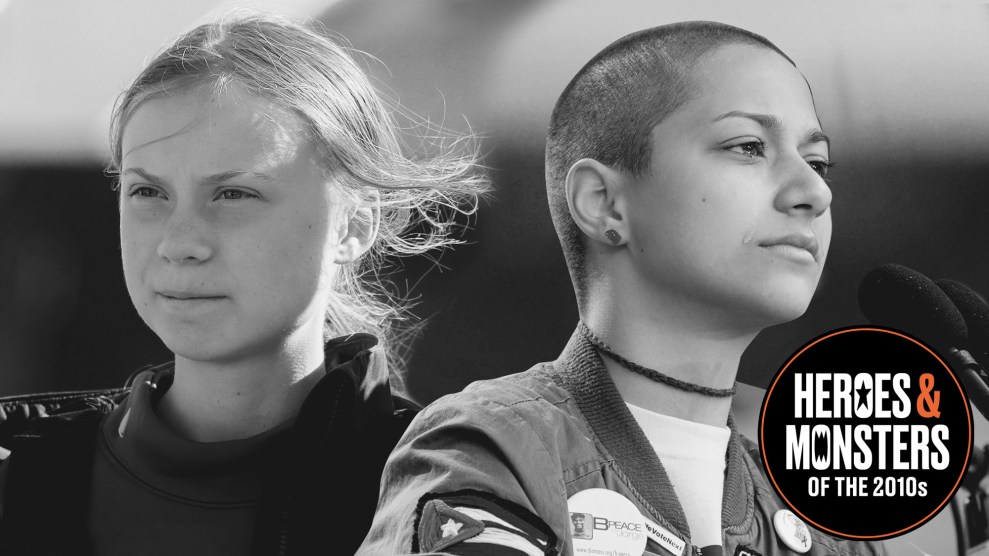 Furious, funny, and fed up. True heroes of the decade: the students who spoke up, walked out, and shook us from paralysis and moral complacency.

I’m talking, of course, about the recent youth movements—March For Our Lives and the global climate strike school walkouts. Each was a unique response to a monumental crisis, but they are linked by organizational prowess and by an unfiltered “We Call BS” ethos, the latter best embodied by student leader Emma González, who secured her place as an icon of this long American decade.

Enough is enough, they said, and their howls for action on guns and climate policy now define a new generation of activist: They ok-boomered the old guard with digital-native nuance that deflected even the most savage attack, making critics look precious and obsessed. When Fox News star and pious white supremacist Laura Ingraham smeared Parkland massacre survivor David Hogg for being rejected by some universities (he’d already been ultra-vilified by the right as a Nazi crisis actor), he arranged an advertiser boycott. TripAdvisor, Hulu, Johnson & Johnson, and Nestlé, among others, fled. Ingraham apologized. We love a David Hogg vs. Goliath yarn.

“Whenever somebody called you a ‘dick’, or whatever, just say, ‘I love you’,” Hogg told journalist Carlos Maza at Vox for this video on how Hogg beats back bullies. “We don’t need anybody else being super mean to each other, like Laura was to me, or anybody else. Point out the few that are just absolutely ridiculous. And after that, people will start fighting for you.”

And fight they did. In March last year, I went to DC as young Americans jammed the capital (and every other city) in a display of angry optimism, executed with the precision production values of a Beyoncé tour. “It’s all about making civic engagement cool,” 17-year-old March For Our Lives co-founder Jaclyn Corin told me during a roundtable discussion hosted by Mother Jones around the same time. “They see people that are the same age as them getting up there and actually doing amazing things around the country and say, ‘Oh, these kids are my age and are getting out there and doing all this amazing work, so why can’t I?’”

We caught up with David Hogg in the midst of the “Road to Change” bus tour, six months after the shooting. The movement had found an immediate target: registering and turning out voters for the 2018 midterms. “We’ve spoken in more congressional districts than almost any presidential campaign has in the same time span,” Hogg said—25 states in 60 days. “We know what America’s thinking right now.”

“I promise you this is all strategic,” the group’s chief strategist Matt Deitsch told me.

It might have worked: A Tufts University study found 31 percent of 18- to 29-year-olds voted, up 10 points from 2014—the highest turnout among this group in a generation. Other studies show gun reform was a top priority.

Meanwhile, a similar existential dread was driving a Swedish teenager, Greta Thunberg, to skip class again and again in a solo protest that eventually gathered the unprecedented solidarity of students worldwide. This message was also simple: You, our lazy leaders, are condemning us to live on a burning, dying planet. Stop killing us.

Here in the US, this clash of old and new was distilled most effectively into the Sunrise Movement, “a much younger, more diverse, more in-your-face set of activists with their own set of leaders,” as my colleague Rebecca Leber wrote in her December profile of the group. “In 2020, they aim to sweep a Democrat into the White House who will tackle global warming, spurred on by what Sunrise hopes will be the largest youth strikes in US history in 2021.” That would be a remarkable achievement, given that just a year after Thunberg began striking, millions poured into streets and parks across an estimated 185 countries—already setting a new record for the largest climate protest in history.

“The romanticism is what needed to happen because people are finally listening.”

When I asked Corin, one of the #NeverAgain founders, if she worried older people were overly romanticizing her youth, and if that pressure would eventually get to be too much, she said no. She said it could be useful. “People like to romanticize the fact there are young people, and I truly don’t get it,” she said. “Most of the things we say are facts, or stories, and those don’t have age limits. And so, I guess the romanticism is what needed to happen because people are finally listening.”

If media attention is any measure, that is resoundingly true. More recently, Greta Thunberg was named Time’s person of the year. Those optics are satisfying given that our president is a guy who craves the Time cover so much he Photoshopped himself onto one and hung it in his golf course, and who runs an internationally derided, recalcitrant climate policy, raving at rallies about the perils of wind power, dishwasher regulations, and the Paris accord. Masha Gessen at The New Yorker aptly calls Thunberg the “anti Trump.”

The March For Our Lives heroes also found their way to Time’s cover in March 2018, under an all-caps headline that captured the virtuous power of all of these heroes: “Enough.” The punctuation—not an exclamation point, but a period—is important. Enough, full stop. These movements aren’t simply exhortations to act! They are lines drawn in the sand: Everything from here on out, everything we do, every choice we make, our eyes are wide-open, our lives are on the line, and we’re running out of time. Stop killing us.