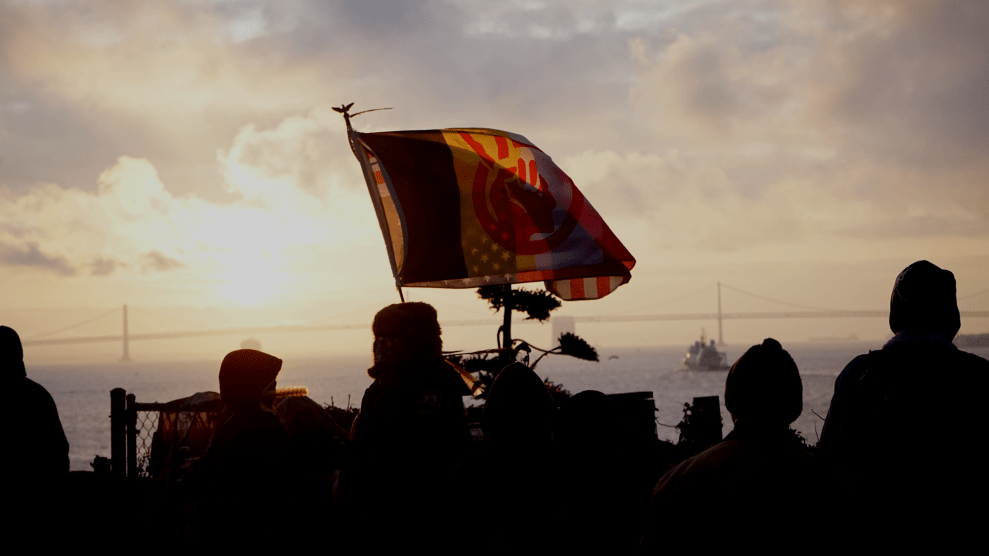 The American Indian Movement flag flies with an upside down American flag at sunrise on Alcatraz Island on Nov. 28, 2019. Delilah Friedler

For most Americans, Thanksgiving is a holiday. We come together with family and friends to express gratitude by feasting, drinking, and arguing. We re-tell an old story: that in 1621, European settlers gathered with members of the Wampanoag tribe to celebrate a successful harvest—which is true, but it is not the whole truth, implying rosy relations between “the Pilgrims and Indians.” Just 15 years later, colonial soldiers massacred 400 Pequot men, women, and children in retaliation for a settler’s death. The next day, the governor of the Massachusetts Bay Colony proclaimed “a day of thanksgiving and celebration for subduing the Pequots.”

For hundreds of years, non-Natives have continued to celebrate Thanksgiving, while for many Indigenous people, it remains a day of mourning.

“In this political climate, coming here is my way of honoring those who have sacrificed so much so we can have our rights recognized locally and globally.”

Native Americans in northern California gather annually for a sunrise ceremony, called “Unthanksgiving Day,” on Alcatraz Island in the San Francisco Bay. This year’s gathering, though, was special: It marked 50 years since Bay Area Natives, having left reservations and flocked to cities, staked a claim to Alcatraz (where the infamous federal prison was decommissioned in 1963). On November 20, 1969, Indigenous activists began their 19-month occupation of the island—a watershed moment for Native organizing that pushed President Richard Nixon to end the brutal “termination” era, during which over 100 tribes lost federal assistance. The occupation sparked a chain reaction of radical organizing that continues to this day.

While remembering that occupation, Unthanksgiving Day also honors a much more expansive legacy of Indigenous resistance, one spanning more than 500 years. Before the sun rose this morning in San Francisco, members of many different tribes, clad in traditional regalia, performed dances to honor their ancestors. Elders came forward to acknowledge, thank, and make offerings to the Ohlone people who are indigenous to the region, while Native Hawaiian and Oglala Lakota women offered prayers for the earth in a time of climate chaos. Many spoke about ongoing Indigenous struggles, such as the police repression of Native efforts to protect lands like the sacred Hawaiian mountain Mauna Kea, and the crisis of missing and murdered Indigenous women.

While dire, these issues were discussed against a general background of camaraderie, as long-distance friends and allies re-united.

Daisee Francour, 26, of the Oneida Nation, said it was the biggest turnout she’s seen in three years of attending the ceremony. “In this political climate, coming here is my way of honoring those who have sacrificed so much so we can have our rights recognized locally and globally,” she said.

“It’s really fantastic to see a lot of our old friends from throughout the years,” LaNada War Jack of the Bannock Nation, 73, said. “Everybody is still here, still trying to do whatever they can, and bring their younger generations as well.” War Jack, who has been referred to as “the real leader of the occupation” by one Alcatraz vet, was part of the initial landing party that stormed the island in 1969, evading US Coast Guard boats and aircraft that were trying to stop them. Later, when she wasn’t negotiating with Nixon’s proxies, War Jack hitchhiked to and from the island with her young son via sailboat to attend classes at UC Berkeley.

“Thanksgiving is a time to honor truth in history. I want to be mad at the holiday, however it’s still rooted and founded in Indigenous practice of celebrating the harvest in the fall.”

This morning, ferries began departing from San Francisco at 3 am. One of the first things you see as you approach the island, which is now administered by the National Park Service, is the pro-Indigenous graffiti—”Indians Welcome” and “Indian Land”—that has been preserved since the occupation. Stepping off the boat, the crowd was met with the smell of sage and palo santo wafting across the island’s hills. By 5 am, several thousand people had converged in a circle around a bonfire, brandishing tribal flags and hats with slogans like “Make America Indigenous Again.”

“The Trump administration is making us look like strangers in our own home,” said Jesus Perez-Moya, 72, who has returned to Alcatraz almost every year since he delivered supplies to the occupation as a student in 1969. “The people they’re calling ‘illegal immigrants’ are Mayans, Oaxaqueños, Yaquis, and other tribes from central America. We are here to bring a new consciousness, so we can stop the massacres of Indigenous people in the Amazon and throughout the Americas.”

War Jack noted, “The fight to keep our water clean and protect Mother Earth is very difficult, because we don’t have a very big voice. But it shouldn’t just be on Native people. All people need to be supporting, because without water, there’s no life.”

A Wiphala flag, commonly used to represent Indigenous people in Bolivia, flew above the crowd made up of mostly Natives, and also included a notable ally to their movement: former San Francisco 49ers quarterback Colin Kaepernick. In 2017, Kaepernick was honored by American Indian Movement elder Fred Short for his commitment to racial justice.

After about four hours, a group of Aztec Mexika dancers performed a closing ceremony, and the crowd boarded ferries to return to the San Francisco pier.

Kanyon Sayers-Roods, 31, has attended Unthanksgiving Day and another sunrise ceremony on the island on Indigenous People’s Day each October all her life. As a Mutsun Ohlone, she is indigenous to what’s now called the Bay Area and is frequently asked to bless events in the region because she was raised with knowledge of local Indigenous traditions. “Thanksgiving is a time to honor truth in history,” Sayers-Roods told Mother Jones earlier this week. “I want to be mad at the holiday, however it’s still rooted and founded in Indigenous practice of celebrating the harvest in the fall.”

But this year, Sayers-Roods skipped the Alcatraz ceremony to spend time with relatives in Indian Canyon, a rare slice of the California coast governed by Indigenous people—a reality for which she thanks her mother Ann-Marie Sayers, who persevered in an eight-year legal battle.

“This is a colonialist and capitalist holiday,” said Sayers-Roods, “but it can still be a time to share space with family and the land.”