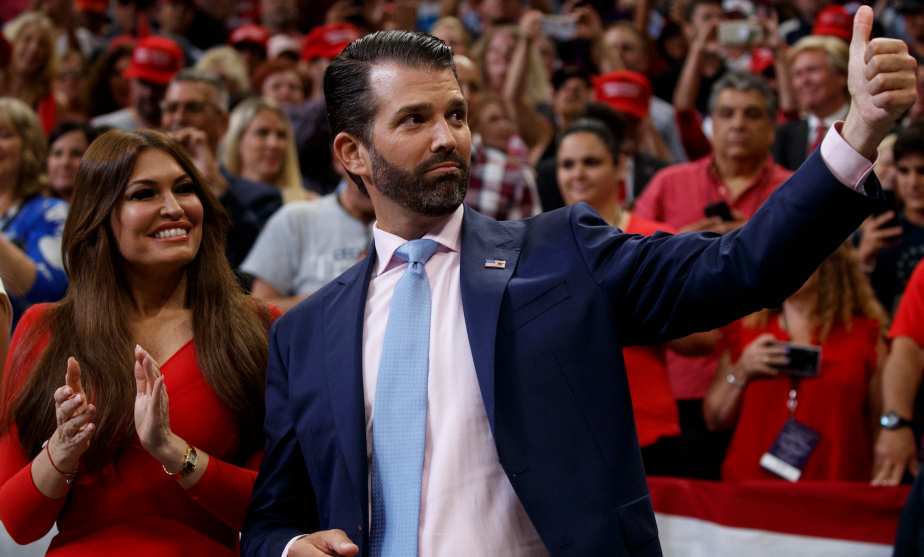 Donald Trump Jr. apparently failed to grasp the hypocrisy in refusing to answer questions for an event to promote his new book, Triggered: How the Left Thrives on Hate and Wants to Silence Us, which is dedicated to mocking liberals and their so-called political correctness.

But the president’s eldest son’s missteps were not lost on the audience at UCLA on Sunday, where his own supporters, frustrated with the lack of a Q&A opportunity, filled the event with incessant booing. At one point, Trump Jr.’s girlfriend, the former Fox News personality Kimberly Guilfoyle, scolded the audience before making fun of their sex lives, an apparent dig at incels. “I bet you engage and go on online dating because you’re impressing no one here to get a date in person.”

The couple abruptly left the event after 20 minutes of booing. But the chaos they left behind did more than expose Trump Jr.’s hypocrisy; it laid bare the increasing tensions on the right, particularly between white supremacists and the conservatives eager to distance themselves from them. The Guardian reports that much of the anger in the room on Sunday came from supporters of Nick Fuentes, a 21-year-old white nationalist quickly gaining prominence with the alt-right crowd, who specifically targeted Charlie Kirk, the founder of the conservative youth group Turning Point USA. From the Guardian:

On Sunday, Kirk appeared alongside Trump Jr. and Guilfoyle but said nothing.

Two Fuentes supporters, delighted with the outcome of Trump Jr’s appearance, later told the Guardian the pro-Trump movement was being infected with “fake conservatism” and that the president himself was at the mercy of a cabal of deep state operatives who wouldn’t let him do many of the things he campaigned on.

A similar crisis erupted at a conservative Q&A last month. “White nationalism and anti-gay hatred have no place in our movement,” Benny Johnson of Turning Point tweeted after the event was similarly drowned out by white nationalists. “This is what the Left wants. It’s time to Wake Up.”

But Johnson and similarly defensive conservatives have little to say about their own roles in encouraging hatred, white nationalism, and anti-Semitism for a new generation. The chaos on Sunday is the kind of thing you should expect when young conservatives are trained to be at the front lines of the culture wars, armed with “fake news” chants and hashtag-ready taunts. As my colleague Stephanie Mencimer reported from Turning Point’s student action summit last year:

Spreading like wildfire on college and high school campuses, Turning Point engages in meme battles with lefties, deploying a #BigGovernmentSucks hashtag. It maintains a “watchlist” of allegedly socialist professors while nursing an intense persecution complex that’s on full display in Palm Beach this week.

As conservatives continue to try to distance themselves from the right’s ugliest faction, don’t expect the Trump Jr.’s of the world to acknowledge their own direct role in creating it.