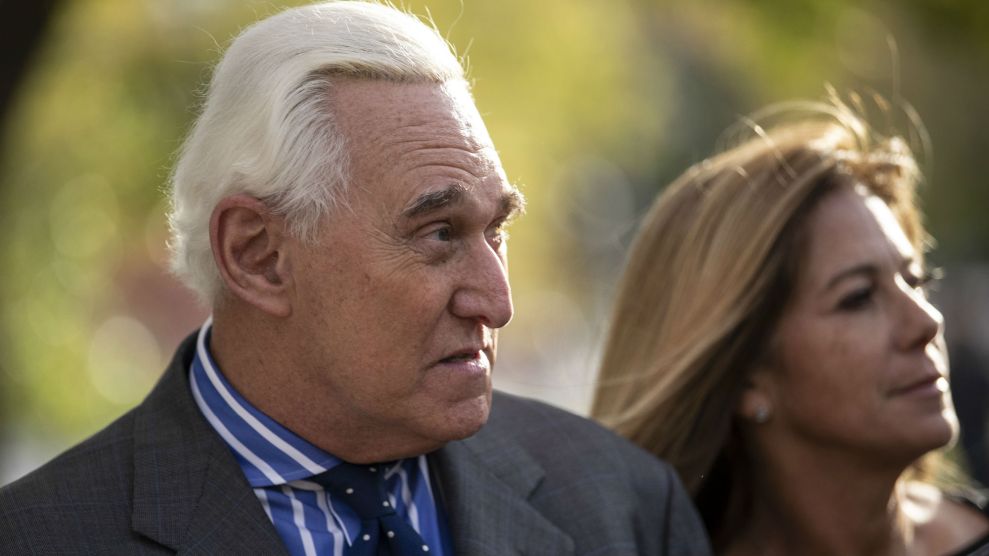 Roger Stone’s conviction Friday on charges of lying to Congress, obstruction of justice, and witness tampering has drawn widespread speculation about whether President Donald Trump will pardon his longtime adviser. Trump, after all, publicly cheered Stone’s promise not to testify against the president in special counsel Robert Mueller’s Russia investigation. And Stone himself, just before his conviction, reportedly sought presidential intervention through a note read on the air by far-right commentator Alex Jones. “I appeal to the president to pardon me because to do so would be an action that would show these corrupt courts that they’re not going to get away with persecuting people for their free speech or for the crime of getting the president elected,” Stone said, according to Jones.

“It’s very real and very possible. Don’t fuck it up.”

This appeal is significant because Stone is asking the president to intervene in a case in which Trump is personally implicated. Stone was found guilty of lying to House investigators about contacts with Trump campaign officials in which he provided updates on WikiLeaks’ plans for releasing emails stolen from Democrats by Russian hackers. Stone’s trial included testimony suggesting that the self-described dirty trickster had personally briefed Trump on WikiLeaks’ plans. This means that Trump likely lied to Mueller when he claimed he did not recall discussing WikiLeaks with Stone.

Strikingly, this is apparently not the first time Stone has tried to convince Trump to use his pardon powers to intercede in the criminal probes surrounding WikiLeaks. After Trump was elected president in 2016, Stone told associates he was working to convince the president to pardon WikiLeaks founder Julian Assange, who at the time faced potential prosecution by the Justice Department in connection with his organization’s publication of classified US government documents in 2010. Randy Credico—a comedian and political activist formerly friendly with Stone—testified at Stone’s trial that in 2016, Stone contacted Margaret Ratner Kunstler, a lawyer who worked with WikiLeaks. According to Credico, Stone told Kunstler that he planned to urge Trump to preemptively pardon Assange.

Mother Jones first reported last year that Stone, in text messages to Credico, had claimed he was attempting to secure a pardon for Assange. “I am working with others to get JA a blanket pardon,” Stone wrote in one January 6, 2018, message. “It’s very real and very possible. Don’t fuck it up.” Stone sent that message, which was placed in evidence by prosecutors during his trial, after Credico mentioned plans to speak to a reporter about his contacts with Stone in 2016. Stone apparently wanted to dissuade Credico from doing that. “Hope u don’t fuck Up my efforts to get Assange a pardon” Stone wrote in another text to Credico, minutes earlier on the same day.

In September 2018 email to Mother Jones, Stone, without offering specifics, confirmed: “I most definitely advocated a pardon for Assange.”

Under Trump, official US policy toward WikiLeaks has not seemed to soften. In April 2017, then-CIA Director Mike Pompeo called the organization a “hostile intelligence service.” Two years later, the Justice Department indicted Assange. But in late 2016, Stone likely had reason to believe that a pardon was at least possible—just weeks earlier, as WikiLeaks released emails damaging to Hillary Clinton, Trump had declared on the campaign trail that “I love WikiLeaks.”

Credico’s recent testimony adds to the pardon story. According to the comedian, Stone first broached the idea of Trump pardoning Assange in late 2016. Credico testified that after Trump’s electoral victory, Stone asked for help reaching Kunstler, who is Credico’s friend, regarding a pardon for Assange. Kunstler, a civil rights lawyer who represents WikiLeaks editor Sarah Harrison, testified at Stone’s trial that her work for Harrison left her functioning in effect as a WikiLeaks’ lawyer.

Stone later made public statements urging Trump to pardon Assange. But his outreach to Kunstler is one of several pieces of evidence presented during the trial indicating that the connections between Trump’s circle and WikiLeaks were more robust than previously known. Rick Gates, a former top Trump campaign aide, testified that he witnessed Trump speaking on the phone with Stone on July 31, 2016, shortly after WikiLeaks released a trove of Democratic National Committee emails. Immediately after hanging up with Stone, Gates testified, Trump told him that “more information would be coming.”

Former Trump campaign CEO Steve Bannon, who also testified against Stone, said the campaign considered Stone to be its “access point” to Assange and WikiLeaks. And Bannon suggested that Trump campaign officials believed Stone was working with WikiLeaks to influence the release of emails. Bannon said that in October 2016, he heard that Stone “was somehow involved” in WikiLeaks releasing emails stolen from Clinton campaign chairman John Podesta.

Stone told Mother Jones last year that he urged Andrew Napolitano, a Fox News personality, to support a pardon for Assange. According to Credico, Stone said he hoped Napolitano would float the idea on Fox or directly to Trump. Credico has also told Mother Jones that Stone claimed to have secured Bannon’s support for an Assange pardon push.

Still, it’s unclear how extensive Stone’s effort really was. Napolitano said in a statement last year that he “categorically denies” working with Stone to get Assange a pardon. There is no evidence Bannon took steps to help Assange. William Burck, a lawyer for Bannon, did not respond to questions about Stone’s alleged claims.

Trump has so far not pardoned Assange, and in May, the WikiLeaks founder was hit with a federal indictment for his alleged role in obtaining and publishing secret military and diplomatic documents in 2010.

The charges against Stone had no direct tie to his efforts to help Assange. Prosecutors crafted a far more narrow case. Stone was convicted of making false statements to the House Intelligence Committee, obstruction of justice, and witness tampering—the latter of which involved Stone pressuring Credico not to provide testimony contradicting Stone’s false claims to Congress.

Credico has said he believes Stone’s talk of securing an Assange pardon, including Stone’s contact with Kunstler in 2016, was part of an effort to dangle a carrot to stop the comedian, a vocal WikiLeaks backer, from disputing Stone’s congressional testimony. “He was trying to get me not to talk,” Credico said.