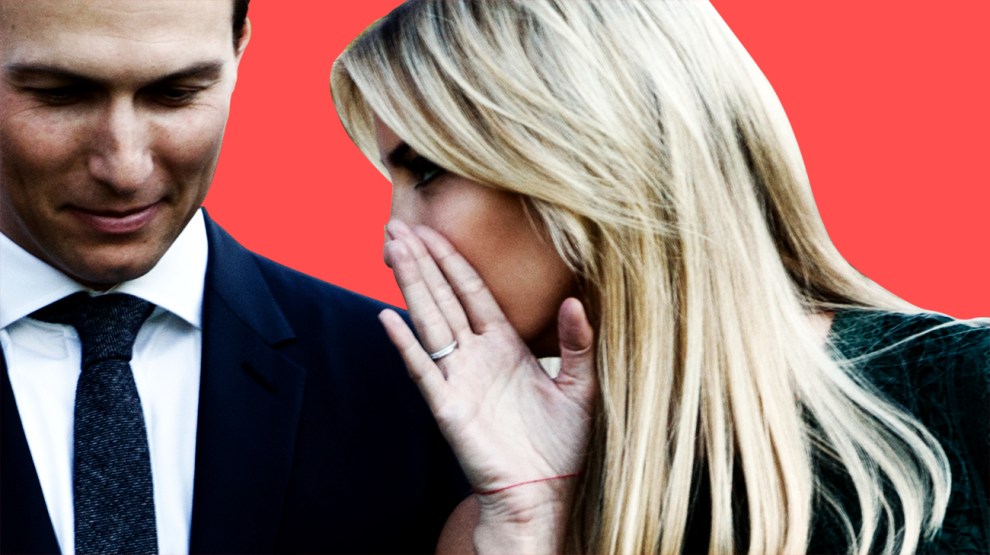 For indispensable reporting on the coronavirus crisis, the election, and more, subscribe to the Mother Jones Daily newsletter.
Outside of a single, breezy tweet invoking Thomas Jefferson to defend her father last month, first daughter and White House adviser Ivanka Trump has been relatively quiet on the topic of impeachment. But she took a moment from her efforts to empower women last weekend to tepidly push back on the president’s demands to publicly identify the whistleblower at the center of his Ukraine scandal. She mostly parroted Republicans’ complaints about impeachment—but some media outlets trumpeted her bold “break” with her father instead.
It was the latest episode in one of the most enduring storylines of the Trump era: Things are going off the rails, but never fear—Ivanka is quietly working behind the scenes to be the least-awful member of the administration, details of which are conveniently leaked to the press:

April 2017: Politico reports that Ivanka has “quietly reached out to” Planned Parent­hood as part of her “listening tour.”

April 2017: Eric Trump tells the Telegraph that a “heartbroken and outraged” Ivanka pushed her father to launch missile strikes on Syria after a chemical attack.

May 2017: Ivanka, who Axios states is “passionate” about climate change, is said to be working behind the scenes to influence her father’s decision to ditch the Paris climate deal.

June 2017: A US Weekly cover story trumpets that Ivanka “will always fight for what she believes in.”

June 2018: CNN asserts that Ivanka “agrees with her father’s sentiments that he hates the family separation issue and doesn’t want it to occur”—though she won’t say anything about it publicly.

October 2018: The New York Times reports that only after “importuning” by Ivanka and Jared did the president speak out against anti-Semitism follow­ing a mass shooting at a synagogue.

April 2019: As Trump threatens to shut down the US-Mexico border, Jared pushes for immigration poli­cies in line with his and Ivanka’s “more moderate positions,” Politico reports.

July 2019: An anonymous source tells CBS News that the president “took heat” from Ivanka after he let his supporters chant “send her back” at a rally.

August 2019: As Trump dithers, Ivanka reportedly has been “quietly calling” lawmakers to gauge their support for new gun laws.

September 2019: Yahoo News reports “rumors” that Ivanka and Jared have suggested replacing Vice President Mike Pence with a woman on the 2020 ticket.