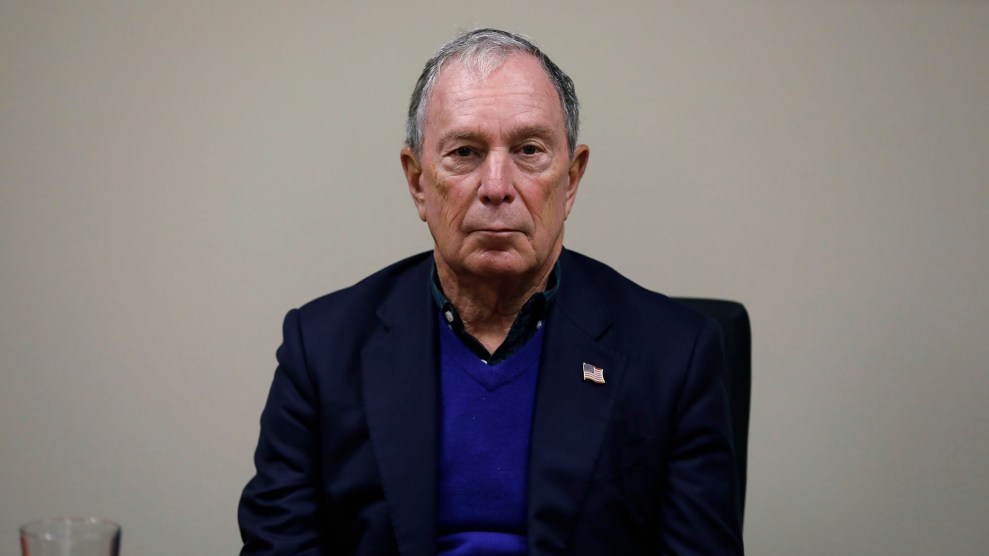 Just when the Democratic presidential primary field was finally small enough to fit on one stage, it’s starting to expand again. In November, Michael Bloomberg, the billionaire media tycoon and ex-mayor of New York City, filed paperwork to enter the Alabama Democratic primary, a first step toward a presidential bid. A week later, former Massachusetts Gov. Deval Patrick entered the race. “You can’t know if you can break through,” he told reporters, “if you don’t get out there and try.”

There’s no real mystery about why two reasonably high-profile candidates think they should jump into the race this late: It’s wide open. National and early-state polls suggest the nominal frontrunner, former vice president Joe Biden, is vulnerable, and Democratic donors are reportedly grumbling about the weakness of the field.

“It’s a waste of his time and money. He’s too late to the game. No one wants to hear from him. He’d be much better to have picked a candidate and backed them. He’s not gonna do squat.”

But in Iowa, where Biden has fallen into third place, the news of the new arrivals was met with a collective shrug. Bloomberg received 2 percent in a Des Moines Register survey released Saturday (Patrick’s entry came too late for the poll), and he was the second choice of just 1 percent of respondents. If anything, those numbers seem high. In dozens of conversations I had with Iowa voters this month, many knew very little about the late entrants, and I couldn’t find anyone who was eager to learn more.

Bloomberg, in particular, came in for criticism from Iowa voters because of his personal wealth and big-city credentials, as well as his late arrival.

“It’s a waste of fucking time,” said Alex Winder, who was waiting for Vermont Sen. Bernie Sanders to speak in Coralville. “What traction is he hoping to find in the Midwest, especially among middle-class voters?”

Others were more PG, but no more charitable. Steve Wilkins, a retired sheriff’s deputy from Ida Grove, said he was looking for the Democrat with the best chance of beating Trump, when we spoke at a small meet-and-greet with Jill Biden, the former vice president’s wife. But that candidate wouldn’t be Bloomberg.

Listen to Tim Murphy describe the reaction of Iowans to Bloomberg’s entry into the race, on this episode of the Mother Jones Podcast:

“I think he’s running on his own ego,” he said.

Bryan Johnson, a Martin O’Malley voter in 2016 (yes, they did exist), likened Bloomberg to Tom Steyer, another billionaire vying for the Democratic nomination. “I think [Bloomberg’s] really out of touch…It’d be hard to connect with the voters, I think.”

“It’s a waste of his time and money,” said Mike Alowitz, who was attending Sanders’ climate rally in Des Moines but was looking for someone more moderate to get behind—making him, in theory, the kind of voter who might gravitate to Bloomberg. “He’s too late to the game. No one wants to hear from him. He’d be much better to have picked a candidate and backed them. He’s not gonna do squat.”

“I think there’s just too many candidates,” said Mike Mann, an undecided voter who had dropped by the same event. “There’s too many. And it’s tough, you want to hear good ideas from everybody, but it gets really congested.”

After Patrick entered the race, I started asking voters about both of them, but the answers stayed the same.

Dau’s sentiment was a common one. Voters believed the field was too unwieldy to begin with, and most could rattle off multiple candidates they liked. New faces were the last thing anyone wanted.

“I think they’re a little late,” said Elizabeth Texley, who was trying to decide between Massachusetts Sen. Elizabeth Warren, Buttigieg, and Klobuchar. “I’m trying to weed out people, not add people.”

Jen Gilbert of Cedar Falls echoed that sentiment. “Not into them,” she said. “The field is already too crowded. It should be narrowing down. It’s too late!”

“Stop, please!” pleaded Michael Winchester of Cedar Rapids. “This is insane. How many people are running?”

Michele Gardner, a Chicagoan who was in Waverly for a college sporting event, brought up Bloomberg’s history of degrading comments about women, which he apologized for last week (through a spokesperson), and Patrick’s work for Bain Capital, the private equity firm co-founded by Mitt Romney.

I filled notebooks with this stuff. Patrick, at least, is hoping to change some minds—on Monday, he made his first visit to Iowa, with stops in Cedar Rapids and Des Moines. But Bloomberg intends to skip the first-in-the-nation caucus altogether if he formally enters the race. Based on my conversations, that’s probably for the best.