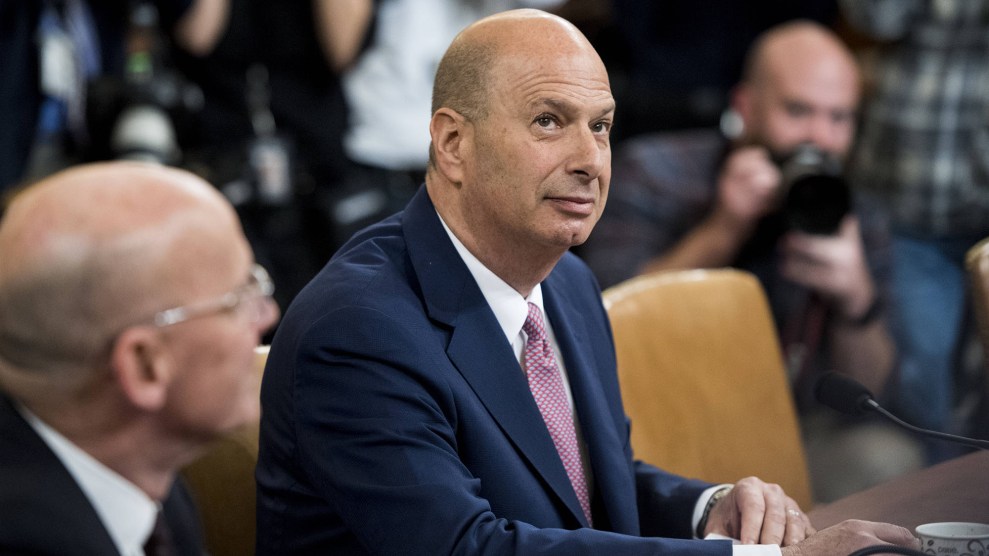 The highest-ranking Democrat on the Senate Foreign Relations Committee on Tuesday asked the State Department to investigate the lax approach to operational security displayed by Ambassador Gordon Sondland and others with their cavalier use of cell phones.

“You can almost take it to the bank that the Russians were listening.”

Sen. Robert Menendez, a Democrat from New Jersey, wrote in a November 19 request that Sondland’s use of a private cell phone to conduct a “highly sensitive conversation with the President of the United States” was alarming and should be investigated. The letter makes reference to a call that Sondland, the US’s ambassador to the European Union, had with President Donald Trump the day after Trump spoke with Ukrainian President Volodymyr Zelensky and requested investigations that would benefit him politically. The call took place in a restaurant in Kyiv and the president’s voice was loud enough for others at the table, including a US embassy official who has offered testimony to the impeachment inquiry, to hear the president’s voice.

“This incident is a serious breach that raises significant counterintelligence concerns as well as concerns about State management of information security more generally,” Menendez wrote. “In an area of the world where kompromat, ‘compromising information,’ is a political norm, with longstanding and sophisticated roots, this episode is staggering in its recklessness.”

Sondland, one of the key players in the sprawling Trump impeachment drama, said in public testimony Wednesday before the House Intelligence Committee that he “did not discuss any classified information” during his phone call at the restaurant.

When asked if he was concerned that foreign nations might listen in on his phone calls with the president, he said he has “unclassified conversations all the time from landlines that are unsecured and cell phones. If the topic is not classified, it’s up to the president to decide what’s classified and what’s not classified. He was aware that it was an open line as well.” Later in the day, Rep. Jim Himes (D-Conn.) said that he expected a transcript of the call to emerge, perhaps after having been obtained by a foreign intelligence service.

Menendez’s letter cited “the embarrassment, political fallout, and official US apology that followed” the 2014 Russian release of audio of a phone call between American diplomats discussing rifts between the US and the European Union over Ukraine. During the call, then-US Ambassador to Ukraine Victoria Nuland said “fuck the EU,” a comment for which she ultimately apologized.

Sondland’s informational and operational security has come under sharp criticism since the call was revealed November 13 by acting US Ambassador to Ukraine Bill Taylor. Larry Pfeiffer, a former senior director of the White House Situation Room and a former chief of staff to the CIA director, told the Washington Post that the “security ramifications are insane,” and that in “a country that is so wired with Russian intelligence, you can almost take it to the bank that the Russians were listening.”

David Holmes, the US embassy staffer who overheard the call, told the committee in his private testimony that the restaurant phone call was “surprising to me,” because, “generally, phone calls with the President are very sensitive and handled accordingly.” He noted that the majority of cell phone networks in Ukraine are in Russian hands, and that US officials “generally assume that mobile communications in Ukraine are being monitored.”

He added that the call “was an extremely distinctive experience in my Foreign Service career,” and that he’d “never seen anything like this, someone calling the President from a mobile phone at a restaurant, and then having a conversation of this level of candor, colorful language.”

Fiona Hill, a former Trump adviser on Russia, told the committee that she, too, was concerned with Sondland’s operational security. She said that Sondland would routinely give out US officials’ private cell phone numbers to other nations’ officials. “Some of it was comical,” she said, but also, “deeply concerning.” She said that his actions with regard to personal cell phones was dangerous because “all of those communications could have been exfiltrated by the Russians very easily.”

Sondland’s cavalier use of private cell phones and WhatsApp, while concerning to intelligence officials, is not abnormal among senior Trump administration associates and the president himself. Jared Kushner, the president’s son-in-law and a key adviser, reportedly uses WhatsApp to speak with foreign leaders. Rudy Giuliani, the president’s private attorney and another key player in the impeachment drama, has had repeated security gaffes involving his own private cell phone, including butt-dialing reporters and accidentally texting what’s likely his own password to unintended recipients.

Read the letter below: