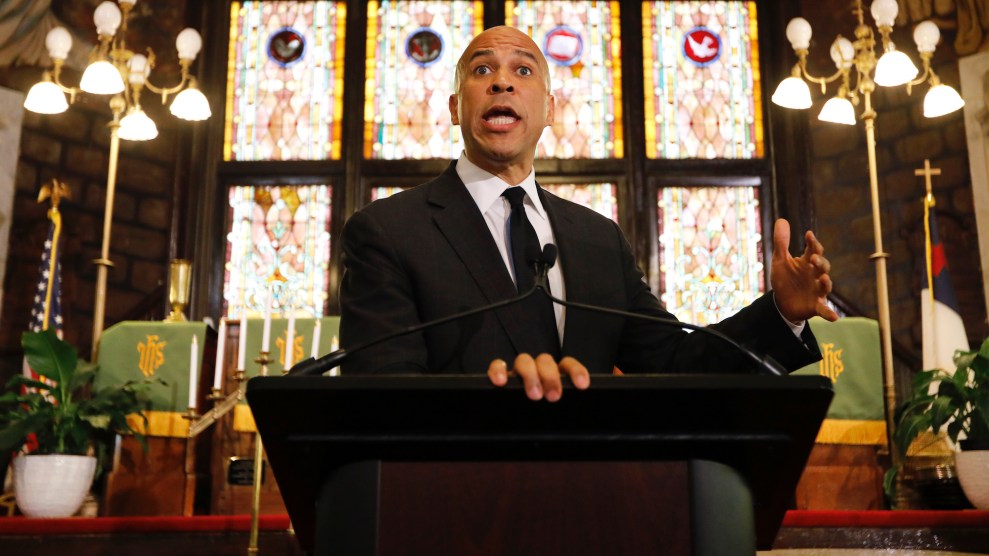 When Cory Booker swung through South Carolina’s Lowcountry for a 25-hour whirlwind campaign tour earlier this month, he dedicated a portion of nearly each of his stops to boost another political candidate. “One of the people running for Senate in your state is a guy named Jaime Harrison,” Booker told a crowd at a brewery in Charleston.

In many respects, Booker’s shoutout was a favor to an old friend. Harrison, the Democrat likely to challenge Republican Sen. Lindsey Graham next year, met Booker when Harrison was a sophomore at Yale; Booker, then a Yale law student, lived in Harrison’s dorm as a graduate fellow. But it also signaled Booker’s affinity with a potentially potent force. Harrison, a past chair of the South Carolina state party, got his start in politics working for Rep. Jim Clyburn, the House’s third-ranking Democrat who leads a prominent cohort of Black South Carolina Democrats centered around the 13-term congressman. And Booker has shown a kinship for that lineage as he tries to boost his presidential hopes in the early primary state.

Clyburn is something of a kingmaker whose influence among South Carolina Democrats is hard to overstate. He was the first Black South Carolinian elected to federal office since Reconstruction, a legacy that especially matters in a state where over 60 percent of the electorate is Black. Clyburn contributes hundreds of thousands of dollars to Democratic causes in the GOP-dominated state, and gave the seed money for a fellowship named in his honor aimed at cultivating the next generation of South Carolina Democratic leaders. Some of his signature contributions include provisions in the Affordable Care Act that bolster rural clinical care and the creation of a regional water authority to ensure poor communities in his district have access to clean drinking water.

“Particularly for some in the African American community, especially for poor and rural South Carolina, [Clyburn] is one of the most consequential leaders elected in the state in the 20th century,” Harrison tells me. “He has been the engine and the glue that has kept this party alive.” (Harrison, as an associate chair of the DNC, is not endorsing any presidential candidates.)

Listen to Kara Voght describe how Cory Booker is tapping a robust Democratic party machine in South Carolina, and discuss whether it can make any difference in a very crowded primary field, on this episode of the Mother Jones Podcast:

Over his 26 years in Congress, Clyburn has also helped to create a deep well of talent thanks to his roles in House leadership—first, as the leader of the Democratic caucus, and later, the whip—and Booker’s staff is full of what one DNC member described to me as a veritable “dream team” of Clyburn alumni. Booker’s state director, Christale Spain, a former executive director of the state party and alum of Bernie Sanders’ 2016 campaign, did a stint in Clyburn’s office before joining Booker’s campaign. Clay Middleton, a DNC member who’s a senior adviser for Booker’s southern states strategy, served as the Lowcountry director for Clyburn’s House office.

And it’s not just staff: Booker’s platform hails from a similar ideological line as the Clyburn wing of South Carolina politics, one that hinges in large part on the acknowledgement that Americans of color have suffered generations of injustice at the hands of the federal government. The centerpiece of Booker’s economic justice platform is his “baby bonds” proposal, which would grant every American-born baby a government-backed savings account, an idea experts say would close the racial wealth gap. Clyburn, who has joined a number of the Senate’s 2020 hopefuls on their legislation, introduced the House version of the legislation. There’s a personal piece, too. Booker’s father’s family hails from area near the border that separates North and South Carolina, and he spent his childhood coming down to the state. “It’s like home when I come here,” Booker tells me.

In between forums attended by majority-white audiences in downtown Charleston this month, Booker made a stop at the Turning Leaf Project, a non-profit in predominantly Black North Charleston that works to reduce recidivism. In a classroom of a dozen formerly incarcerated men, most of them Black, Booker struck the pose of a relaxed teacher, leaning on a desk in front of a room as he explained, with characteristic vigor, what he blamed for America’s high incarceration rate. He talked about the lack of jobs that pay a living wage, environmental injustice, and lax accountability measures for law enforcement. His audience held onto every word, treating Booker like a peer as they interrogated the plans he laid out.

When I asked if spending over an hour with just a dozen people might not be the best use of campaign time, Booker reminded me that, during his first Senate run, his pollster similarly disagreed with him on the value of talking about criminal justice on the campaign trail. “These are the issues that really speak to my soul, and I think they are existential threats to our country,” Booker says. “The values of this campaign are going to be consistent in a lot of things we do with the time.”

So far, that hasn’t translated into any bump in polls. A Quinnipiac University survey in the days after Booker’s Charleston-area appearance put him at just 2 percent among voters in the state. And Booker likely needs to win South Carolina if his presidential candidacy is to be viable. So far, his campaign is banking on a decent showing in Iowa that generates enough momentum to keep him going until the Palmetto State contest. The campaign hopes 2020 ends up like 2008, when Black voters were consistently with Hillary Clinton in early polls until Barack Obama bounced up in Iowa. These days, they’re sticking with Biden, but Booker’s team is hoping that the support is as tenuous as it was for Hillary in ’08.

Clyburn has promised not to endorse any candidates in the South Carolina primary. Back in June, he said he experienced “a little bit of amazement” as to why neither Booker nor Harris, the presidential race’s two Black candidates, had not fared better in his home state. “I thought for sure there would be more of a surge and I can’t quite figure that out yet,” he said.

For now, Booker holds out hope that building up his grassroots efforts in the state may still payoff. “I don’t mind losing on my message because I’m not changing my message,” Booker told me. “But I just want to make sure that people get a chance to know me before they make any kind of final decision.”