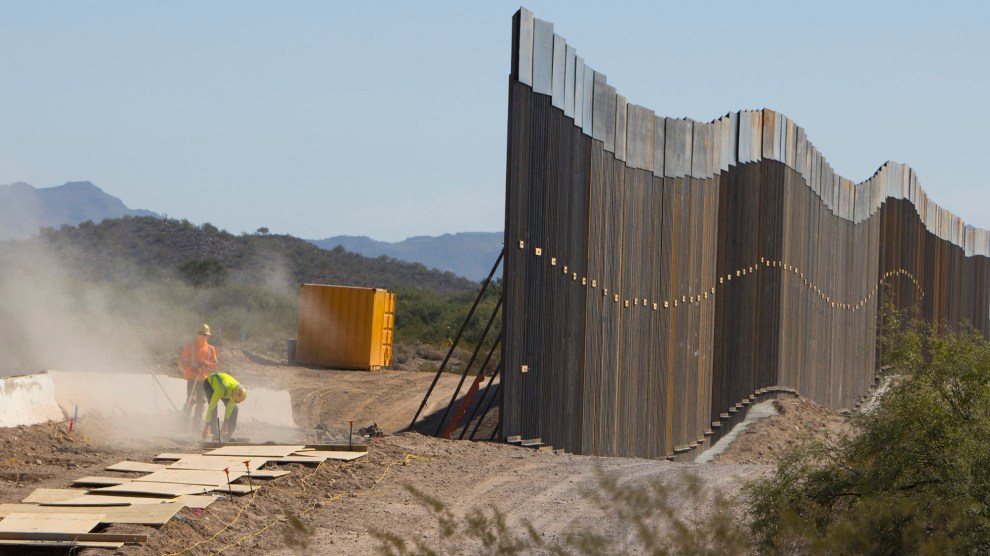 As the Democratic controlled House and the Republican held Senate move forward with contentious negotiations over the next federal budget, a group of Democratic Senators have called on their Republican colleagues in both bodies to approve additional election security funding.

According to a Democratic House aide familiar with the negotiations, funding President Donald Trump’s border wall has emerged as a key rival to providing funds to protect voting.

“The appropriations process has been hung up over dividing funding among subcommittees, with House Democrats pushing for adequate funding for domestic priorities instead of President Trump’s wasteful border wall,” the aide told Mother Jones, who explained that final amount of election security funding would be negotiated after overall allocations were set.

The two sides are working to bridge the gap between the $600 million approved by House Democrats in June and the $250 million proposed by the Republican-led Senate in September. Even the $600 million figure would be well short of what’s needed: A full upgrade of the country’s vulnerable and outdated election systems could cost as much as $2.2 billion over five years, according to an analysis from the Brennan Center, which costed out investments in local cybersecurity, upgraded voter registration systems, securer voting machines, and post-election audits. Democrats have been frustrated with Sen. Mitch McConnell’s hold on most election security legislation in the wake of the 2016 election, accusing the senate majority leader of failing to take up the matter, in part, because President Donald Trump sees it as an admission that his 2016 election was tainted.

In a letter sent Monday to the leadership of the two congressional appropriations committees, 38 Democratic senators, and Sen. Angus King, an independent senator from Maine, implored the two committees to approve additional funding.

The letter also called for increased funding for the Election Assistance Commission, the federal body tasked with coordinating voluntary election security standards and administering election security grants. The agency’s budget has fallen from $18 million in 2010 to $8 million in 2019, and now operates with only half its 2010 staff level. House Democrats seek to fund the agency at $16.2 million, while Senate Republicans have offered $12 million.

“The 2020 elections are less than a year away and Mitch McConnell continues to block every meaningful proposal to secure American elections against foreign hacking. Time is quickly running out to make a difference before next November,” Sen. Ron Wyden (D-Ore.) told Mother Jones on Tuesday. “Mitch McConnell needs to drop his one-man blockade and let the Senate pass real reforms to protect Americans’ votes.”