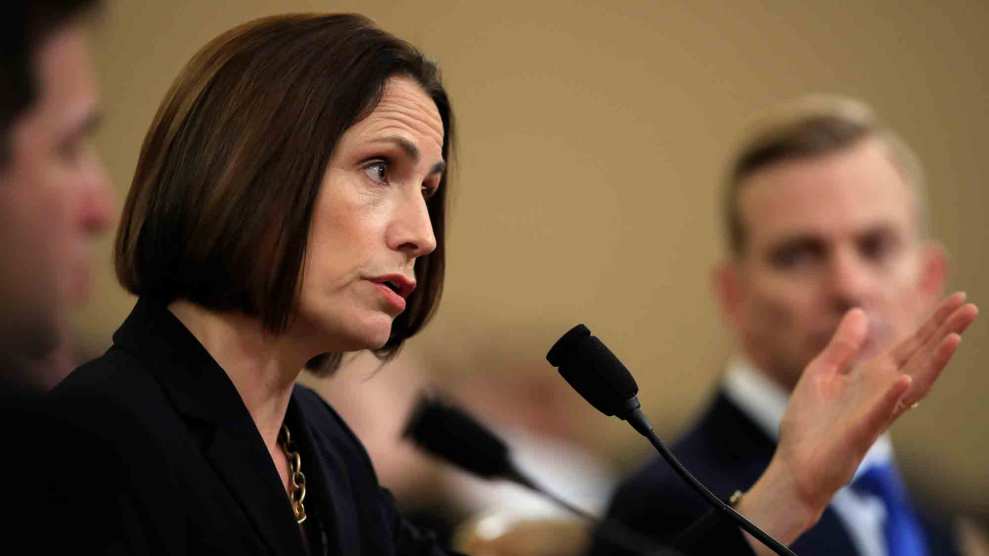 It’s all about Russia. Or mostly.

The fifth day of the House impeachment hearings on Thursday brought two consummate policy professionals to the witness stand. Each had a clear tale, from different perspectives, of the Trump-Giuliani operation to circumvent normal national security channels to muscle Ukraine into announcing the launch of investigations of Joe Biden and his son’s activities in Ukraine and of the debunked conspiracy theory that Ukraine intervened in the US election in 2016.

David Holmes, a top foreign service officer serving in the US embassy in Ukraine, recounted the months-long effort on the part of Rudy Giuliani and Ambassador Gordon Sondland to squeeze a “Burisma-Biden” investigation out of the Ukrainians. He noted, “It was made clear that some action on a Burisma-Biden investigation was a precondition for an Oval Office meeting.” Former senior National Security Council staffer Fiona Hill, a Russia expert, recalled how she and her boss, John Bolton, the national security adviser, saw Giuliani’s outside-channel scheming as a problem that could blow up. Once again, witnesses who had a front-row seat to the Trump-Giuliani production told the House Intelligence Committee that Trump was leveraging the power of his office—preventing a White House meeting with Ukrainian president Volodymyr Zelensky and withholding nearly $400 million in security assistance for Ukraine—to generate political dirt that could taint a political rival and absolve Moscow.

Their stories boosted previous testimony and further undermined the Republicans’ contention that there was “no linkage,” as committee member Rep. Jim Jordan (R-Ohio) has often bellowed. (When I asked him on Thursday if he still believes there was no “linkage,” he grimaced and walked past me.) But what made this hearing different from the previous sessions was that a witness went after a major Republican talking point—and demolished it. And she essentially accused Rep. Devin Nunes (R-Calif.), the senior Republican on the committee, and his GOP colleagues of being useful idiots for Vladimir Putin.

Throughout these hearings, Nunes has been trying to divert attention from the Trump-Ukraine scandal by throwing up a variety of alternative narratives. Trump withheld the aid because he was concerned about corruption in Ukraine. The Biden-Burisma controversy is the real scandal. The Democrats’ refusal to call the Ukraine whistleblower to testify is nefarious and shows their investigation is a Deep-State sham. And Ukrainian meddling in the 2016 election is being covered up. That last point has been especially noxious, for, as Rep. Adam Schiff (D-Calif.), the chairman of the committee, noted, the Republicans’ nonstop harping on this creates the impression that “Russia didn’t intervene…it was all the Ukrainians.”

What’s the basis for the Ukrainians-did-it idea? A few Ukrainian officials during the 2016 campaign did make public remarks criticizing Trump. But that was hardly surprising, given that Trump had suggested he might accept Putin’s occupation and annexation of Crimea. And there was a Ukrainian investigative journalist serving in the parliament who had produced and spread information about Trump campaign chairman Paul Manafort, who had made millions as a consultant for a corrupt, pro-Russia Ukrainian president. Not surprisingly, Democrats and reporters in the United States were interested in that material. But it’s a stretch to characterize any of this as a covert operation to intervene in an US election or equate it with the systemic and sweeping Russian assault—comprised of an extensive clandestine social media campaign and a hack-and-dump operation—that was designed to subvert American democracy to aid Trump. Still, Republicans have tried to do so.

And Hill would have none of it. In her opening statement, Hill, who served as the national intelligence officer on Russia and Eurasia for Presidents George W. Bush and Barack Obama, dragged Nunes and his colleagues: “Some of you on this committee appear to believe that Russia and its security service did not conduct a campaign against our country—and that, perhaps, somehow, for some reason, Ukraine did. This is a fictional narrative that has been perpetrated and propagated by the Russian security services themselves.” She continued with the obvious: “The unfortunate truth is that Russia was the foreign power that systematically attacked our democratic institutions in 2016.”

Hill observed that Putin has achieved his aim: “The impact of the successful 2016 Russian campaign remains evident today. Our nation is being torn apart. Truth is questioned. Our highly professional and expert career foreign service is being undermined.” This was a clear dig at the right-wing assault on the witnesses who have appeared for these hearings and on the so-called Deep State at large.

She went on: “I refuse to be part of an effort to legitimize an alternative narrative that the Ukrainian government is a US adversary, and that Ukraine—not Russia—attacked us in 2016. These fictions are harmful even if they are deployed for purely domestic political purposes. President Putin and the security services operate like a super-PAC. They deploy millions of dollars to weaponize our own political opposition research and false narratives. When we are consumed with partisan rancor, we cannot combat these external forces as they seek to divide us against each another, degrade our institutions, and destroy the faith of the American people in our democracy.” (Several Republican committee members have repeatedly insisted that Trump was justified in withholding the security funds for Ukraine because he rightly believed the Ukrainian government had previously opposed him.)

And Hill shared a dire warning with the committee: “Right now, Russia’s security services and their proxies have geared up to repeat their interference in the 2020 election. We are running out of time to stop them. In the course of this investigation, I would ask that you please not promote politically driven falsehoods that so clearly advance Russian interests.”

In a polite way, Hill was rendering a harsh judgment. She was telling the Republicans that they have been aiding and abetting Putin. They have hyped the unfounded idea that Ukraine improperly and extensively messed with the 2016 campaign, emphasizing that claim over consideration of the real Russian attack. And they have consistently referred to the “Russia hoax” (as Trump has done)—which diminishes the significance of Putin’s assault. This sort of talk, she was saying, tracked with Moscow’s own propaganda and buttressed Russia’s effort to deny it attacked the election to assist Trump. (Putin has maintained that Ukrainians are the real meddlers.) When questioned by Schiff, Hill said, “The Russian interest is to delegitimize our entire presidency.” And she reiterated that Moscow had succeeded: “This is exactly what the Russian government was hoping for. They seed misinformation, they seed doubt…They would create just the kind of chaos that we have seen in our politics.”

This was a damning indictment of the Republicans: They have been amplifying Putin’s signal. But she ignored one aspect of this GOP stance, namely that it bolsters Trump’s view and serves his interests. Trump has never fully acknowledged that Russia mounted a wide-ranging operation to help land him in the White House. The claim that Ukraine interfered assists Trump’s never-ending effort to discount or dismiss the Russian attack.

In fact, Trump is in this impeachment fix partly because he was eager to obtain information to support the idea that Ukrainians were the real culprits of 2016. During his July 25 call with Zelensky, the first “favor” Trump asked for was an investigation of the conspiracy theory that the Democratic National Committee was not hacked by Russia and that Ukraine was somehow involved and was covering it up. Trump was pursuing the goal of wiping the Russia stain off his 2016 victory—which meant letting Putin off the hook. After Zelensky indicated the Ukrainians would look into this, Trump then moved to “the other thing” and requested an investigation of Biden and Burisma.

At the hearing, the Republicans responded to Hill’s criticism by noting that when they controlled the committee, they released a report confirming that Russia intervened in 2016. But that report left out an important element: It refused to endorse the conclusion of the intelligence community that one goal of that operation was to elect Trump. And then Nunes actually provided proof for Hill’s implied case that he and the Republicans are helping Russia. When he had a chance to question the witnesses, Nunes asked them about Ukrainian opposition to Trump in 2016 and the Steele dossier as part of his now-common practice of declaring (falsely) that the Russia investigation was a sham orchestrated by the Democrats. In front of Hill, he was engaging in the very activity she had cautioned against: He was delegitimizing the FBI’s Russia investigation.

Then Jordan delivered the most up-is-down moment. Noting that he had an example in sync with Hill’s testimony about Russia’s desire to sow discord in the United States, Jordan claimed that Russia had orchestrated the Steele dossier (it did not) to create chaos and that this ploy worked because the Steele dossier led to the FBI’s Russia investigation (it did not) and that the FBI investigation led to Special Counsel Robert Mueller’s investigation and that phony investigation has caused serious political divisions in the United States. It was quite a feat: characterizing an FBI investigation of Russian wrongdoing as a Russian-triggered operation to screw up American politics.

Hill and Holmes were impressive witnesses who patiently and carefully recalled what they saw and heard. Their testimony showed that Trump and his irregulars did lean on Ukraine to produce information that could clear Russia of interference in the 2016 election and help Trump survive the election of 2020. But unfortunately for Hill—and the nation—the day confirmed her worst fears. Republicans demonstrated they would keep on advancing Putin-friendly false narratives, undermining and disregarding government professionals, and questioning the truth. The session revealed not only that Trump had corrupted US national security policy for his own personal advantage, but that there is a bigger problem: The Russian operation that worked in 2016 continues to poison US politics.