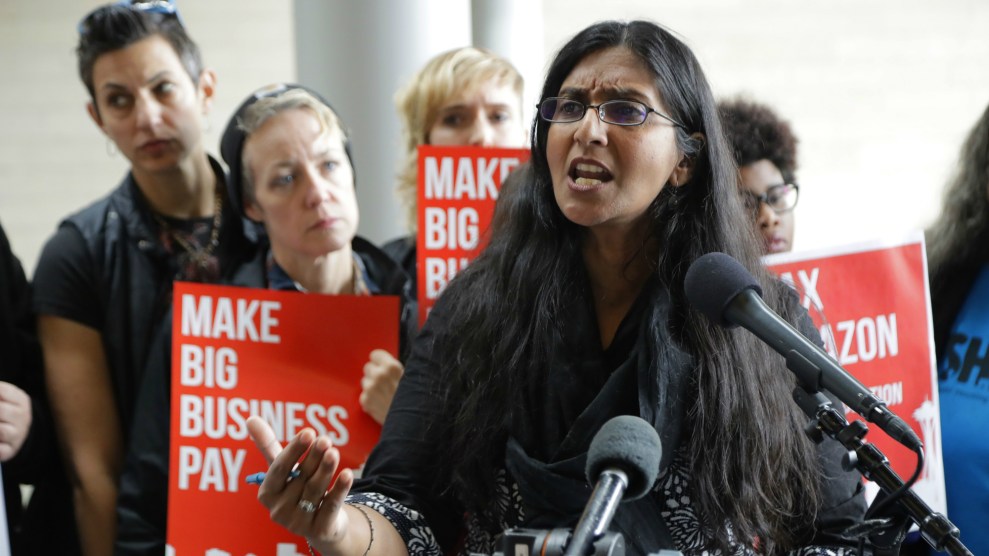 Update, November 11, 2019: On Saturday, Kshama Sawant declared victory in her Seattle City Council race. She called her election “a repudiation of the billionaire class” in front of a banner that said, “TAX Amazon.”

When Amazon pumped $1.5 million into influencing Seattle’s City Council elections in its final weeks—a rather startling bump on the $25,000 spent four years ago, according to Reuters—it begged the question: Can Amazon buy an election? (And, uh, is Prime delivery worth your complicity?)

Jeff Bezos and Amazon think they can buy elections.

Show Amazon that they can't buy our democracy and that their corporate greed won't stand. Get out and vote!

The main race to watch was that of Kshama Sawant, a socialist who led an attempt to impose a “head tax” on rich technology companies in the form of a per-employee charge on large corporations making more than $20 million per year. It was passed in 2018, and then quickly repealed by the council, but it got the attention of tech giants in town like Amazon and Microsoft.

At first, it appeared she lost her bid for reelection, and that Amazon had flipped the seat. But this afternoon, as the votes have trickled in, Sawant took the lead—edging over 50 percent. As KUOW reported, several of the candidates supported by Amazon’s money are trailing. (There is another round of votes to be dropped into the results this Friday evening at 8 p.m..)

Even so, the Amazon-bought-the-election narrative doesn’t quite fit. Sawant’s opponent, Egan Orion, told local outlets he wished Amazon had stayed out of it. “In my race, it was completely unnecessary,” he said. “We had record fundraising.”

Not to be too Kai Ryssdal, but let’s just run some numbers on how crazy it got. About 74,000 people are registered to vote in Seattle’s District 3. Orion raised $402,056; Sawant raised $523,056. According to public filings, Orion netted nearly $420,000 in independent expenditures. Notably, the PAC that Amazon was funneling the big bucks to, Civic Alliance for a Sound Economy (CASE)—associated with the Seattle Chamber of Commerce—gave $278,891 to Orion, but they also gave around $20,000 to Sawant too, weirdly. People for Seattle, another business affiliated PAC, added another $40,463 to Orion; Sawant’s independent expenditures totaled $22,044.

That is—if you include both candidates—more than $20 per registered voter.

Once the vote total comes in on Friday night, it could be even higher, if we make the bold assumption that not everyone registered actually cast a ballot.

As I wrote in October, there has also been a tension between the flood of money from independent expenditures and a new public financing model called Democracy Vouchers, which aims to calm (if not actually defeat) the influence of corporate cash by giving each Seattle resident up to $100 for political spending.  Some critics expressed concern that it only further motivated powerful PACs and corporations to invest in local races. Locally, it seemed Sawant’s leftist persona (which leans to Trotskyite) had ignored the ire of the tech companies, inspiring a flood of cash. We noted in earlier reporting that the technology upper crust certainly pitched in:

People for Seattle, a PAC close to the Chamber of Commerce that has nearly $400,000 in contributions from tech executives like Tom Alberg (Amazon), John Stanton (“wireless pioneer“), Christopher Larsen (Microsoft) has circulated flyers that call Sawant an “extremist.”

Whatever the case for the money surge, what seems surprising is that it still fell short. Sawant looks primed to win; one of the candidates CASE gave the most to, Jim Pugel, a former police chief, is behind too. (Pugel got less coverage than Orion’s claim to beat Sawant, but he received a $319,600 boost from CASE and $135,835 from People for Seattle.)

Perhaps Seattle will see a return of the head tax after all.