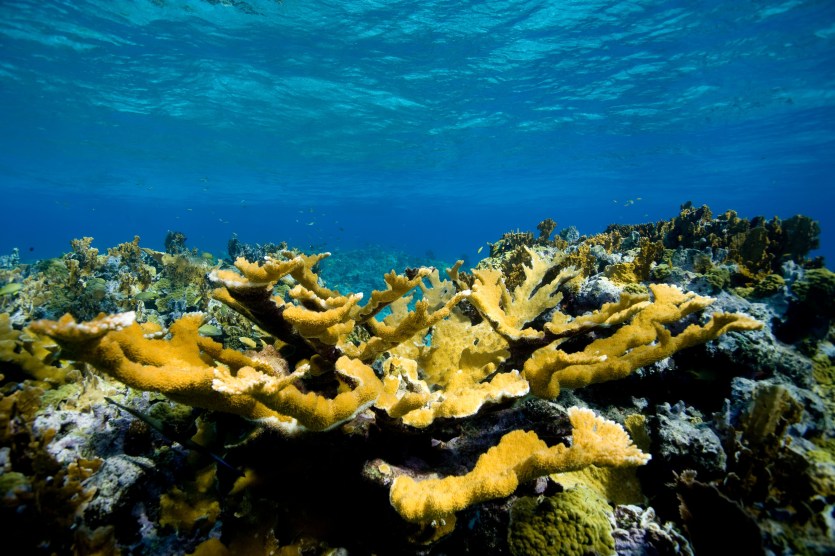 This story was originally published by the HuffPost and appears here as part of the Climate Desk collaboration.

As the people of the Bahamas struggle to recover from Hurricane Dorian, the strongest storm in the nation’s history, a team of scientists is setting out to assess the damage to the vibrant coral reefs that are key to the islands’ fisheries and tourism-dependent economy.

The Perry Institute for Marine Science, a research organization based in Vermont, began post-hurricane surveys on Monday. It plans to visit numerous sites around Grand Bahama and the Abaco Islands over the next few weeks, taking the first comprehensive look at Dorian’s impact below the surface.

“We’ve never had a storm of this magnitude and that’s lasted so long,” Krista Sherman, a marine scientist at the Perry Institute, told HuffPost.

Dorian made landfall Sept. 1 in the Abaco Islands before stalling over Grand Bahama for 30 hours. The storm battered the islands with sustained 185 mph winds and a storm surge of more than 20 feet, leveling entire neighborhoods and leaving some 70% of Grand Bahama underwater. Scientists say above-average ocean temperatures fueled the storm, which more hurricanes are expected to resemble as the world warms.

Coral in this part of the Atlantic and in the Caribbean evolved to survive hurricanes. But like reefs around the globe, they face a slew of environmental threats, from heat-induced bleaching and disease to pollution runoff and overfishing.

“There are all these threats that they are having to deal with that historically they didn’t have to deal with,” Sherman said. “They are not recovering as quickly and in the same way because they are under this constant stress.”

A 2016 report from the Perry Institute and several other organizations assessed more than 200 reefs in the Bahamas and concluded that the nation’s reefs as a whole are “imperiled.”

“However, with more than 24 hours of a Category 5 storm, lots of the massive corals will be scoured by sand and rubble or broken loose and turned over,” Eakin said. “This was a catastrophic storm, so the damage to the reefs may be catastrophic as well.”

Branching corals, those species that feature numerous tree-like branches, likely sustained the most damage from Dorian, Eakin added ― but they grow back much more quickly than massive corals.

Cyclones have the potential to wreak havoc on reef ecosystems. Hurricane Walaka, which ripped through the northwestern Hawaiian Islands last year as a powerful Category 3 storm and wiped an 11-acre island off the map, provided one of the most sobering recent examples. In August, federal researchers returned from a 22-day expedition to report that the reef at French Frigate Shoals had been completely destroyed, reduced to a field of rubble.

“It is unknown whether the corals will grow back, or if they do, how long it will take,” NOAA wrote in a press release at the time.

Human-caused climate change threatens to end coral reefs as we know them. It has caused mass bleaching events, in which heat-stressed corals turn white after expelling the algae that provide most of the coral polyps’ energy. In many cases, the polyps die. Nearly 30% of Australia’s Great Barrier Reef was killed off by bleaching in 2016 alone.

And the latest federal climate assessment, which the Trump administration released last November, concluded that the loss of unique coral reef ecosystems “can only be avoided by reducing carbon dioxide emissions”―something the White House has shown no interest in pursuing.

A 2005 report from the Global Coral Reef Monitoring Network, assessing reef damage in the Caribbean after historic bleaching and hurricanes that year, concluded: “Coral reefs have experienced these effects of hurricanes and survived for millions of years; however, in light of the rapidly changing climate, the ability of corals to recover from severe storms, while facing the combined effects of increasing thermal stress and ocean acidification, could be extinguished.”

That could prove disastrous for coastal communities in the Bahamas and elsewhere that rely on reefs for food, tourism and shoreline protection.

Tourism accounts for roughly 50% of the Bahamas’ gross domestic product, much of which is tied to fishing, diving and other reef-related activities. A 2018 report from the Nature Conservancy, an environmental group, found that more than 1 million visitor trips to the Bahamas each year are directly tied to the islands’ coral reefs.

Additionally, a Stanford University study last month found that the loss of reefs and mangrove forests in the Bahamas could lead to a tripling of storm-related damages.

“We see that on populated islands like Grand Bahama and Abaco, natural habitats provide protection to disproportionately large numbers of people compared to the rest of the country,” Katie Arkema, a co-author of the study and a lead scientist at Stanford’s Natural Capital Project, said in a release. “Without them, the destruction from Dorian could have been even worse.”

The Perry Institute’s post-hurricane work is expected to include photographing specific coral colonies to compare them to past images, and collecting data that could be used to inform future restoration efforts. The group plans to post periodic updates to its website and social media pages.

“Hopefully we can get out there and assess the extent of the damage and see what we can do,” Sherman said.