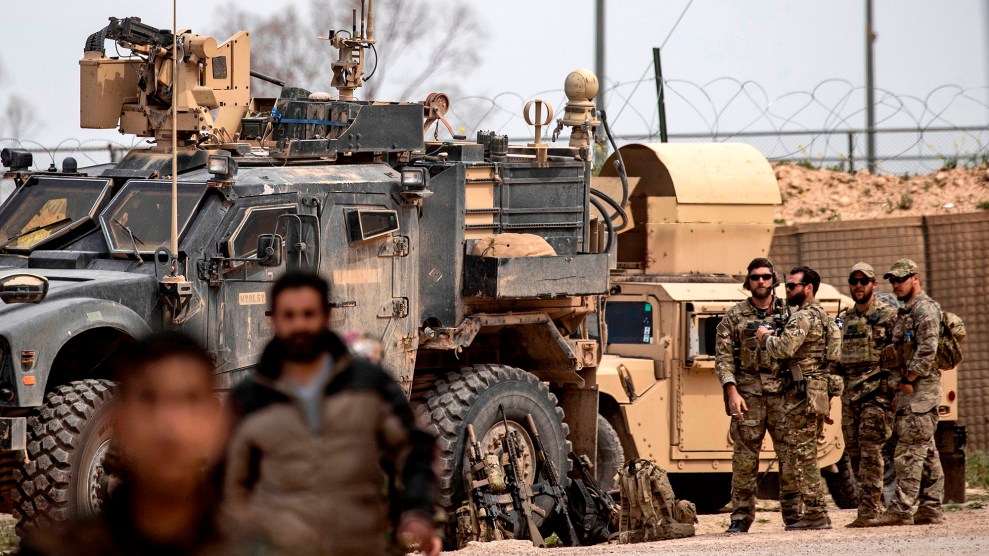 US soldiers at the Omar oil field in eastern Syria in March 2019.Delil Souleiman/Getty

As he announced the death of ISIS founder Abu Bakr al-Baghdadi this morning, President Donald Trump reiterated his desire to keep some US troops in Syria to secure control of its oil. “The oil is so valuable,” he said. ISIS had profited from Syria’s oil, he noted, and now the Kurds could benefit from it. And, he added, “We should be able to take some also.”

Trump then repeated his assertion that the United States should have seized Iraq’s oil when it invaded that country in 2003. “I said keep the oil. If they are going into Iraq, keep the oil. They never did.” That echoed Trump’s longstanding belief that US military intervention in the Middle East should treat oil as a spoils of war, as summed up in this 2012 tweet:

Even before Trump’s latest statements, US forces had helped Kurdish-led forces retake and hold onto oil and gas fields in eastern Syria. (Mother Jones‘ Shane Bauer offers a detailed look at the battle for Syria’s energy in his recent investigation into US involvement in the country.) Yet while Syria’s fossil fuels may be strategically important, they aren’t the economic windfall Trump seems to think they are.

Syria’s oil industry has crashed since the civil war started in 2011. Last year, the country produced around 28,000 barrels a day—one fifteenth of its 2010 production and a measly 0.03 percent of the world’s total output.

In his remarks, Trump acknowledged that Syrian oil production is currently tiny. “It’s big oil underground but it’s not big oil up top,” he said. But that “big oil underground” isn’t all that big, either: According to the Energy Information Agency, Syria has 2.5 billion barrels of crude oil reserves; in comparison, Saudi Arabia has more than 100 times as much. It also has natural gas reserves, but there too it’s a small player.

Trump suggested he’d “do a deal” with a company like Exxon to ramp up Syria’s oil production. Yet even if Syria were to resume oil production at pre-war levels and Trump were somehow able to expropriate it all (a logistically and legally dicey proposition, to say the least)—it would only cover about a week of the United States’ oil consumption.

Would it even be a good deal? A back of the napkin calculation shows that a year’s worth of this oil would be valued at roughly $8 billion. The Pentagon’s budget request for its anti-ISIS operations in 2019 was $15.3 billion.