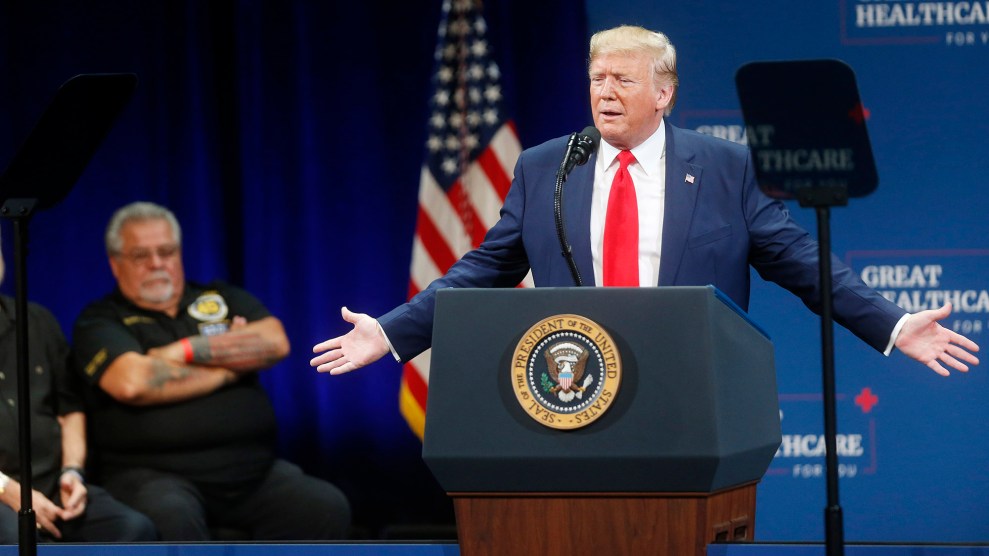 Trump addresses supporters before signing an executive order in The Villages, Florida.Octavio Jones/Zuma

In an apparent attempt to appeal to senior voters—and to divert attention away from the impeachment inquiry rocking the White House—President Donald Trump signed an executive order Thursday that changes aspects of Medicare Advantage, the private-sector health plan that covers one third of the nation’s Medicare beneficiaries. During his speech, though, the president was far more occupied with attacking Democrats’ health care proposals than with delving into the specifics of what his executive order would do. The Trump administration touted the changes to Medicare Advantage as an alternative to Medicare for All, a universal health insurance plan supported by several Democratic presidential candidates.

“We’re delivering better, fairer, and more affordable health care for all Americans,” Trump said while announcing the executive order at the Villages, a senior living community in central Florida. Shortly before the event, the White House changed its name from “Protecting Medicare from Socialist Destruction” to “Protecting and Improving Medicare for our Nation’s Seniors,” the Tampa Bay Times reported. Instead of defending Medicare against “socialist destruction,” though, the executive order simply reduces Medicare Advantage premiums and allows it to cover more a broader range of services, such as adult day care and Telehealth, The Washington Post reported.

Despite his claims to the contrary, though, Trump has taken significant steps during his presidency to weaken health care in the United States. Trump claimed on Thursday that premiums for Obamacare were too high, but he himself has contributed to a rise in premiums. He has extended the duration of so-called “junk insurance” plans, which do offer lower premiums, but at the price of subpar care that doesn’t comply with the Affordable Care Act. And he has repeatedly attempted to implement work requirements for Medicaid beneficiaries, which has left thousands of Americans in Arkansas and Kentucky uninsured. Last year, the uninsured rate increased from 7.9 percent to 8.5 percent of the population, the first time it had risen since Obamacare passed.

“We eliminated Obamacare’s horrible, horrible, very expensive and very unfair, individual mandate,” Trump said on Thursday. But by eliminating the individual mandate, Trump undermined the basis on which the Supreme Court upheld the ACA in 2012 and jeopardized the future of Obamacare. Republican state attorneys general are now arguing that without the individual mandate qualifying as a tax, the entire law is invalid. If the Supreme Court hears the case and overturns Obamacare, 19.9 million people could lose their insurance. How’s that for “better, fairer, and more affordable health care”?