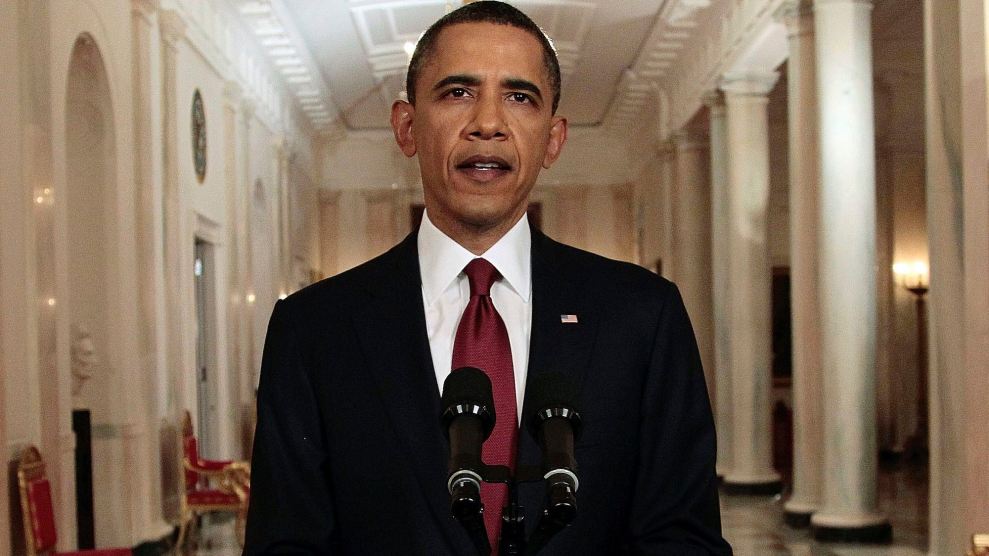 President Barack Obama reads his statement on the death of Osama bin Laden from the East Room of the White House on May 1, 2011.Pablo Martinez Monsivais/AP

As President Donald Trump announced the death of ISIS founder Abu Bakr al-Baghdadi this morning, it was impossible to avoid comparisons to President Barack Obama’s May 2011 announcement that Navy SEALs had killed Al Qaeda leader Osama bin Laden. Trump was clearly thinking about that key moment of his predecessor’s presidency as he asserted that Baghdadi had been a threat “long before I took office” and that the ISIS leader had been “the biggest one we’ve ever captured.” He also repeated the false claim that he had identified bin Laden as a threat before 9/11.

Trump’s attempts to diminish Obama’s role in taking down bin Laden aren’t new. In the years following the raid, he frequently took to Twitter to suggest that Obama was taking too much credit for getting bin Laden. The very first mention came in November 2011, in which Trump appears to sanction the waterboarding of al Qaeda leader Khalid Sheik Mohammed for the sake of gathering intelligence on bin Laden. (The Obama administration had banned this form of torture; Trump has since tried to resurrect the practice.)

Waterboarding KSM gave us the intelligence that lead to Bin Laden.

Later that year, Trump went on CNN to talk about why Obama didn’t “deserve credit for killing bin Laden.” In the spring of 2012, he reiterated that point on CNBC and in a tweet that cited an article from Breitbart.

In September 2012, a Navy SEAL who had been part of the bin Laden mission published a tell-all autobiography that contradicted some details of the Obama administration’s telling of the raid. Trump called Obama’s “story a big lie.”

Military reps have attacked @BarackObama over Bin Laden leaks–they believe he's just using this for his benefit. Not a big surprise…

Book on Bin Laden is a terrible violation of code–makes @BarackObama's story a big lie.

On the eleventh anniversary of 9/11, Trump emphasized that a Navy SEAL killed bin Laden, setting up a new round of attacks on Obama as the 2012 election neared.

On this solemn day of remembrance we can all take joy in the fact that Bin Laden's last sight was a Navy SEAL pulling the trigger.

After Republican presidential nominee Mitt Romney congratulated Obama during a debate for “taking out Osama bin Laden,” Trump railed against the president for taking credit for bin Laden’s slaying. He declared that the debate was the first time Obama used “we” instead of “I” in describing the terrorist leader’s death. (It was not.)

Obama deserves much less credit for the killing of Bin Laden. The praise goes to our brave military and intelligence officers.

Obama is an easy target on foreign policy.@MittRomney has many openings to attack, especially when Obama starts bragging about Bin Laden.

Why don't we ask the Navy SEALs who killed Bin Laden? They don't seem to be happy with Obama claiming credit. All he did is say O.K.

When the military informed Obama that they had Bin Laden, is there anyone with a brain that would not have said "Ok, go get him"?

The military and Navy Seals should be given more credit for Bin Laden's death, not Obama, who works hard to take (cont) http://t.co/Awn3F7tS

Mitt Romney must start congratulating the Navy Seals and military on Bin Laden’s killing, not the President.

Barack Obama said absolutely not 3 times before he agreed to go after Bin Laden— now he wants all of the credit!

Last night was the first time Obama said "we" instead of "I" in respect to Bin Laden's killing.

And Trump also used the bin Laden raid to take a shot at Vice President Joe Biden, tweeting that “even the SEALs who killed bin Laden” didn’t like his future political rival.

Even the SEALS who killed Bin Laden don't like @JoeBiden http://t.co/UkCnZrrJ