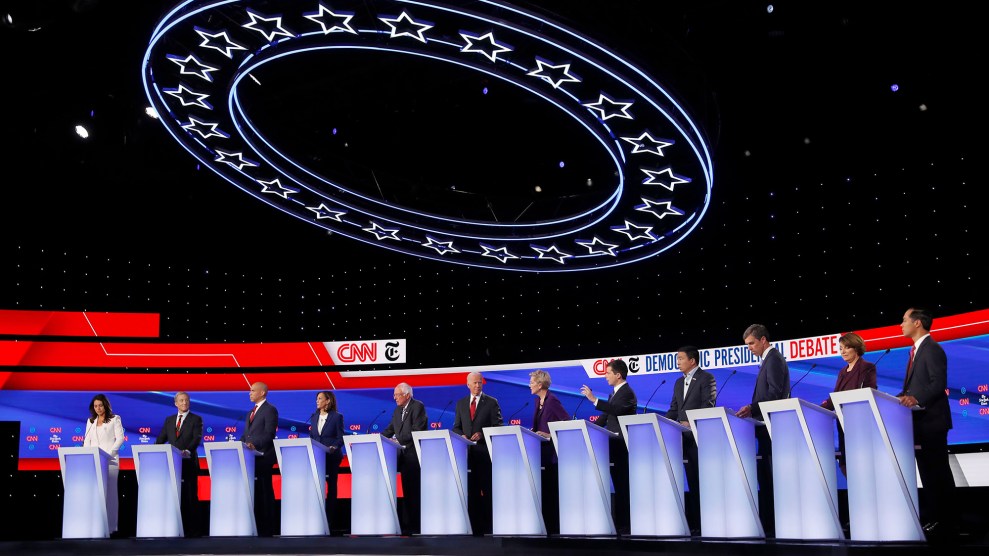 When the moderators at the Democratic debate Tuesday night finally asked about abortion, many of the candidates were ready with a simple plan. Congress, they argued, should pass legislation codifying the right to an abortion established in Roe v. Wade—a move that could take the matter out of the hands of the Supreme Court and Republican state legislatures altogether.

Amy Klobuchar, Cory Booker, Julián Castro, and Elizabeth Warren all embraced versions of the idea. Booker, Warren, and Kirsten Gillibrand, who has since exited the race, were among the first to adopt such a plan earlier this year.

Of course, the president wouldn’t be able to do this alone; the idea would almost certainly require Democratic majorities—perhaps large ones—in Congress. Earlier this year, Rep. Judy Chu (D-Calif.) introduced such a bill, but it has not advanced in the Democratic-controlled House and would almost certainly be dead-on-arrival in the Republican-majority Senate. A version of this measure was first introduced in 2013.

In arguing for legislation protecting abortion rights, the candidates made clear that the matter is inseparable from issues of economic inequality. “I lived in an America where abortion was illegal, and rich women still got abortions…What we’re talking about now is that the people who are denied access to abortion are the poor, are the young,” Warren said. “When you’ve got three out of four Americans supporting [Roe v. Wade], we should be able to get that passed through Congress. We should not leave this to the Supreme Court, we should do it through democracy because we can.”

The issue has grown more urgent over the past year, as a handful of states in the South passed bans on abortion during their spring legislative sessions, and as the president has appointed two Supreme Court justices thought to be hostile to abortion rights. Last week, the court announced it would rule on a case involving a Louisiana law that requires abortion providers to have admitting privileges at a nearby hospital; if allowed to stand, that law would shutter most of the state’s remaining abortion clinics.

Not all of the Democrats on the debate stage won plaudits from abortion rights advocates. Hawaii Rep. Tulsi Gabbard drew criticism when she expressed support for banning abortion in the third trimester—with exceptions for the health of the woman and the fetus. She repeated Hillary Clinton’s famous line that abortion should be “safe, legal, and rare”—a sentiment that many reproductive rights advocates have shied away from in light of the fact that nearly 1 in 4 American women will have had an abortion by age 45. In a survey of the candidates by BuzzFeed News in May, Gabbard did not respond a question about whether or not she supported codifying Roe.