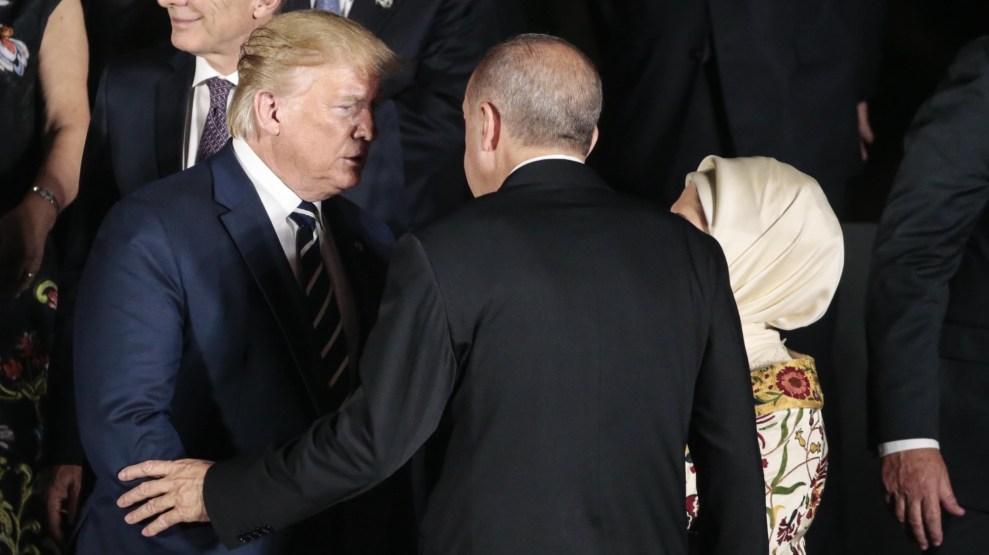 Donald Trump upended US military policy in the Middle East Sunday night, announcing through a White House statement that he would permit a “long-planned” Turkish invasion of northern Syria, a region controlled mainly by Kurds who fought alongside the United States against ISIS. The Kurdish forces are considered terrorists by Turkey, and the directive all but hands the region over to Turkey and its increasingly authoritarian leader, President Recep Tayyip Erdoğan. In return for the US allowing the offensive to go forward, Turkey will assume responsibility for detained ISIS fighters who have remained in the region.

Trump’s desire to reduce US involvement in Syria has repeatedly rattled his advisers at the Pentagon and in the intelligence community, who have long recommended that he keep a residual troop presence to ward off a resurgent ISIS. Former Trump Defense Secretary James Mattis and Brett McGurk, envoy to the counter-ISIS campaign, both resigned over Trump’s surprise decision to announce the withdrawal of roughly 2,000 troops from Syria in December, which Trump agreed to after a phone call with Erdoğan. Before making the abrupt decision to reverse support for the Kurds over the weekend, Trump spoke again with Erdoğan, providing another example of the US president trusting foreign despots over his own advisers.

“Donald Trump is not a Commander-in-Chief,” McGurk wrote on Twitter early Monday. “He makes impulsive decisions with no knowledge or deliberation. He sends military personnel into harm’s way with no backing. He blusters and then leaves our allies exposed when adversaries call his bluff or he confronts a hard phone call.”

Thanks to this latest phone call, the Kurds “could be- and many expect will be- wiped out in a campaign of ethnic violence/displacement,” Richard Engel, chief foreign correspondent for NBC News, wrote Monday morning. Even if that prediction ends up looking hyperbolic, the Pentagon’s ability to recruit trustworthy allies has already taken a hit.

A spokesperson for the Syrian Defense Forces, the Kurdish-led group allied with US troops in Syria, tweeted that “people here are owed an explanation regarding,” among other things, the “failure of US to fulfill their commitments.” Other Syrian Kurds, speaking anonymously to Engel, had much harsher words for Trump. “The Americans are traitors,” one Kurdish official told NBC. “They have abandoned us to a Turkish massacre. We can no longer fight against isis and have to defend ourselves. This could allow isis to return to the region.”

Syria Kurdish official told us, reacting to Trump’s overnight decision.
“The Americans are traitors. They have abandoned us to a Turkish massacre.
We can no longer fight against isis and have to defend ourselves. This could allow isis to return to the region.”

In a series of tweets on Monday, Trump defended his decision as a way to pull out of “these ridiculous Endless Wars” and prevent American prisons from having to take responsibility for securing thousands of ISIS fighters. “The Kurds fought with us, but were paid massive amounts of money and equipment to do so,” Trump said. At a United Nations press conference last year, he described the group in far different terms to a Kurdish journalist (who Trump dubbed “Mr. Kurd”). “Kurds are great people, great fighters, I like them a lot,” Trump said. “They fought with us, they died with us.”

The Kurdish people have long occupied a sort of pariah status in the Middle East, where they have labored since World War I to form their own independent state and have frequently clashed with the governments of Iraq, Syria, and Turkey. Their willingness to fight alongside American-backed troops made them useful allies in the 2003 invasion of Iraq and the counter-ISIS campaign in Syria. But having ignored Iraqi Kurds’ calls for independence in 2017, the United States now appears to be abandoning its frequent allies again, this time in Syria.

Last year, Turkish soldiers invaded Afrin, a majority-Kurdish city in northern Syria, as a bulwark against the growing influence of the Kurdistan Workers’ Party, which along with other Kurdish groups, has “increasingly agitated against” Erdoğan’s government, “conducting numerous attacks against Turkish authorities,” according to the Council on Foreign Relations. (Kurds compose roughly one-fifth of Turkey’s population.)

Erdoğan, who overcame a failed coup attempt in 2016 and a brutal political setback for his party in June, has become less restrained in cracking down on dissent within his own country and outside its borders. As part of his strategy to shore up his grip on power, Erdoğan has also cultivated close ties with Trump, who has been “consistently cozy” in phone conversations with him and other authoritarian rulers, like Chinese leader Xi Jinping and Russian President Vladimir Putin, the Washington Post reported.

Trump has often made rash commitments to foreign counterparts on these calls without looping in his national security team. In December, he announced the surprise withdrawal of US troops from Syria at Erdoğan’s urging and “over [the] strong objections from virtually everyone involved in the fight against the Islamic State group,” the Associated Press reported. This more recent decision to abandon the Kurds followed a nearly identical sequence of events. The New York Times noted that Trump spoke to Erdoğan on Sunday and agreed to a decision that went “against the recommendations of top officials in the Pentagon and the State Department.” A senior administration official, speaking to reporters Monday on the condition of anonymity, insisted that Trump did not blindside his advisers, as some media outlets reported, and actually “did not endorse and do[es] not endorse any Turkish military operation in Northern Syria.” Defense Secretary Mark Esper deleted a tweet hours earlier that said, “DOD does not endorse a Turkish operation in Northern Syria.”

Dana Shell Smith, the former US ambassador to Qatar, said Monday that “there were no good choices” for the United States in northern Syria, given the clash between Turkey—a NATO ally—and the Kurds, an expedient ally against ISIS. But Trump’s chaotic style of policymaking has only made things worse. “I don’t blame Trump for the fundamental contradiction in the policy adopted before his time,” she wrote on Twitter. “I do blame him for abandoning all foreign policy deliberation and process so that choices are consistently bad.” Perhaps fittingly, the decision came days after reports emerged that Trump plans to significantly reduce the size of the White House National Security Council, which advises the president on foreign policy matters. Even Turkey was apparently surprised by Trump’s quick shift.

Foreign policy has often been the only realm where Senate Republicans have bucked Trump, and Monday’s news proved to be no different. Sen. Marco Rubio (R-Fla.) said the Trump administration had made “a grave mistake” that could spiral into a “more dangerous regional war.” Sen. Lindsey Graham (R-S.C.) pledged to introduce a sanctions package with Sen. Chris Van Hollen (D-Md.) if Turkey invades Syria and said in a series of tweets that “this decision makes it difficult for the U.S. to recruit allis against radical Islam.” Even Majority Leader Mitch McConnell (R-Ky.) released a statement questioning the wisdom of Trump’s decision. Less hawkish figures on the right welcomed Trump’s decision. Dan Caldwell, senior adviser to conservative advocacy group Concerned Veterans for America, said in a statement that his group applauds “President Trump for this action and urge[s] him to follow through on his promise to completely withdraw American forces from Syria.”

Amid the backlash on Monday, Trump vowed on Twitter to punish Turkey if it does anything “off limits.” It’s difficult to read much sincerity into this threat, given that Turkey has been clamoring for months to attack the Kurds. When John Bolton, Trump’s then–national security adviser, called on Turkey in January to commit to leaving Kurdish forces alone in northern Syria as a condition of a US withdrawal, Erdoğan called it a “serious mistake” and canceled a meeting with Bolton. Turkey would offer “no concessions,” Erdoğan said, in its fight against what it deems to be terrorist Kurdish groups in Syria. As recently as last month, the Kurds agreed to destroy their own fortifications along the border with Turkey at America’s urging, ostensibly as part of a plan to create a buffer between their Syrian territory and southern Turkey. Evidently they believed they still had Trump’s protection from Erdoğan. All it took was another phone call to change that.