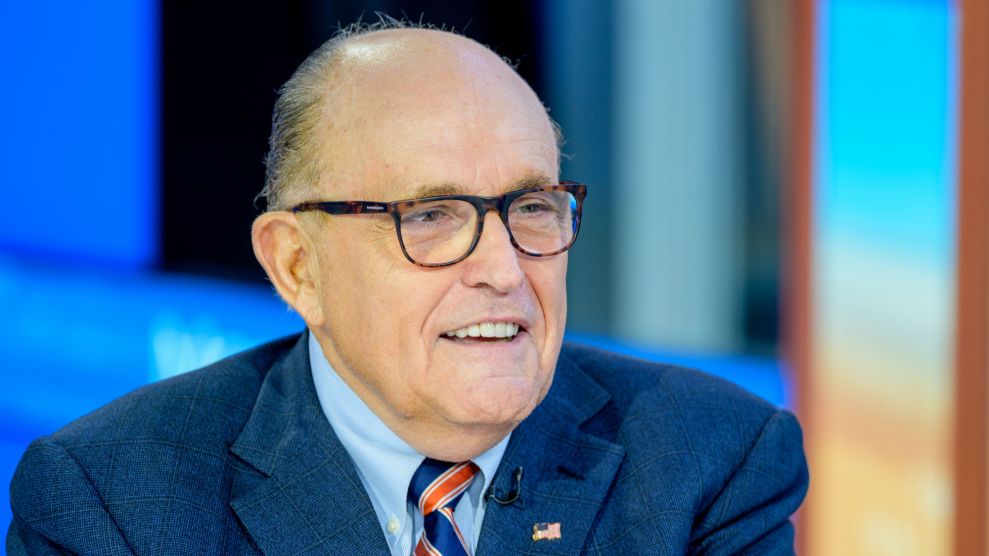 President Donald Trump and his lawyer, Rudy Giuliani, insist that their bid to pressure Ukraine to investigate Joe Biden reflected their broader concern about rampant corruption in the former Soviet republic. That is, of course, ridiculous.

Trump’s request to Ukranian president Volodymyr Zelensky for a “favor” that would help him politically smacks of corruption. As Sen Mitt Romney (R-Utah) noted Friday, asking for an investigation of an electoral rival is pretty clearly aimed at political gain, not stamping out graft. And as Trump has continued to profit as president from US government and foreign spending at his properties, his critiques of corruption in other countries ring hollow.

Then there is Giuliani, whose recent record also makes him a poor champion for rooting out corruption in other countries. As Trump’s lawyer, Giuliani has helped Trump to engage in behavior that triggered the whistleblower complaint at the center of the impeachment inquiry by the House. And while working for Trump, Giuliani has also engaged in what might be described as anti-anticorruption efforts in several countries.

In Ukraine Giuliani sided with officials and businessman accused of corruption in a bid to smear former 2020 presidential hopeful Joe Biden. As Vice President, Biden joined an international chorus of critics who advocated firing Viktor Shokin, a state prosecutor, whose failure to pursue corruption cases was considered to be, in itself, deeply corrupt. Giuliani argued, without evidence, that Biden wanted to protect his son Hunter Biden, who sat on the board of Ukrainian gas company.

Giuliani has also disparaged anti-corruption activists there since last year, arguing Ukrainians who helped to expose secret cash payments by Ukrainian politicians to Trump’s former campaign chairman Paul Manafort improperly interfered in US politics. His reasoning is that they interfered in US elections because Manafort’s exposure in August 2016 harmed Trump’s campaign.

His anti-anti-corruption portfolio extends to Romania. In August 2018, while working as Trump’s lawyer, Giuliani, seemingly out of the blue, wrote a letter to Romania’s president, Klaus Iohannis faulting the country’s National Anticorruption Directorate for alleged excesses in its prosecution. Giuliani said the anti-corruption effort had included “intimidation of judges; defense lawyers and witnesses; unconstitutional phone tapping; forced confessions; and unfair judicial processes.” Romania should give amnesty to officials convicted “through the excesses” of Romanian prosecutors, he wrote.

This missive contradicted official US policy. The State Department had encouraged the crackdown on corruption and reacted to the letter by declaring: “Rudy Giuliani does not speak for the US government on foreign policy.”

“Rudy Giuliani does not speak for the US government on foreign policy.”

What led to Giuliani”s concern about Romanian prosecutors’ alleged excesses? Giuliani says he acted at the behest of Freeh Group International Solutions. This company run by President Bill Clinton’s FBI director Louis Freeh represented at least one Romanian facing the prosecutors Giuliani attacked. Giuliani told Politico that Freeh paid him for the letter, but he refuses to  disclose the amount.

The letter was also useful to Liviu Dragnea, the leader of Romania’s ruling Social Democrats, at the time Romania’s most powerful politician who was then also fighting a June 2018 conviction abusing his office, one of an array of allegations of corruption or official misconduct against him. Dragnea capitalized on Giuliani’s proximity to Trump and pointed to letter as an expression of official American policy, declaring that it demonstrated that “trust in the Romanian justice system is seriously shaken when it comes to foreign partners.” This statement was part of an effort by Dragnea to discredit Romanian prosecutors, a campaign with notable similarities to attacks made by Trump and his allies those who attempted to investigate the president’s alleged wrongdoings. Dragnea was sentenced to three-and-a-half years in prison earlier this year.

Giuliani declined to say how much Freeh’s firm paid him for the letter or to comment substantively on it. “I’d bet on Louis Freeh anytime and he was right on this,” he wrote. Asked if he knew who Freeh’s clients in Romania were, he did not respond.