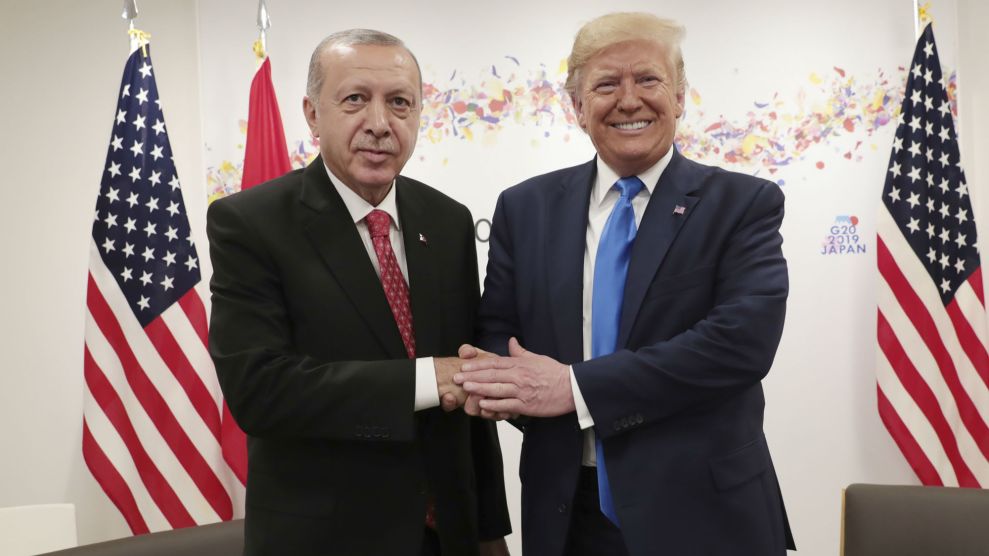 Late Sunday night, the Trump administration announced that US troops would be pulling back from their positions northern Syria, allowing Turkey to move into a region controlled by Kurdish forces that had fought with the US against ISIS. Trump’s announcement is a big win for Turkish President Recep Tayyip Erdogan, and it has already enraged many in American national security circles—including Trump allies—who say it reverses years of US policy. Kurdish leaders are being more blunt, saying it qualifies as a betrayal.

“I have a little conflict of interest ’cause I have a major, major building in Istanbul.”

Whatever else it may be, Trump’s policy toward Turkey is also a significant conflict of interest, as Trump himself has admitted. In 2015, while running for president, Trump gave an interview to Stephen Bannon, not yet his campaign manager, in which he talked about Turkey. Right away, he admitted that his business interests in the country would make it difficult for him to deal with Turkey with a clear mind.

“I have a little conflict of interest ’cause I have a major, major building in Istanbul,” Trump told Bannon during a Breitbart radio show. “It’s a tremendously successful job. It’s called Trump Towers—two towers, instead of one, not the usual one, it’s two.”

Those Trump Towers are a pair of glass buildings in Istanbul that have borne Trump’s name since 2012. Trump doesn’t own the buildings—the situation might be less complicated if he did. Instead, Trump licenses his brand to the building’s actual owner, Turkish business magnate Aydin Dogan, who has been described as the single largest payer of taxes in Turkey. He’s a one-time antagonist of Erdogan who is now in step with the strongman.

The conflict of interest and the way it could affect Trump’s position on important issues—or at least the perception of how it could affect his position—quickly became obvious after Trump made this comment. In June 2016, after Trump said he supported a ban on immigration by people from countries he said were associated with Islamic terrorism—he called them “terror countries”—Erdogan objected, and so did Dogan, and both threatened to remove Trump’s name from the buildings.

That’s no small threat—according to personal financial disclosures filed by Trump, since he launched his bid for the presidency, he has earned somewhere between $3.2 million and $17 million in royalties from the deal. (The amounts are given in ranges; the precise figures are unclear.)

Less than a month after the threat to remove his name was made, Trump very publicly voiced support for Erdogan when the Turkish leader faced a coup attempt. And his closeness with Erdogan has continued, even over the objections of some of Trump’s most reliable supporters. For instance, in May 2017, when Erdogan visited Washington, D.C., for a White House visit, Turkish agents violently attacked protesters outside the Turkish ambassador’s residence—shoving past local police officers to do so. Video showed Erdogan calmly watching the attack from his car. Although the House of Representatives, then under GOP control, voted 397-0 to condemn the attacks, Trump refused to do so. A few months later, Trump praised Erdogan, describing him as “a very good friend” and saying he gets “very high marks” for the way he runs Turkey.

What’s more, the relationship between Erdogan and Trump’s partner, Dogan, is not an even one. Although Dogan is one of Turkey’s wealthiest men, he is not nearly as powerful as Erdogan. In 2009, as part of what was described in press reports as a feud between the two men, Dogan’s company was fined $2.5 billion for tax violations. At the time, the media empire controlled by Dogan was widely seen as critical of Erdogan; the Turkish president characterized Dogan’s publications as “newspapers that print lies.” Dogan later settled the tax case, and Erdogan attended the opening of the Trump Towers in 2012.

When he ran for office, Trump said he would handle conflicts of interest like this by turning over his businesses to his children. He didn’t. Instead, he simply stepped away from the daily operations of his business empire, but he retains full ownership of almost all of the assets, including the licensing company that collects royalties from Dogan.