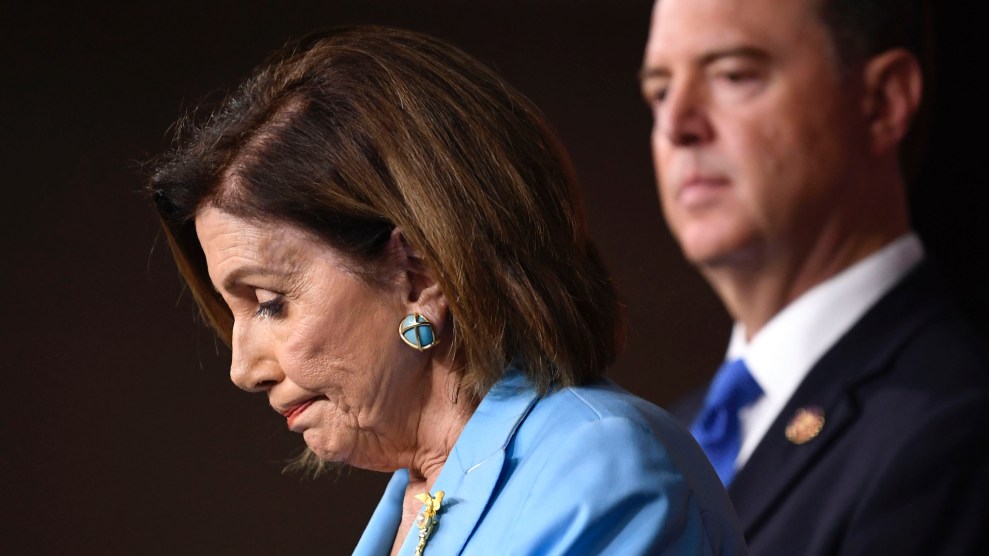 In her second press conference after announcing impeachment proceedings against President Donald Trump, House Speaker Nancy Pelosi issued a warning: Keep the scope narrow. Objections to the president’s policies on issues like guns, climate change, and immigration “have no place in this discussion,” she said. “Save that for the election. This is about the facts relating to the Constitution.”

“If we don’t impeach him on all of his high crimes, what we do is we set a precedent for whoever comes next.”

That warning has been Pelosi’s constant refrain ever since a whistleblower complaint revealed Trump’s efforts to pressure Ukrainian leaders to launch an investigation into former Vice President Joe Biden and his son, Hunter. The scandal helped unify the once-divided Democratic caucus, with all but a dozen House Dems quickly embracing the impeachment inquiry. “To uphold and defend our Constitution, Congress must determine whether the president was indeed willing to use his power and withhold security assistance funds to persuade a foreign country to assist him in an upcoming election,” wrote seven Democrats who represent swing districts, six of whom had previously been reluctant to take steps toward impeachment.

In the days that followed, Pelosi made clear that the inquiry should indeed focus narrowly on those particular allegations—allegations that be easily explained to the public. She’s directed the House committees overseeing the process to solely investigate matters under their jurisdiction that relate to Ukraine. The Sunday after her announcement, she huddled with House Democratic leadership to map out a messaging strategy that emphasized making a case around the president abusing his office when he pressured Zelensky to look into the Bidens—and nothing else.

Narrowness, however, isn’t exactly what the Democrats’ progressive base has in mind. Liberal activists, after all, have been pushing for impeachment since long before the Ukraine scandal burst into public view. After the release of the Mueller Report earlier this year, Democrats on the House Judiciary Committee announced an impeachment inquiry related to Trump’s Russia scandal. At the time, Pelosi and most Democrats had yet to publicly back the inquiry, but many progressives were already calling for it to be expanded. In a July 30 letter sent to Judiciary leadership, 13 national progressive groups—including Democracy for America and Indivisible—encouraged the committee to broaden its probe to include a host of other actions they viewed as impeachable offenses. These included Trump pressuring the Justice Department and FBI to investigate his political adversaries, such as Hillary Clinton and James Comey; welcoming foreign assistance during the 2016 election; separating children from their families at the border; using the presidency to enrich himself; and abusing his office to promote racial hostility.

Moderate Democrats, meanwhile, countered that their party’s liberal faction has been too partisan, too vocal, and too disorganized in its approach to oversight. They argued that the slow drip of Trump corruption revelations hadn’t created a credible case that Democrats should put aside the kitchen-table issues they ran on in 2018 and instead focus on impeachment.

On September 10, with the Ukraine scandal still widely unknown, the Congressional Progressive Caucus, which includes 95 of the House’s most liberal members, formally endorsed the Judiciary Committee’s ongoing impeachment investigation. A week later, Trump’s acting director of national intelligence, Joseph Maguire, refused to give Congress the Ukraine whistleblower complaint, turning the nascent controversy into a full-blown constitutional crisis. And one week after that, Pelosi threw her support behind an impeachment inquiry.

After the whistleblower’s allegations unified House Democrats around an impeachment inquiry, progressive lawmakers seemed to get in line with Pelosi’s call for a narrow focus on Ukraine. “The issue with Ukraine is the one that gets us to 218 [Democrats], right?” Rep. Rashida Tlaib (D-Mich.), a longtime impeachment supporter, told me right before Congress broke for October recess. Rep. Pramila Jayapal (D-Wash.)—a CPC co-chair and Judiciary Committee member who has long called for impeachment—told me Democrats would have to be “very strategic and careful” to not “put out a wide list of things” that might diminish the investigation’s credibility with voters.

“I was pretty skeptical that Pelosi was going to lead on this,” Ezra Levin—whose group, Indivisible, has long been on the bleeding edge of the impeachment push, told me at that time. “But she’s done just about everything we would have hoped for.”

“The movement is at a critical stage,” said Anthony Torres, the political director of grassroots group By the People. “If we don’t impeach him on all of his high crimes, what we do is we set a precedent for whoever comes next in the presidency to continue those same abuses of power.”

Last week, the Progressive Change Institute, which has worked close with By the People on impeachment efforts, conducted a survey that concluded that other polling had undercounted support for impeachment. Among the 49 percent of respondents who said they supported an impeachment inquiry, 71 percent of them said that Congress should vote on articles of impeachment that include “all alleged high crimes and misdemeanors, not just the most recent high-profile one.”

Meagan Hatcher-Mays, Indivisible’s director of democracy policy, said she’s hopeful that the articles of impeachment under consideration will include foreign interference, obstruction of Congress, obstruction of justice, and violations of the emoluments clause, which bars the president from using his office for personal enrichment. “We’d be satisfied with the greatest hits,” she says.

In the end, the course of the investigation might help moderates and progressives meet in the middle. Politico counted at least six executive agencies and offices that have now been caught up in the growing scandal. Trump, meanwhile, continues to invite his own scope creep: Last week, the president told reporters on the White House lawn that China should investigate the Biden family, as well. The Democratic Congressional Campaign Committee, House Democrats’ campaign arm, has seized onto those developments. On Monday, it put out two statements calling attention to Trump’s comments about China. A strategist who works closely with House Democrats said that while the plan remains primarily focused on Ukraine, it will be broadened as necessary as the president continues using his office to coerce foreign governments.

Legal considerations may also encourage Democratic leaders to expand their investigation, since a formal impeachment proceeding is widely believed to give lawmakers greater power to demand documents and testimony that the administration has sought to withhold. On Tuesday, during a federal court hearing on Democrats’ lawsuit to obtain the grand jury materials from Mueller’s Russia investigation, House counsel Doug Letter argued that the impeachment inquiry is not, in fact, strictly limited to Ukraine. He explained that six House committees will share the results of various investigations—which could include allegations related to the Mueller report, or even the president’s taxes—and that the Judiciary Committee will report recommended articles of impeachment to the full House. As for the emphasis on Ukraine, Letter said, “right now the media is focused on that.”