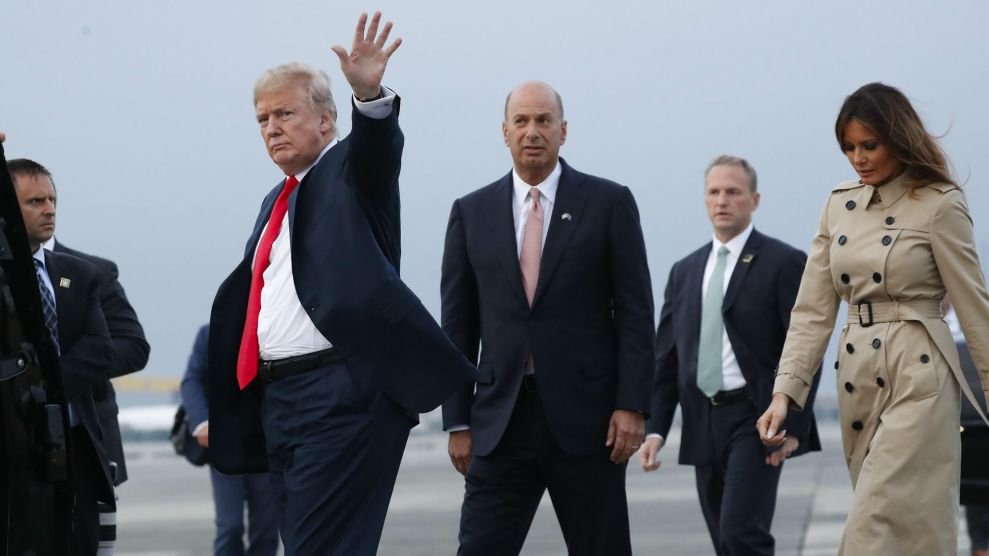 As the extent of President Donald Trump’s campaign to pressure Ukraine into helping him undermine a political opponent becomes clear, the role played by Gordon Sondland, America’s ambassador to the European Union, is coming into focus. Included in text messages turned over to House investigators on Thursday are exchanges between Sondland and fellow American diplomats suggesting Sondland knew there was a quid pro quo being proposed—and that he wasn’t comfortable with it. The Washington Post reported Saturday that Sondland will be testifying on Tuesday as part of the impeachment inquiry in the House.

Initially, when another diplomat said to him over text that “it’s crazy to withhold security assistance for help with a political campaign,” Sondland responded by denying a quid pro quo, but then added that the conversation should not continue over text. On Friday, Republican Sen. Ron Johnson (Wisc.) told the Wall Street Journal that Sondland had told him in late August that the Trump administration’s offer of aid to Ukraine was tied to the country’s willingness to try and dig up dirt on Democratic candidate Joe Biden’s son, Hunter Biden, who had previously worked for a Ukrainian company. Johnson told the Journal that he brought the issue up with Trump, who denied a quid pro quo. Sondland also travelled to Ukraine and met with the Ukrainian president Volodymyr Zelensky on July 25, the same day Trump had his now infamous call with the Ukrainian leader.

How did Sondland, who is not a career diplomat but was appointed to his post in 2018 by President Trump, wind up in the middle of this delicate situation? Not by spending years developing expertise in the region. Instead, Sondland’s experience is something much closer to Trump’s—developing hotels.

Prior to his appointment as a top Trump ambassador, Sondland, a 62-year-old native of Seattle, spent decades operating, and then owning and building high-end luxury hotels in the Pacific Northwest, mostly around Portland, Oregon, but as far as New Orleans. Unlike the president gold-plated excess, Sondland’s hotels are not branded with his name, but instead with a particularly cosmopolitan, quiet, and trendy style. Sondland appeared in industry publications as a hospitality industry executive in the early 1980s, but his big break was in 1998, when he and a partner purchased four older hotels in Seattle, Portland and Denver, and redeveloped them. Where Trump likes to slap his name on flashy new towers in exotic locations around the globe, Sondland has specialized in rebuilding classic American hotels.

Along the way, he developed a reputation as a prominent local businessman who dabbled in moderate Republican politics, occasionally partnering with Democrats and attempting to convince Hollywood producers to film in Oregon. According to his personal financial disclosure filed when he was nominated for his ambassadorial position, he served on the boards of several charitable organizations and Duke University’s business school advisory board. His net worth is listed as well north of $60 million, and he disclosed owning a Lear jet. In a video introducing himself to his new co-workers at the State Department, Sondland explained that he flies planes as a hobby, as he is shown climbing into the cockpit of a jet.

Real estate, luxury hotels, and planes would seem to make him a perfect match for the president, but he also was known for more refined taste—he has a large art collection, for instance, which he values as being worth as much as $25 million.

His role now is as the ambassador to the European Union, based in Brussels and tasked with representing America when it comes to Europe’s broader issues. His predecessor, Obama-appointee Anthony Gardner, came to the job from the world of private equity, but he had a degree in international relations from Harvard, speaks French, Spanish and Italian and had previously served in diplomatic roles. Sondland, however, got his diplomatic job the old fashioned way—by making large political donations. According to OpenSecrets.org,  Sondland has given at least $446,000 to federal candidates in the last few decades. Almost all the recipients were Republicans, but of the more moderate type—Jeb Bush’s Right to Rise PAC, for instance.

As the 2016 election ramped up and Jeb Bush was eclipsed by Trump, Sondland quickly aligned himself with nominee. The relationship hit a hiccup, however, when Trump denigrated Gold Star mothers at the Republican convention in 2016, Sondland and his business partner very publicly insisted that their names be taken off the invitations as hosts of a Trump fundraiser.

Sondland is not listed as a donor to Trump’s campaign—though he did donate the maximum amount to the Republican National Committee before Trump was nominated. Nonetheless, the hotelier and Trump must have patched things up, because Sondland appears on a list of the 2016 Trump campaign’s bundlers—a fundraiser who taps a network of other deep-pocketed donors to support a candidate. And, perhaps most importantly, OpenSecrets reported, Sondland wound up donating $1 million to Trump’s inaugural committee.

More details of how much Sondland knew, and perhaps why he was so concerned about there being a text record of the conversation, may emerge next week, during his deposition before the House impeachment inquiry.