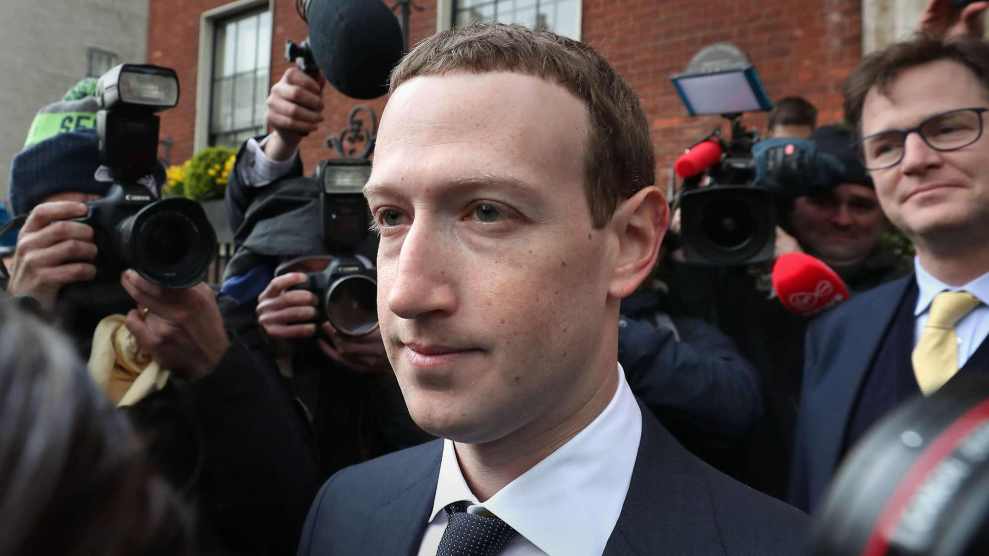 During a major address at Georgetown University on Thursday, Mark Zuckerberg kept hammering the same point: connecting people (on Facebook) and elevating their voices is good for society. Compromising on this (on Facebook), he argued, would stifle their free speech, which would be bad for society.

“Our mutual commitment to each other—that we hold each others’ right to express our views and be heard above our own desire to always get the outcomes we want—is how we make progress together,” he said.

The Facebook CEO made almost no effort to show how, in its 15 years of existence, Facebook actually helps.

“In the face of these tensions…a popular impulse is to pull back from free expression. We’re at another crossroads,” Zuckerberg read at another point, stressing that “the bigger story has always been regular people using their voice to take billions of individual steps forward to make our lives and our communities better. I believe in giving people a voice because, at the end of the day, I believe in people.”

Not only did this approach ignore the fact that, at least domestically, free speech is not imperiled, but it also skipped over something vital: how, or whether, Facebook can fulfill his vision that elevating free speech and giving people a voice makes anything better. While favoring abstract and theoretical—and not necessarily untrue—arguments about how connecting people and free speech can be good, the Facebook CEO made almost no effort to show how, in its 15 years of existence, Facebook actually helps serve those ends.

Maybe Zuckerberg and company think that Facebook’s contributions to these things are self-evident, but they aren’t. What is far more evident is how Facebook has undermined the well being of large swaths of the world by giving platforms to people who want to weaponize speech.

Free speech and more social cohesion, handled in a sustainable, responsible way, are unequivocally good, but Zuckerberg and Facebook no longer have the public confidence to warrant uncritical trust that they’ll handle these issues sustainably and responsibly. Over the last several years, United Nations investigators have said that Facebook helped exacerbate genocide in Myanmar, played a role in radicalizing people to dangerous ideologies, gave Russian trolls a tool to influence the 2016 presidential election and, more generally, created a forum for the rapid dissemination of misinformation.

None of that even very limited selection of the company’s missteps came up in the speech, though Zuckerberg did briefly deviate from talking vaguely about theory to sprinkle in examples of the historic value of free speech—citing points of history that Facebook never existed in and wouldn’t be relevant to.

“In times of social tension, our impulse is often to pull back from free expression because we want the progress that comes in from free expression, but we don’t want this tension,” Zuckerberg said citing examples of how Martin Luther King Jr. was constitutionally jailed for peacefully protesting, efforts to stymy student protests of the Vietnam War, and the Supreme Court’s ruling that Eugene Debs could be imprisoned for criticizing World War I.

“In the end all of these decisions were wrong,” he solemnly told the crowd. In each of these examples that Zuckerberg plucked from high school American history lessons, the conflict is between dissidents and oppressive state power. Facebook is neither, and at this point arguably resembles the latter far more than the former.

The problems Facebook has helped cause happened because of how it was designed to make money.

With even its own CEO stumbling to marshal evidence for his case, it’s hard to see how Facebook’s connect-people-at-all-costs mission will bend the arc of history towards justice like Zuckerberg says it will, especially given how the platform has recently helped elevate so many bad things.

Zuckerberg did make a brief, passing effort to nod to ways that Facebook has benefited America, mentioning his platform’s role in the Black Lives Matter and #MeToo movements. But neither example stands up to scrutiny.

His particular claim—that the first mention of Black Lives Matter was on Facebook—is true, but so is the fact the white supremacist 2017 Unite The Right Rally in Charlottesville was also organized on Facebook, with the company only taking down the event page one day before the event. And Black Lives Matter probably didn’t need Facebook to thrive; the company just happened to have the dominant social media platform at the time when a community organizer first used the phrase in 2013. And yes, while #MeToo did go viral on Facebook, it first did so on Twitter and started even earlier on MySpace. It’s unlikely that Zuckerberg’s social media platform was necessary for the movement, which was charged by the work of investigative journalists.

The problems Facebook has helped cause—facilitating the spread of misinformation, exacerbating genocide, contributing to radicalization, giving massive platforms to the most incendiary and least substantive content producers—happened specifically because of how Facebook was designed to make the company’s executives, owners, and shareholders money. That’s a very real benefit accruing to a very small group.

Perhaps there are other, revolutionary benefits to Facebook. The company certainly has a vast and vast and transformative reach. If Zuckerberg wants people to believe that that’s helping society though, he should probably figure out how.