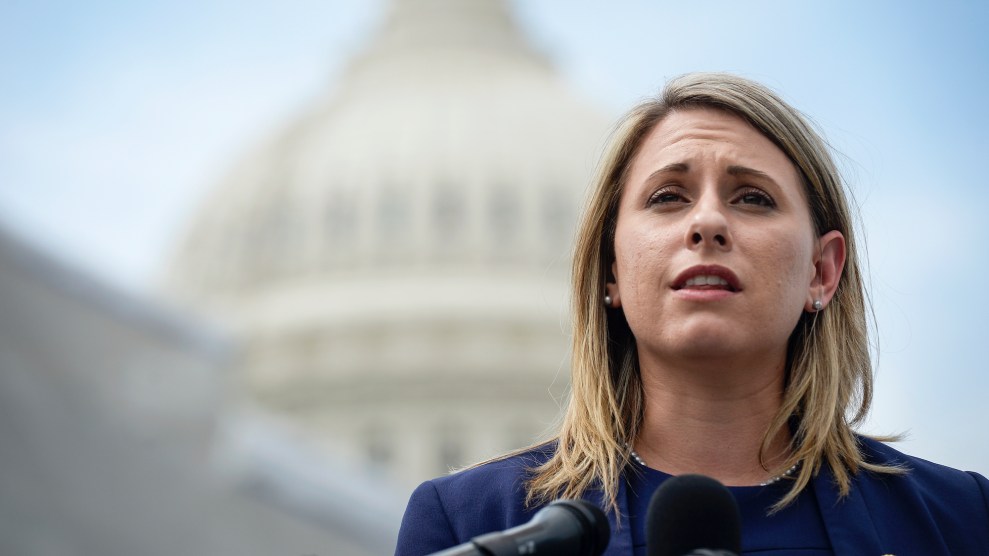 Rep. Katie Hill (D-Calif.) speaks at a press conference outside of the Capitol on Tuesday, June 25, 2019.Caroline Brehman/CQ Roll Call via AP

Since Rep. Katie Hill (D-Calif.) announced she was leaving Congress on Sunday night, Democratic lawmakers and their staffers on Capitol Hill are grappling with the complicated circumstances of that resignation: Allegations of an affair with a member of her congressional staff, precipitated by the nonconsensual publication of nude photographs. As the female House Democratic aide who cursed the situation told me, “Potential ethics violations are a problem, but what happened to her isn’t right.”

Facing a House ethics investigation, Hill resigned just more than a week after right-wing blog RedState and British tabloid the Daily Mail shared nude photographs of her and after she admitted to a consensual but “inappropriate” relationship with a campaign staffer, but denied allegations of a relationship with a congressional aide. In her resignation letter, the 32-year-old freshman lawmaker blamed the distribution of the photos on her “abusive husband” and “hateful political operatives” enabling “a smear campaign built around cyber exploitation.”

“Potential ethics violations are a problem, but what happened to her isn’t right.”

Now, with the ouster of one of their own, women on Capitol Hill are attempting to figure out how to deal with someone they may believe showed poor judgment, but who didn’t deserve her fate.

The three House staffers I spoke with—who all wished to remain anonymous to speak frankly about the sensitive issues at stake—agree that while people are quick to defend Hill against the release of the photographs, they’re not willing to weigh in on Hill’s conduct beyond that. These staffers weren’t either. “No one wants to veer into the territory of condoning a potential ethics violation,” the first House aide told me. “The [House ethics] rules exist because a subordinate, in being a subordinate, can’t give consent.”

Indeed, last year Congress updated its code of conduct to hold lawmakers accountable for workplace misconduct, a change that followed a wave of #MeToo resignations across both parties in the House and Senate. “We changed our House rules to reflect how seriously we take a workplace that is safe and respectful for every worker,” Clark told me.

“I would certainly hope those rules would be applied equally,” she added.

“Their lives have been weaponized in a way that’s not seen by other House members.”

But some of the women I spoke with were frustrated that there is a stark double standard at play. Rep. Duncan Hunter (R-Calif.) faces several House ethics violations for multiple alleged affairs with his House staff and the use of campaign funds to cover it up. First-year Democratic delegate Michael F. Q. San Nicolas of Guam, also faces an ethics investigation into an alleged affair with a House staffer, but remains in office. And then, of course, there’s President Donald Trump—while not in Congress of course, he’s a man who has been accused of sexual assault by at least two dozen women.

“It’s really sad to see the kind of double standards that are deployed,” Rep. Ilhan Omar (D-Minn.) told me. “It’s quite shameful that Duncan Hunter is still a member of Congress and Katie will not be. It is a shame that we have Donald Trump as still our president while Katie will not be serving us in Congress. And it is a shame, truly, that we have members of Congress and people in leadership who don’t rise to the level of integrity that she has shown.”

Omar herself has been the target of frequent racist and sexist attacks since she joined Congress, and a second congressional aide makes the point that what happened with Omar, as well as Rep. Alexandria Ocasio-Cortez (D-NY), and now Hill, fits into a growing pattern. “There’s something recurring here: These members, especially young women, have attracted an unusual amount of scrutiny from the right,” she said. “Their lives have been weaponized in a way that’s not seen by other House members.”

Still, the staffers I spoke with said that however painful, the investigation into Hill was what was required for Democrats to declare themselves the party of morals and ethics—a conversation the third House aide says reminds her of the ongoing debate over the resignation of former Sen. Al Franken (D-Minn.).

“We have to be better than Republicans,” the third aide told me. “That means we must condemn this illegal invasion of her privacy. But we also have to condemn the possible ethics violation.”

For her part, Omar told me she’s proud of how Hill has conducted herself in the face of the scrutiny. “I hope that the message that women and young girls around the country are getting is…she’s going to do everything in her power,” Omar says, “to make sure that women have more abilities to not fall prey to the kind of predators that exist out there, that exist your most vulnerable times in life.”