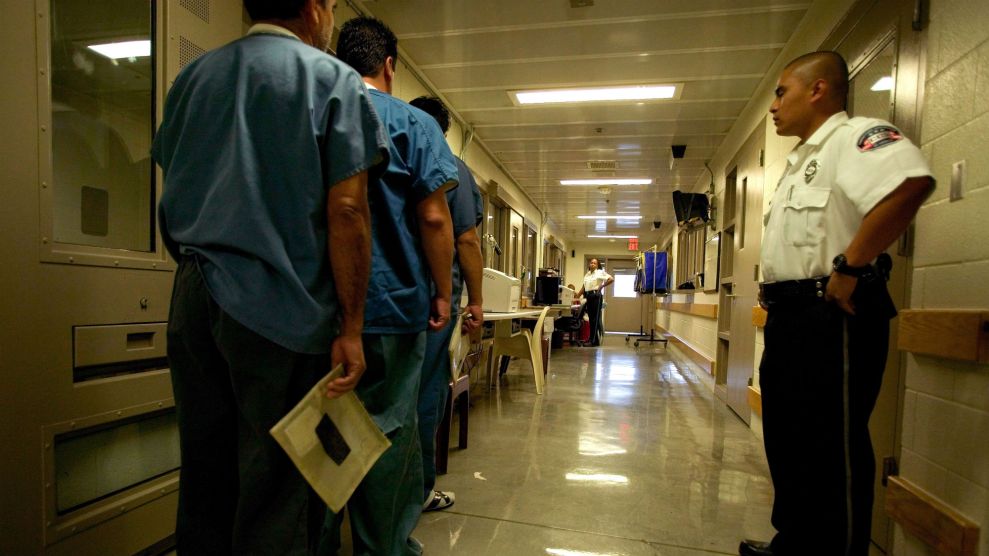 Five days after California Gov. Gavin Newsom signed a strict ban on for-profit prisons and immigrant detention centers, Immigration and Customs Enforcement quietly posted a solicitation notice for three new detention facilities in California—a move that advocates are calling a discreet attempt to open up new privately run facilities before the law goes into effect at the start of next year.

ICE is asking for “turnkey ready” facilities near San Francisco, San Diego, and Los Angeles for “the exclusive use of ICE and the ICE detainee population,” according to documents posted on the Federal Business Opportunities (FBO) website on October 16. (When ICE seeks a new contract, the search has to go through a public bidding process.) The facilities would be used to “provide housing, medical care, transportation, guard services, meals, and the day to day needs for ICE detainees,” the documents say. As the Palm Springs Desert Sun first reported, ICE is looking to house up to 6,750 detainees in the facilities.

In the notice, ICE clarifies that it will not accept proposals for constructing new facilities. The notice also includes specific requirements, like being a set distance from ICE field offices and having a certain number of beds. And since California passed a law last year banning any city or county from entering into contracts with ICE or for-profit prison companies to detain immigrants, the only existing facilities that would comply with ICE’s requirements for this contract would be the ones already owned by private prison companies, according to Silky Shah, executive director for Detention Watch Network. “In the amount of time they have for the solicitation,” she said, “it’s going to be tough for a new contractor to offer their services.”

The only existing facilities that’d comply with ICE’s requirements would be the ones already owned by private prison companies, according to Silky Shah of Detention Watch Network.

The FBO notice has a response date of October 31, giving interested companies about two weeks to respond. Hamid Yazdan Panah, an immigration attorney with the California Collaborative for Immigrant Justice, says the timeline shows ICE is trying to secure a new contract before the law goes into effect on January 1. “This is an indication that ICE and private prison companies are working together to respond to California’s ban,” he said.

As written, the ban does not allow the California Department of Corrections to enter into any new contracts or renew any existing contracts with for-profit prison companies. But it says nothing about contracts that will already be in place when the ban is implemented.

State legislator Rob Bonta, a Bay Area Democrat who wrote the original bill, said ICE is trying to exploit that loophole. “Everything about this is gaming the system,” he said. If ICE rushes to sign a contract before January 1, Bonta noted, the new facility would operate for at least five years. And even though the new law explicitly prevents any contract renewals, the FBO notice states that the contracts have two five-year extension options.

“Everything about this is gaming the system.”

Bonta said he anticipated that ICE would try to get around the law, especially since they can no longer sign contracts with any local governments in California. ICE was able to get past that legislation by signing temporary contracts directly with GEO Group and CoreCivic, without municipalities as intermediaries.

In a statement, ICE officials said they were reviewing the bill but that once the law goes into effect, “the impact would be felt by residents of California who would be force to travel greater distances to visit friends and family in custody, and not by ICE.” They did not comment on the solicitation notice.

Currently, ICE has four contracts with private prison companies to run immigrant detention centers with the ability to detain up to 4,694 people. Those detention facilities could close in the next year when their contracts expire. ICE’s contract with GEO Group, the largest private prison company in the state, for the Adelanto and Mesa Verde facilities will expire in March 2020. (In October 2018, the DHS Office of Inspector General conducted a surprise inspection of the Adelanto facility and found “serious” violations of ICE’s own detention standards, and “significant threats to the safety, rights, and health of detainees.”) The contract with CoreCivic for the Otay Mesa Detention Center is also set to expire in June 2020. The Imperial Regional facility in Calexico is under a temporary contract between ICE and MTC, which will end in September 2020.

“These twisted somersaults to push and bend federal protocols are a sign of desperation.”

The ban also comes after a string of detention facility closures in the state. In March, the Orange County Sheriff’s Office announced it would no longer work with ICE to house detainees in its local jails, the James A. Musick and Theo Lacy facilities. (A DHS report in 2017 detailed accounts of detainees being forced to eat spoiled food at Theo Lacey.) Contra Costa and Sacramento counties also ended contracts with the federal agency in 2018.

Bonta sees these latest attempts as a last-ditch effort by ICE to keep working with the private prison companies in the state. “These twisted somersaults to push and bend federal protocols are a sign of desperation,” he said. “It’s what you’d expect from a dying industry.”