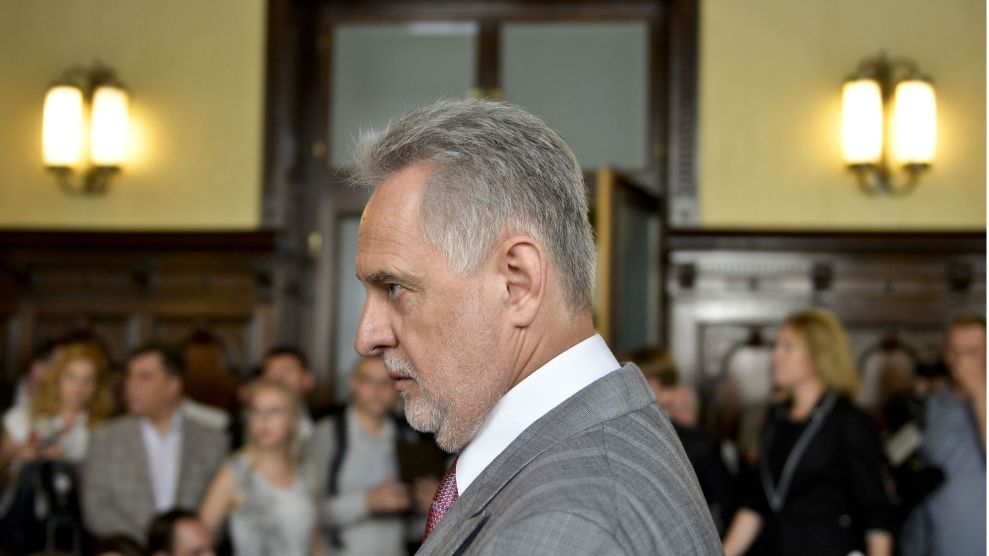 Dmytro Firtash at a public hearing at the supreme court in Vienna on June 25, 2019Herbert Neubauer/Getty

On September 29, Rudy Giuliani appeared on ABC News, waving a fistful of papers. The document in his hand was an affidavit from Viktor Shokin, a former top Ukrainian prosecutor who was fired in 2016 under international pressure due to his failure to combat corruption. Giuliani asserted that the affidavit supported his debunked claim that former Vice President Joe Biden had forced Shokin’s ouster to prevent Shokin from investigating a company tied to Biden’s son. But it did no such thing; the statement merely repeated an unproven allegation without backing it up. The affidavit, though, was evidence that President Donald Trump’s effort to smear his political rival has overlapped with the interests of Dmytro Firtash—a Kremlin-connected oligarch with purported ties to Russian organized crime.

Trump’s effort to smear Biden has overlapped with the interests of Dmytro Firtash—a Kremlin-connected oligarch with purported ties to Russian organized crime.

What Giuliani neglected to mention on ABC that day was that this affidavit was filed in an Austrian court by lawyers for Firtash, a Ukrainian tycoon who has for years been fighting extradition to the United States, where he faces federal bribery charges. In this document, Shokin also claimed that in late 2015 Biden took steps to prevent Firtash from returning to Ukraine from Austria. This claim—for which no evidence was presented—appeared intended to support Firtash’s argument that he has been the target of a politically motivated prosecution by the US Justice Department. In other words, Shokin’s affidavit, notarized on September 4, 2019, served the interests of both Firtash and Giuliani’s client, Trump.

The affidavit filed to help Firtash—and Giuliani’s use of it to try to help Trump—is just one of several indications that the Trump-Giuliani crusade to squeeze political dirt out of Ukraine has intersected with the world of an oligarch on the run from US justice.

Firtash has hired lawyers with close ties to Trump’s defense team, and he has retained Mark Corallo, who worked as a spokesman for Trump’s attorneys during special counsel Robert Mueller’s Russia investigation. But much of the cross-over involves Lev Parnas and Igor Fruman, who last week were arrested on campaign finance charges, including the allegation that they made secret donations to influence US policy on behalf of one or more Ukrainian government officials.

Parnas and Fruman were business associates of Giuliani. In addition, Giuliani has said that beginning in late 2018, these two men helped him pursue information in Ukraine that could benefit Trump. They connected Giuliani with former Ukrainian officials who alleged Biden had helped force out Shokin to stop him from investigating Burisma, the gas company connected to Biden’s son. Giuliani admitted this week that he was paid $500,000 by a company controlled by Parnas for what Giuliani claims was business and legal advice in 2018 and 2019.

At the same time Parnas and Fruman were collaborating with Giuliani, Firtash also was reportedly paying Parnas and Fruman. The duo gave the impression they were working with the oligarch when they attempted last year to force the replacement of the head of Ukraine’s national gas company and when they helped to cause the removal of US Ambassador to Ukraine Marie Yovanovitch, according to people familiar with their efforts. In a text exchange with Mother Jones last week, Giuliani said, “I have nothing to do with Firtash.”

Firtash is a controversial figure in Ukraine. He made a fortune—which Forbes in 2014 estimated at $500 million—by working with Russia’s Gazprom. The state-run natural gas giant gave Firtash a role as its partner in a business shipping gas from Russia to Ukraine. In 2010, Firtash was a key backer of former Ukrainian President Viktor Yanukovych, a pro-Russian leader accused of massive corruption. (Paul Manafort, Trump’s former campaign chair now serving a seven-and-a-half-year sentence in prison, was a top consultant for Yanukovych.)

In 2014, shortly after Yanukovych fled Ukraine during the Maidan revolution, US prosecutors in Chicago indicted Firtash for allegedly bribing Indian government officials to secure a contract to sell titanium to Boeing. He once told the US ambassador in Kiev that years earlier he had to obtain the approval of Semion Mogilevich, an alleged Russian mobster, for his initial business endeavors. The Justice Department in 2017 called Firtash an “upper-echelon [associate] of Russian organized crime,” an allegation he denies. In June, a US federal judge cleared the way for Firtash to face charges in Chicago. But he is fighting extradition from Austria, where he has been been under house arrest since 2014, arguing in court there that he was targeted for prosecution by US officials for political reasons.

This summer, Firtash hired Joe diGenova and Victoria Toensing, a husband-and-wife legal team known for championing Republican causes and defending Trump on Fox News. A year earlier, diGenova and Toensing had agreed to join Trump’s defense team, but that arrangement was scuttled due to conflicts of interest caused by the couple’s prior work for other clients involved in the Trump-Russia scandal. Toensing has also worked with Giuliani to find dirt on the Bidens in Ukraine. She planned to join the former New York City mayor on a trip to Kiev in May, during which they hoped to gather more negative information about Trump’s Democratic rival. They canceled the trip after the New York Times reported those plans.

Shortly after Firtash hired diGenova and Toensing, his legal team fired a shot that jointly targeted a Trump enemy and a Firtash foe. They submitted a brief to an Austrian court arguing that an effort by Mueller deputy Andrew Weissmann to convince Firtash to cooperate with the Russia probe demonstrated that the Justice Department’s case against Firtash was politically motivated.

Firtash’s interests intersect with the Trump-Ukraine scandal in other ways, as well. Reuters reported last week that since at least early 2018, Firtash has employed Parnas and Fruman. A source familiar with the two men’s actions told Mother Jones that, earlier this year, they “told people that Firtash was paying them.” Toensing has called claims that Firtash was in business with Parnas and Fruman “a crock,” though she says she hired Parnas this summer to work on Firtash’s defense team as an interpreter.

As Parnas and Fruman helped Giuliani do opposition research for Trump, they were also pursuing a lucrative natural gas deal involving Naftogaz, Ukraine’s state-run oil and gas company. At an energy conference in Houston in March, Parnas and Fruman—accompanied by Harry Sargeant III, a billionaire oil magnate who lives in Florida—met with Andrew Favorov, a top deputy to Naftogaz CEO Andriy Kobolyev. As the AP first reported, Parnas and Fruman pressed Favorov to agree to a plan in which they would help him replace Kobolyev as Naftogaz’s chief. Parnas and Fruman hoped to then partner with Favorov on a scheme to export up to 100 tankers per year of US liquified gas to Naftogaz, which is eager to reduce its reliance on Russian gas. Favorov reportedly rejected this proposal, which he perceived as “a shakedown,” the AP story said.

During this meeting, Parnas and Fruman gave the impression that they were working with Firtash, according to Dale Perry, an American gas executive who does business in Ukraine. Perry tells Mother Jones that Parnas and Fruman informed Favorov that they wanted Naftogaz to pay Firtash $200 million he claims the company owes him. Perry, who did not attend the meeting but spoke to Favorov shortly after it occurred, says he memorialized Favorov’s account in a document he sent to State Department officials.

According to Perry, Parnas also told Favorov that Yovanovitch, the US ambassador to Ukraine, would be fired within months. Yovanovitch was a vocal supporter of Kobolyev due to his reputation for opposing corruption; her removal could have cleared a significant road block in the campaign to oust Kobolyev. Yovanovitch had also backed Kobolyev in a dispute pitting Naftogaz against Firtash, in which Kobolyev claimed Firtash’s firms had illegally pocketed up to $2 billion since 2017 by stiffing the state-owned company on payments.

Parnas and Fruman “couldn’t get rid of Kobolyev because of the strong support that he enjoyed from the ambassador,” explains Perry. “So they [thought], We need to get the ambassador removed.”

Around that time, Parnas and Fruman were peddling unsubstantiated claims that Yovanovitch had privately denigrated Trump. Giuliani pushed other allegations about Yovanovitch to Secretary of State Mike Pompeo. These attacks helped cause Trump to force Yovanovitch’s early removal from her post in May.

Parnas and Fruman were arrested at Dulles Airport in Virginia on October 9. Both had one-way tickets to Vienna. Giuliani, meanwhile, revealed to reporters that he had intended to travel to Vienna the next day, sparking speculation that the travel plans of all three men were somehow related to Firtash. Giuliani told NBC News he “wasn’t planning to go see” Firtash in Vienna. John Dowd, a former lawyer for Trump who now represents Parnas and Fruman, did not respond to requests for comment.

The overlap between Parnas and Fruman’s business activities, their dirt-digging with Giuliani, and their interactions with Firtash raises questions about the true scope of the Trump-Ukraine scandal—a story that has grown far beyond the initial controversy over a phone call between Trump and the Ukrainian president. Is it possible that Firtash’s case, Parnas and Fruman’s plotting, and Giuliani’s freelancing in Ukraine are intertwined? Asked by phone whether Firtash hoped to win favor with Trump and his Justice Department by helping to undermine the president’s critics, Toensing declined to comment on the record and abruptly hung up.