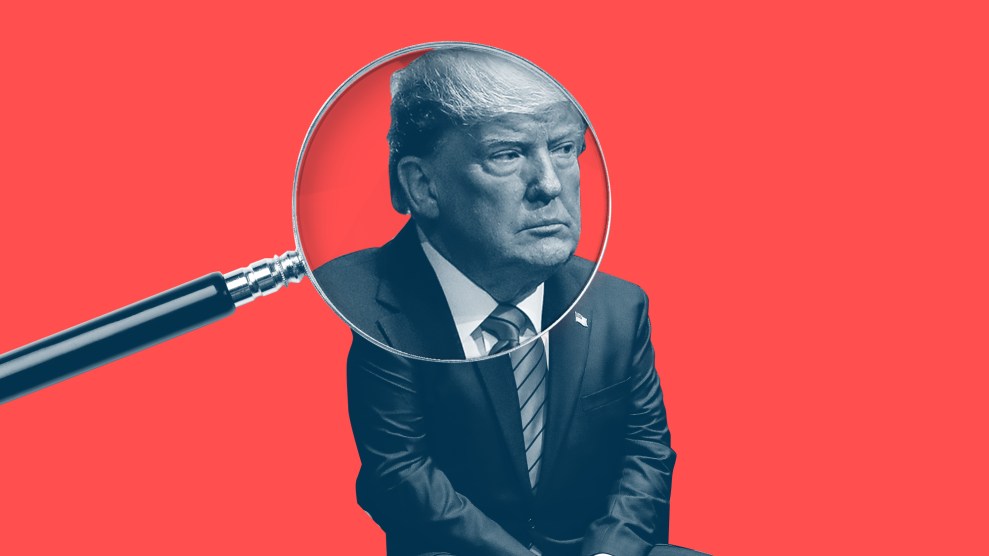 This is the way things work now: Donald Trump is credibly reported to have given aid and comfort to an enemy that attacked the United States—and this allegation, several days later, is not part of the news cycle or the scandal that is fueling the impeachment drive on Capitol Hill. The story of the most profound betrayal a president can commit has vanished from the national discourse. And that is partly because of the Democrats.

Last Friday night, the Washington Post published a stunning article reporting that during an Oval Office meeting in May 2017, Trump told Russian Foreign Minister Sergey Lavrov and then–Russian ambassador Sergey Kislyak that Trump was unconcerned about Moscow’s attack on the 2016 presidential election. Trump noted that the assault on the United States was no big deal because the United States did the same in other countries, according to three former officials. It was at this meeting that Trump, as had been previously reported, revealed highly classified information to his Russian visitors and said that his firing of FBI chief James Comey the previous day had relieved “great pressure” on him. Yet Trump’s comments dismissing the importance of the Russian attack—which, according to the US intelligence community, was mounted in part to help Trump win the White House—now stands as the most significant moment of that gathering, where Trump and the two Russians were photographed smiling.

The Post noted that after this discussion, White House officials took steps to keep Trump’s comments from becoming public, and limited distribution of a memo summarizing the conversation to only a few officials with the highest security clearances. The memo was kept from officials who normally would have access to this sort of report. (The newspaper also reported it was unclear whether the memo was hidden in the supersecret White House server, as were documents related to those Trump interactions with Ukraine that are now the subject of the impeachment inquiry.)

It has long been assumed that Trump’s meeting with Lavrov and Kislyak was in keeping with Trump’s stated desire to get past the 2016 election and Russia’s interference. But Trump telling the Russians he did not care about the attack goes much further. That would mark a dereliction of his primary duty as president: to protect the nation. The US intelligence community, the report of special counsel Robert Mueller, and two congressional investigations (led by Republicans) have each declared that Moscow covertly waged extensive information warfare against the United States to subvert American democracy. Yet here was Trump sending a message to the foreign adversary that staged this attack that he was indifferent about it—that Russia could get away with it and perhaps do so again. Certainly, Moscow could have read Trump’s I-don’t-care comment as an invitation for future underhanded intervention.

Numerous national security officials in Trump’s own administration, including current FBI chief Chris Wray and former Director of National Intelligence Dan Coats, have said Russia poses a serious threat to the 2020 elections. On Wednesday, when asked if Moscow would target the coming US election, Russian leader Vladimir Putin joked, “I’ll tell you a secret: Yes, we’ll definitely do it.” And he added in a stage whisper, “Just don’t tell anyone.” But Trump, who has denied or discounted the Russian attack ever since the campaign, has never echoed concerns about a Russian assault in 2020, and he has not signaled that thwarting another Moscow attack (or an attack on US elections from any other source) is a priority for him.

At that Oval Office meeting with the Russians, Trump was abandoning his primary responsibility as commander in chief. The shirking of a president’s most basic obligation—an easy-to-understand and easy-to-depict act of nonfeasance and malfeasance—could be expected to dominate the news for a few days and appear front and center in an impeachment inquiry. But it hasn’t.

In moments like these, news coverage is often shaped and determined by the actions and reactions of political players. Scandalous revelations tend to be driven forward in the media by the responses they engender. If an influential actor screams about a matter, the issue will probably receive more coverage. In the case of Trump’s nothing-to-worry-about comment to the Russians, the Democrats did not make a fuss, and the story has fizzled.

The morning after the Washington Post broke this news, I ran into a prominent House Democrat. Won’t this disclosure of serious presidential negligence become a key part of the impeachment process? I asked her. Aren’t the Democrats going to jump on this with good cause?

No, she said, explaining that the House Democratic leadership believed it was best to keep the impeachment inquiry targeted on the Trump-Ukraine scandal and concentrate on Trump’s request to the Ukrainian president that he provide Trump dirt that could be used to discredit the Mueller probe and attack Joe Biden in seeming exchange for US missiles. This Democrat agreed with that approach: “We need to keep this narrow. It will be easier for the public to follow.” But how much easier is it to comprehend Trump’s supposed shakedown than his Oval Office treachery?

In the days that followed, the House Democrats indeed did little in response to the Post‘s story. As the Dems in charge of the Ukraine investigation were issuing subpoenas and arranging to take depositions related to that scandal, they did nothing about Trump’s sellout in the Oval Office. They did not demand the memos about that meeting that were restricted. They did not announce this would become an element of the impeachment probe. Another House Democrat says the party’s leadership “is laboring under the impression you can keep impeachment narrowly focused on Ukraine. They think people are sick and tired of Russia  and Putin. But this was aiding and abetting the enemy—and in the Oval Office.” (The Ukraine controversy is connected to the Trump-Russia scandal. Trump is in trouble with his phone call to Zelensky partly because he was leaning on the Ukrainian president for material that he believed would support an especially nutty conspiracy theory that insists the Russia scandal was nothing but a hoax created to undermine Trump.)

A House aide working on the Ukraine inquiry notes that the Democrats are overwhelmed with just the work of that probe. They are producing subpoenas and conducting interviews on a fast pace to prepare articles of impeachment by Thanksgiving. And this aide says there is “not enough bandwidth to jump into other stuff.” The aide adds, “Right now we are focused on concerns emanating from the president’s call on the Ukraine. We have rolled out a full agenda of investigative work. We are taking note of all these other issues that have emerged. But for now we are focused on this agenda.”

Perhaps zeroing in on the Ukraine scandal and Trump’s moblike abuse of power is the practical decision for House Democrats and investigators. It’s new; it’s manageable. It’s not muddied up the way the Trump-Russia controversy has become (due to the years-long disinformation campaign mounted by Trump and his cultists). Yet this means Trump is being let off the hook for a monumental act of perfidy. Consider this: The president of the United States, according to this report, essentially countenanced an attack on the United States. What could warrant impeachment more? But this story comes and then it goes. Only in the era of Trump would a possible act of treason on the part of the president be considered a second-tier matter and become lost in the swirl of tweets and other outrageous misdeeds.