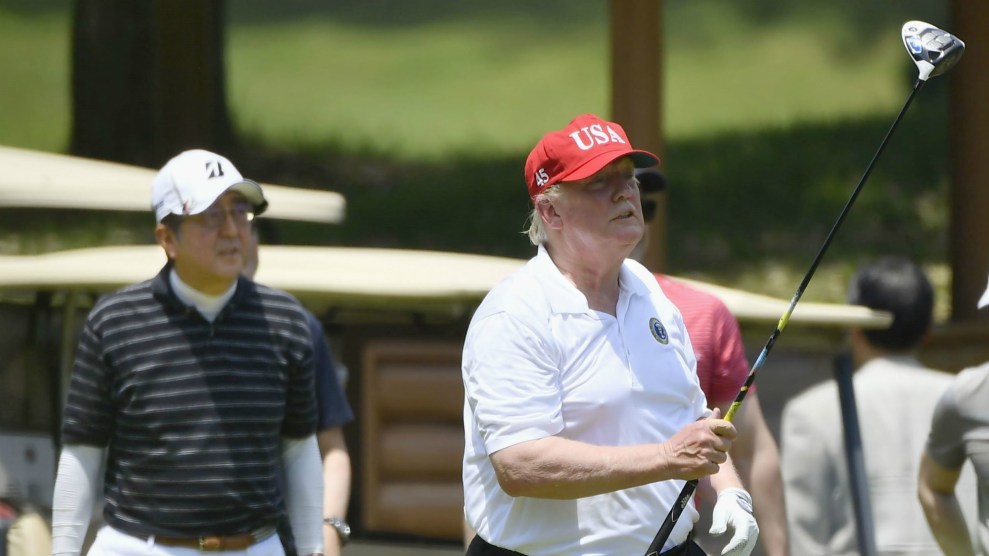 The United States will host the next G7 summit of world leaders at Donald Trump’s struggling Doral golf resort outside of Miami—a move that essentially forces foreign governments to line the president’s pockets. The decision poses perhaps the largest conflict of interest yet for a leader whose presidency is riddled with them, thanks to Trump’s refusal to separate himself from his personal business empire.

Trump’s acting chief of staff Mick Mulvaney made the announcement Thursday afternoon at a White House press conference, where he claimed the controversial decision would not violate the Constitution’s emoluments clause, which prohibits top federal officials from accepting payments or gifts from foreign governments. Mulvaney claimed the summit would be hosted “at cost,”  though it’s unclear how the Trump Organization proposes to ensure that and, moreover, any revenue would still boost the resort’s bottom line.

Trump's announced that next year’s G7 meeting will be held at the Trump National Doral in Miami.

Despite Trump’s claims he does not profit from his position, he retains full ownership of his business empire, including the Doral resort. The president says he no longer has day-to-day control of his businesses, but he retains the ability to withdraw money from them at any point, and the mortgages on the Doral are listed as his own personal liabilities.

Trump purchased the Doral property in 2012 for $150 million, borrowing $125 million from Deutsche Bank to fund the purchase. Since then, the venture has not flourished. Bringing in thousands of members of foreign delegations—at the expense of each country’s taxpayers—would be a huge boost for the property.

Noah Bookbinder, executive director of Citizens for Responsibility and Ethics in Washington, a watchdog group that previously filed a complaint about the inclusion of Doral on a list of potential G7 sites, said that Trump is using the US government’s international power and influence to promote his personal business interests.

“The president is now officially using the power of his office to help prop up his struggling golf business. There appears to be no bottom to President Trump’s corruption,” he said in a statement. “What matters most to him is his personal profit and personal advancement, not the best interests of the American people. There is now no question that the American government is being used as a public relations and marketing subsidiary of the Trump Organization.”

The G7 summit annually brings together the leaders of the world’s seven largest economies, along with a slew of other foreign leaders and delegations hoping to push an issue or hold talks on the sidelines of the event. The United States last hosted the G7 in 2012. President Barack Obama’s administration initially planned to convene the event in downtown Chicago, but because of security concerns it held the conference at Camp David, the presidential retreat in Maryland. Member countries take turns hosting the event, and it is usually held at a high-end resort or conference center—and typically the summits cost a lot of money. The most recent G7, held in Biarritz, France, in August, was estimated to have cost French taxpayers about $40.5 million. But those are just the costs of hosting the event—the member delegations are responsible for paying for lodging and other expenses.

USASpending.gov, a government website that tracks federal expenditures, lists at least 10 payments to the Biarritz hotel where the most recent G7 summit was held, totaling at least $1.4 million for accommodation and “hotel services.” It’s unclear if this reflects the full bill for the American G7 delegation or if there were other costs. But if seven delegations spent roughly that much at Trump’s Doral resort, that would amount to $9.8 million in revenue.

In Trump’s annual personal financial disclosure, Doral has shown declining revenues—from $92 million in 2015 to about $75 million in 2018. At the same time, according to local property tax filings, the resort’s profitability slipped from $13.8 million to $4.3 million between 2015 and 2017. The club also seems to be having a hard time attracting new members. Under the club’s rules, members who resign can get their initial deposit fees returned—but for one departing member to be reimbursed, four new members must sign up. In August, the Miami Herald reported that only two departing members received refunds between December 2017 and January 2019, suggesting that only eight new members joined the club in that period.