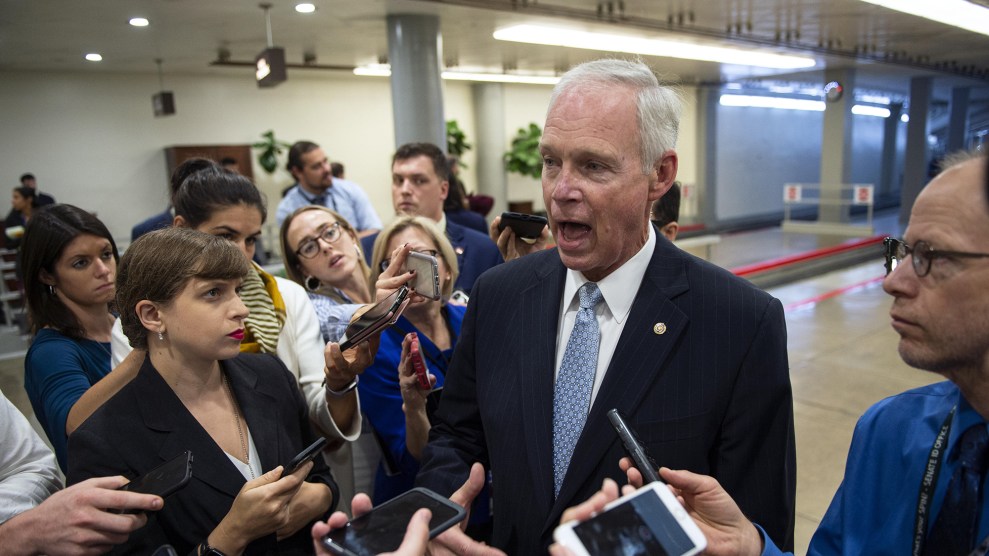 Sen. Ron Johnson (R-Wisc.) gave a wild performance on “Meet the Press” Sunday, refusing to answer questions posed by host Chuck Todd, instead peddling unfounded conspiracy theories about the 2016 election. The bizarre interview is a demonstration of how President Donald Trump’s allies have responded to the impeachment inquiry by rallying around debunked theories about Democratic plots and deep state set-ups during the 2016 election, while dismissing the findings of Robert Mueller’s investigation into Russian interference.

Johnson’s refusal to answer questions, paired with Todd’s dismay that Johnson was embracing conspiracy theories, may also explain why other Trump allies refused to go on the Sunday news shows. In the midst of a tumultuous impeachment inquiry, no administration official or GOP leader from the House or Senate accepted an invitation to appear on any of the weekends news programs.

The interview went south at the very beginning. Rather than answer Todd’s first question about Ukraine, Johnson began his appearance with a jumble of old, debunked theories in which Johnson, reading from a paper on which he had prepared his comments, seemed to claim that former FBI agent Peter Strzok and former FBI director James Comey had framed Trump. “Senator, I have no idea why Fox News propaganda stuff is popping up on here,” Todd said in response.

Johnson went on to defend Trump by putting forward a far-right conspiracy theory that the Clinton campaign and the Democratic National Committee worked with Ukrainians in 2016 to defeat Trump—this is the conspiracy theory which Trump seems to believe and which Attorney General Bill Bar and US Attorney John Durham are trying to substantiate both in Ukraine and through meetings with intelligence officials from multiple other countries. “I don’t know to what extent the Ukrainians” interfered in the 2016 elections, Johnson said. “I don’t know to what extent [the] DNC and [the] Hillary Clinton campaign were involved in kind of juicing up the Ukrainian involvement.”

WATCH: @chucktodd: "All right, senator, I have no idea why a Fox News conspiracy, propaganda stuff is popping up on here."@senronjohnson: "Because this is underlying exactly why President Trump is upset … at the news media." #MTP #IfItsSunday pic.twitter.com/onTZzhDo0s

Johnson is the senator most enmeshed in the Ukraine scandal. As the chairman of the Senate subcommittee with jurisdiction over the region, Johnson attended the inauguration of Ukrainian President Volodymyr Zelensky in May, alongside Energy Secretary Rick Perry, who stepped in after Vice President Mike Pence dropped out of the trip. In August, the US ambassador to the European Union, Gordon Sonland, told Johnson that Trump was withholding military aid to Ukraine in order to pressure the country’s leadership to undertake investigations desired by the president. Johnson was troubled by this, and asked Trump about it on a phone call on August 31. As reported by the Wall Street Journal, Johnson says that Trump vehemently denied the quid pro quo. In his interview with Todd, Johnson repeated Trump’s denial.

But text messages released last week between Sonland and top diplomats show that the officials working on Ukraine believed aid was linked to a request for politically expedient investigations. “I think it’s crazy to withhold security assistance for help with a political campaign,” Bill Taylor, a top US diplomat in Ukraine, texted Sonland.

During his “Meet the Press” interview, Johnson denied that Trump wanted Ukraine to investigate his opponents ahead of the 2020 elections—despite the significant public evidence to the contrary, including the fact that Trump explicitly asked Zelensky to investigate former Vice President Joe Biden and his son in the summary of the July 25 call.

When Todd pressed Johnson on whether he trusts the FBI and the CIA, Johnson said no, citing people who are no longer in those agencies like Strzok, Comey, and other career officials whom Republicans claim—in yet another conspiracy theory—tried to frame Trump as part of a deep state plot in 2016. “Do you trust them now?” Todd repeatedly asked. Johnson refused to answer the question.

"I don't trust any of those guys in the Obama administration." pic.twitter.com/fI2QyTIwbv