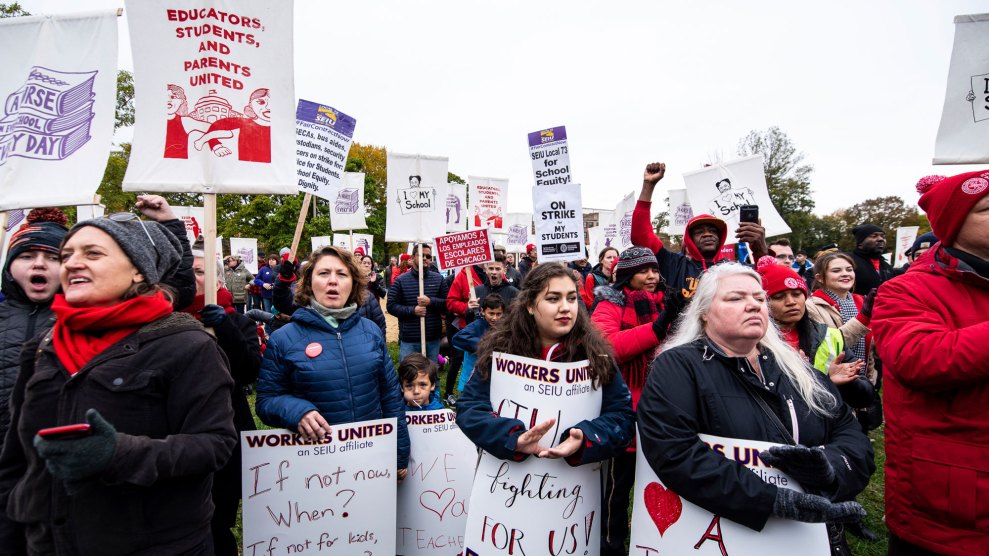 After 11 days, the Chicago teachers’ strike is finally over.

On Wednesday night, a week and a half after tens of thousands of teachers walked out of classrooms to demand more support staff, higher pay, and smaller class sizes, Chicago teachers’ union leaders and city officials announced they had come to an agreement. The highlights include: $35 million toward reducing class sizes; hundreds of new social workers, case managers, and other support staffers throughout the district; and a teacher pay raise of 16 percent over five years.

An overview of our half-billion dollar offer to CTU. $380M for teacher compensation and benefits, $70M toward equity-focused staffing, and $50M toward programs. pic.twitter.com/UfQicKV8zE

We have a tentative agreement, but we do not have a return to work agreement. So we will be at City Hall at 10 a.m. to demand the mayor return our days.

The strike was the longest in the city since 1987 and echoed the frustrations of recent labor battles in both conservative states like Oklahoma and West Virginia and progressive cities like Los Angeles, Denver, and Oakland. Chicago Teachers Union (CTU) vice president Stacey Davis Gates told Mother Jones ahead of the strike that the contract battle was about equity in the city’s schools: “It is not fair for us to go into school communities and to manage poverty. It is not fair for our teachers to go into these school communities and manage the lack of resources and to manage white supremacy and to manage low expectations.”

The contentious standoff between Chicago Mayor Lori Lightfoot, Chicago Public Schools CEO Janice Jackson, and CTU leaders heightened last night when union officials refused to end the strike until the two sides could agree to how many days would be tacked onto the end of the school year to make up for the work stoppage. Earlier in the week, Lightfoot had criticized teachers’ union officials for holding up negotiations and “moving the goalposts.” “Are we really keeping our kids out of class unless I agree to support the CTU’s full political agenda wholesale?” Lightfoot said to reporters.

On Thursday, both sides compromised to add five days to the end of the school year, half the time teachers were out of work. When Lightfoot announced that the city’s 300,000 students (Chicago is home to the third-largest school district in the country, behind New York City and Los Angeles) would return to school tomorrow, CTU president Jesse Sharkey made a point of not standing by her side at the press conference.

More @stacydavisgates: "This is a sad day for Chicago that a leader at the highest level of government chooses to punish students with the loss of instructional days and teachers who have fought for justice and equity." Five days "wasn't an agreement, it was an or else," she said https://t.co/LmZaJHD7bv

“This deal will move us closer to ensuring that our most vulnerable students receive the instruction, resources and wraparound services they need to thrive,” Sharkey said in a statement. “No educator wants to leave their classroom, but our 10-day struggle was the only option we had to enshrine, ensure and enforce real change for our students and school communities. This contract will put a nurse in every school, a social worker in every school and provide a real solution for thousands of homeless students in Chicago.”

Here’s the tentative agreement between @CTULocal1 and Mayor Lori Lightfoot — read it for yourself. The union, though, says it won’t accept offer unless mayor agrees to extend school year so teachers get paid for strike days @chicagotribune https://t.co/pnL6WhkXHf