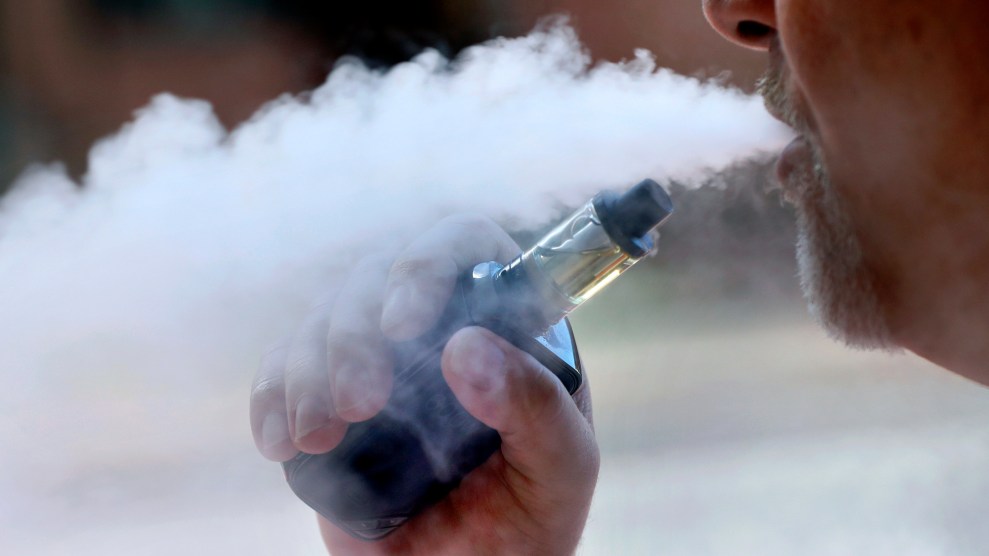 A man exhales while smoking an e-cigarette.Robert F. Bukaty/AP

A few days ago, the Centers for Disease Control and Prevention updated the public on the news that’s been freaking people out for weeks: Vaping is making users sick, and it now has been linked to 530 confirmed or probable cases of a mysterious lung illness, including eight deaths, in recent months. This is a jump from a week earlier, when the CDC knew of 380 cases, including six deaths.

Young people shared footage of themselves destroying vape pens—smashing them with hammers, flushing them down the toilet, or tying it to a balloon and letting it float away.

It’s become something of a full-blown public health crisis. President Donald Trump has announced his administration would ban flavored e-cigarettes, which are used by millions of teens, saying, “We can’t allow people to get sick. And we can’t have our kids be so affected.” Then last week, New York followed suit, becoming the second state after Michigan to ban the sale of flavored e-cigarettes. On Thursday, the Food and Drug Administration disclosed a criminal investigation into the matter, focusing on the supply chain. Even teens responded: In videos posted to social media platform TikTok, young people shared footage of themselves destroying Juuls and other vape pens, both in jest and not—smashing them with hammers, flushing them down the toilet, or, in one case, tying it to a balloon and letting it float away.

But while the government makes moves, there are still a lot of questions as to what is happening and why, and if the governmental action will even make a difference. We do know that the vaping illnesses are happening all over the country, affecting people across a wide range of ages. We also know that in each case, doctors couldn’t find evidence of an infection in the patient—but all patients reported vaping. And we do know early reports suggest most of the patients vaped THC, the psychoactive molecule in cannabis; on the other hand, some patients report vaping just nicotine.

Mother Jones called some experts to try to figure out what we actually know—and the many, many things we still don’t.

We know a lot of young people are vaping. Are they the ones getting sick?

Most of the concrete data on the vaping illnesses so far comes from numbers released by the CDC on Thursday last week. In an analysis of 373 cases (out of 530 and counting), the vast majority of patients are male, two-thirds of patients are between the ages of 18 and 34, and 16 percent are under 18 years old. (This echoes findings from an analysis of 53 early cases of vaping-linked lung disease in Illinois and Wisconsin, published in the New England Journal of Medicine this month.)

It’s pretty unsurprising that teens are disproportionately affected, given previous research that shows millions of teens vape. Overall, an estimated 3.6 million middle and high schoolers have used e-cigarettes in the past 30 days. “We have not seen numbers like this in probably two, three decades [since the rise in popularity of] cigarettes,” says Bonnie Halpern-Felsher, a professor of pediatrics, adolescent medicine at Stanford University and founder of the Tobacco Prevention Toolkit and the Marijuana Awareness and Prevention Toolkit.

Still, there are older patients showing symptoms of this illness. According to the CDC, 17 percent of patients they’ve analyzed so far are 35 years old or older. At least six of the deaths have been people middle-aged or older.

Is there anything else we know about who is getting sick?

So far, the CDC hasn’t released information on any other demographic factors among the patients.

Are the illnesses happening in a certain location?

Nope. So far, people have gotten sick in 38 states and one US territory, according to the CDC. The deaths are just as spread out—occurring in California, Illinois, Indiana, Kansas, Minnesota, Missouri, and Oregon.

Is this happening with people vaping THC or vaping nicotine?

Based on initial data from some states, most people with symptoms used products containing THC, many used both THC and nicotine, and some report vaping just nicotine. The CDC hasn’t released a full dataset yet, but here are the stats from the study of 53 early cases in Illinois and Wisconsin: 44 percent of patients surveyed said they vaped both nicotine and THC, while 37 percent reported vaping only THC, and 17 percent reported vaping only nicotine.

So then why is Trump banning flavored nicotine e-cigarettes?

Good question. Trump’s decision is intended to get products that appeal to teenagers off the market. It is not the same as trying to combat the mystery lung illnesses. “Conflating the lung injuries as the reason for banning flavored nicotine liquids doesn’t make any sense,” says Neal Benowitz, a professor of medicine at the University of California-San Francisco. “They’re really separate problems.”

“Conflating the lung injuries as the reason for banning flavored nicotine liquids doesn’t make any sense.”

Still, experts emphasize that banning flavored e-cigarettes is a good move, regardless of timing. Scientists don’t know if all the flavors infused into the oil are safe to vape, which is particularly dangerous given that manufacturers seem to deliberately appeal to kids with flavors like Strawberry Lemonade, Sour Apple, and Bubblegum.

Researchers are still “playing catch-up” on the science, Judith Zelikoff, a professor in the Department of Environmental Medicine at NYU, tells Mother Jones. “What are the health effects, if any, of the flavorants?” She says the flavors shouldn’t have had to be banned—because they shouldn’t have come out “until all the safety testing and research was done.”

Vaping has been around for years. Are these illnesses a new trend?

“What it appears at this time—although again, I would caution that this is preliminary—is that there does appear to be an increase of cases starting May-June of 2019,” Jennifer Layden, chief medical officer and state epidemiologist at the Illinois Department of Public Health, said on a press call in early September. “That is higher than it was in 2018. So it would suggest that it’s a new phenomena.”

So why are people getting sick now?

This is also not totally clear, but the severity of these illnesses suggest it’s related to an added chemical or chemicals in the products. “These acute illnesses strongly suggest to me that there’s some kind of toxicant involved or a mixture of toxicants,” Zelikoff says. When certain chemicals are mixed together, she says, they may react with each other and form new, potentially dangerous ones.

One chemical that investigators have their eye on is vitamin E acetate, which according to cannabis news site Leafly, is “a popular new diluent thickener found mostly in illicit market THC vape carts.” Preliminary lab results show vitamin E acetate has been present in many of the products consumed by people who have later fallen ill. In New York, for example, it was found in “nearly all cannabis-containing samples” tested by a state lab in September, though it’s unclear how many samples were tested. (Vitamin E acetate is not an approved additive under New York’s medical marijuana program.)

The CDC and FDA investigations are still ongoing, and they haven’t confirmed vitamin E acetate has caused the illnesses.

Where are people getting these products?

At this point, investigators don’t know how many of the products used by affected individuals were bought through legal or illegal means. In New York at least, early data suggests many of the THC products were purchased off the street. But that hasn’t been verified at a national scale. In Oregon, authorities confirmed the death of a person who vaped THC oil purchased at a legal dispensary.

Either way, it is never a good idea to buy vape pens or juice on the black market, and health officials recommend avoiding them, especially now. “Anyone who uses an e-cigarette or vaping product should not use or buy these products off the street and should not modify or add any substances to these products,” Anne Schuchat, principal deputy director of the CDC, said on a press call Thursday.

I vape now. Should I switch to cigarettes?

No! As we all almost certainly know, the healthiest option is to use neither. “During the current investigation of lung injury associated with e-cigarettes, or vaping, CDC recommends that if you are concerned about these specific health risks, you should consider refraining from using e-cigarette or vaping products,” Brian King, the deputy director of research translation at the CDC, tells Mother Jones in an email. “If you are an adult who uses e-cigarettes because you have quit cigarette smoking, do not return to smoking cigarettes.”

“One of the challenges that we have with e-cigarettes is the evidence of long-term health effects doesn’t really exist.”

It’s also worth mentioning that vaping is never safe for youth, young adults, pregnant women, or adults who do not currently use tobacco products, according to the CDC.

Should we be nervous that there will be unforeseen, long-term effects of vaping?

Modern nicotine e-cigarettes have only been around in the United States for a little more than a decade. With a lack of long-term studies, it’s unclear what the health effects will be for users later in life. For example, according to an extensive 2018 report published by the National Academies of Sciences, Engineering, and Medicine, there have been no long-term studies on the effect of nicotine e-cigarettes on cancer in humans, though there is “substantial evidence” that some chemicals present in nicotine e-cigarettes (e.g., formaldehyde) “are capable of causing DNA damage” and could increase cancer risk.

“One of the challenges that we have with e-cigarettes is the evidence of long-term health effects doesn’t really exist,” says Dave Eaton, an emeritus professor of toxicology at the University of Washington and chair of the committee that wrote the 2018 report. “I mean, they haven’t been around long enough for us to see that. We don’t have books full of evidence as to how harmful this is, as we do now for tobacco cigarettes.”

Cannabis vaporizers have been on the market for about the same amount of time, but because marijuana is still technically a Schedule I drug under federal law, studying it has an added layer of bureaucracy. “Now that it’s being legalized, more and more scientists are trying to study [marijuana], but it wasn’t fully studied before,” Zelikoff says. “There are very few scientific studies.”

After all, it wasn’t until the 1950s and ’60s that research confirmed the effects of smoking, decades after cigarettes took hold of the market.