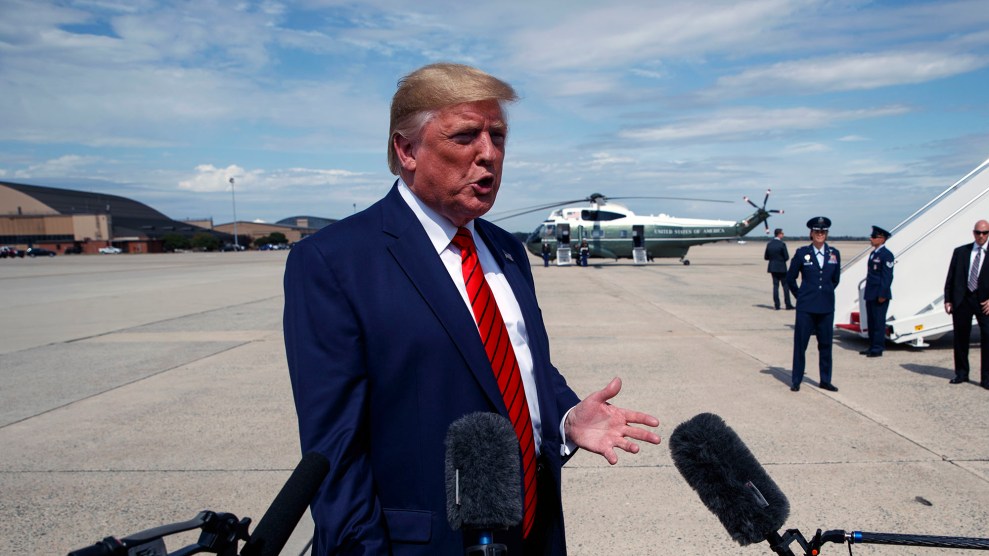 Just about every day Donald Trump busts a norm—a norm of politics, a norm of governance, a norm of decency. This never-ending fusillade makes it is easy to lose sight of his individual acts of lowering (or demolishing) standards. Yet on Thursday morning, Trump’s top intelligence official presented a stunning reminder that Trump has violated what ought to be an important principle: A president should not brazenly lie and make shit up.

A president should not brazenly lie and make shit up.

Yes, I know, Trump does this All The Time. And everyone—the media, Democratic and Republican lawmakers, and citizens throughout the land—have become inured to his audacious prevarications. Often, his false claims are directly contradicted by his own hirelings. (Case in point: Virtually all of Trump’s top national security appointees have stated they accept the intelligence community’s assessment that Russia covertly intervened in the 2016 election to help Trump, though Trump has repeatedly discounted or dismissed this finding.) Yet it still is important to push the pause button when one of Trump’s senior advisers publicly undermines Trump’s demagoguery and offers evidence that Trump is a doesn’t-give-a-damn-about-the-truth deceiver-in-chief. And that’s what happened when acting Director of National Intelligence Joseph Maguire appeared before the House Intelligence Committee for a fiery hearing focused on Trump’s latest scandal: the president’s alleged attempt to muscle the Ukrainian president to produce dirt he could use to undermine special counsel Robert Mueller’s investigation and to harm Joe Biden.

The subject, of course, was Maguire’s handling of a complaint sent by an unidentified intelligence official to the inspector general for the intelligence community that accused the president of abusing his office for political purposes and that claimed White House officials tried to bury evidence of this misconduct. It’s this controversy that has finally pushed House Speaker Nancy Pelosi to declare that House Democrats were transforming their multiple investigations of Trump into an impeachment inquiry. Since this story emerged days ago, Trump has been fighting back in his usual manner of denying reality and disseminating false narratives and charges—that is, gaslighting. And a key component of his counter-attack has been denigrating the anonymous whistleblower.

Trump has brutally gone after the whistleblower in a series of tweets. He questioned his or her loyalty, asking, “Is he on our Country’s side”? He called this member of the intelligence community “highly partisan” and suggested this person was part of a conspiracy mounted against Trump by Democrats and the media. In a tweet citing a Fox News analyst, Trump accused the whistleblower of spying on him by secretly listening to his conversation with Ukraine President Volodymyr Zelensky. (Trump was suggesting the whistleblower had committed a criminal act.) In another tweet citing another right-wing commentator, Trump essentially said the whistleblower was part of a cabal mounting a malicious and seditious effort against him. And Trump retweeted a conservative activist who claimed that the intelligence community’s inspector general had concluded the whistleblower had a “political bias” against Trump. (The IG found “some indicia of an arguable political bias on the part of the Complainant in favor of a rival political candidate” but nevertheless determined that the whistleblower was credible.)

That is, before the whistleblower’s complaint was released on Thursday morning, Trump had mounted a robust smear campaign against this unknown person, pronouncing him or her a rat-fink and a traitor who was out to get Trump—a person whose complaint could not be taken seriously.

At the Maguire hearing, the acting DNI was asked about the whistleblower—whose identity remained a secret. Is the whistleblower a “political hack,” Rep. Adam Schiff (D-Calif.), the chairman of the committee queried. Maguire replied, “I believer the whistleblower is acting in good faith.” Schiff followed up: “You don’t have any reason to accuse them of disloyalty to our country?” Maguire provided an unequivocal response: “Absolutely not…I think the whistleblower did the right thing.”

In other words, there was no basis for Trump’s denunciations of the whistleblower.

Speier then asked Maguire if Trump had asked him to share the identity of the whistleblower. “I can tell you emphatically no,” he said. And had anyone else in the White House or Justice Department done so? “No,” he said.

So if Trump and the White House did not know the whistleblower’s identity, how could Trump question this person’s loyalty, blast him or her as a partisan plotter, and accuse the whistleblower of spying? You know the answer: Trump doesn’t need facts to mount a smear campaign. (Did Roy Cohn?) Trump concocts phony conspiracies and misleading narratives all the time. (Remember birtherism?) When caught in a misdeed, his first instinct is to attack and vilify, the truth be damned. After all, when has Trump been held accountable for such malfeasance?

The Ukraine scandal is yet another indication that Trump places his private interests over public service and recognizes few restraints when it comes to abusing the power of his office. And this instance of his lies being revealed by the man who runs the intelligence community for Trump signals yet again that Trump is a serial fabulist. In days past, a president caught in such blatant lying might actual suffer consequences—at least, a few pokes in the media and perhaps even within his own party for besmirching a US government official. These days, this Trump lie is just another piece of straw in one huge haystack. Trump’s intelligence chief tells us that Trump is a liar—and though the contradiction has drawn media attention, Trump’s action is hardly covered as outrageous. That’s a sign of Trump’s victory in his war against the norm of honesty.