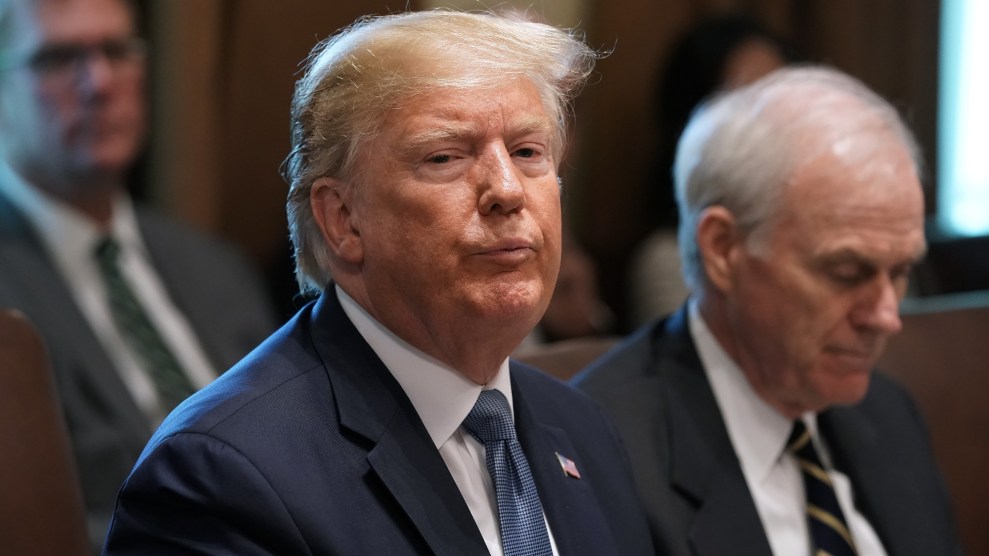 The long-simmering feud between the United States and Iran roared back to life Saturday as the Trump administration pinned blame on Tehran for the recent attacks against crucial Saudi Arabian oil facilities that were carried out with a fleet of drones. The Houthis, an Iranian-backed rebel group fighting the Saudi-led military coalition in Yemen, took credit for the strikes, which “knocked out more than half the kingdom’s oil output for days or more” and sent the global oil market into turmoil, the Washington Post reported.

Suspicion quickly fell on Iran over its alleged role in supplying the weapons. On Twitter, Secretary of State Mike Pompeo faulted the Islamic republic for the “unprecedented attack on the world’s energy supply” but provided no evidence for this assertion, which Iran’s foreign minister denied. President Donald Trump hinted at Iran’s involvement in a series of tweets, but he mostly used the burgeoning crisis as another opportunity to attack the media for accurately reporting his past offer to meet with Iran’s leaders without preconditions. That isn’t the only time Trump has contradicted himself on Iran; here are three recent examples, beginning with his preconditions flip-flop:

Trump lies about promise to meet Iran’s leaders without preconditions

On Sunday, Trump lashed out at media reports noting that he’d previously volunteered to meet with Iranian officials without preconditions. “That is an incorrect statement (as usual!),” he wrote on Twitter. This is an easily-disproved lie. Trump has offered to meet with Iran’s leaders. Trump’s advisers, including Pompeo and State Department envoy Brian Hook, have made the same promise publicly.

The Fake News is saying that I am willing to meet with Iran, “No Conditions.” That is an incorrect statement (as usual!).

In June, days after Trump nearly ordered a strike on Iran for downing an unmanned Navy drone, he sat down with NBC’s Chuck Todd for an an interview in which Todd asked if Iran would have to meet some preconditions before Trump would agree to talks.

“Not as far as I’m concerned,” Trump said. “No preconditions.”

He previously made that same point last July during a press conference with Prime Minister Giuseppe Conte of Italy, telling reporters he “would certainly meet with Iran if they wanted to meet.”

“No preconditions,” he said. “They want to meet, I’ll meet, whenever they want.”

Once Trump set this new benchmark for negotiations, the State Department reiterated it. Last week, Pompeo told reporters at a White House press briefing that Trump “has made very clear he is prepared to meet with no preconditions.”

Trump’s lie didn’t go unnoticed on Twitter, where Rep. Ted Lieu (D-Calif.), a member of the House Foreign Affairs Committee, pointed it out. “So when you say Fake News,” Lieu asked Trump, “are you referring to yourself?”

Trump rushes to Saudi Arabia’s defense, despite previously saying the Saudis should “fight their own wars”

The attacks on Saudi oil facilities not only ratcheted up tensions between Iran and the US, but also cast a further spotlight on the controversial American alliance with Saudi Arabia. A spokesperson for the Saudi-led coalition in Yemen, which receives support from the US, said Monday that the weapons used to attack its oil installations were Iranian in origin and did not come from Yemen. The Saudis did not provide evidence for this assertion—the spokesperson said results from the investigation would eventually be made public—but Trump indicated Sunday that the Saudis’ portrayal of events would play a key role in determining his response. In a tweet, Trump said the US was “waiting to hear from the Kingdom as to who they believe was the cause of this attack, and under what terms we should proceed!”

Saudi Arabia oil supply was attacked. There is reason to believe that we know the culprit, are locked and loaded depending on verification, but are waiting to hear from the Kingdom as to who they believe was the cause of this attack, and under what terms we would proceed!

Since his election, Trump has firmly embraced Saudi Arabia as a preeminent American ally in the Middle East despite the authoritarian state’s troubling history of suppressing dissent, stifling women’s rights, and, recently, ordering the execution of a Washington Post journalist who wrote critically about Saudi Crown Prince Mohammed bin Salman. The civil war in Yemen, where the Saudis are fighting the Iranian-allied Houthis, has become the world’s most devastating humanitarian catastrophe. All the while, Trump has described the US as “a steadfast partner” to the Saudis, who he calls “a great ally in our very important fight against Iran.” The Trump administration has repeatedly approved American arm sales to the kingdom and its Middle East allies.

Five years ago, Trump spoke much differently about the Saudis, telling them in a tweet to either “fight their own wars” or pay the US “an absolute fortune to protect them.”

Saudi Arabia should fight their own wars, which they won't, or pay us an absolute fortune to protect them and their great wealth-$ trillion!

Trump has made no secret of his disgust for the nuclear deal negotiated by his predecessor, Barack Obama. He’s called it “no good” and “horrible,” and last year—with the support of then-national security adviser John Bolton—he finally abandoned it. The path toward diplomacy since then has been perilous as Trump has ratcheted up sanctions on Iran as part of his “maximum pressure” strategy. Iran, meanwhile, has begun breaking the terms of the 2015 agreement and is pledging not to negotiate with the US until sanctions are lifted.

Now Trump is reportedly mulling a significant, and contradictory, change of course. According to the Daily Beast, he “is actively considering a French plan to extend a $15 billion credit line to the Iranians if Tehran comes back into compliance” with Obama’s nuclear deal. The bailout plan would offset a decline in Iran’s oil sales and assist its struggling economy. The idea was originally introduced by French President Emmanuel Macron and Trump appears to have recently come around to it. Trump said at the G7 meeting in France last month that Iran might need a “short-term letter of credit or loan” that would “get them over a very rough patch,” but his aides later said Trump would only consider the idea “after a new agreement” was reached with Iran, the New York Times reported.

The Daily Beast’s more recent reporting suggests Trump is closer to accepting the idea than previously thought. “Several sources” told the news outlet that “foreign officials are expecting Trump to either agree to cooperate on the French deal or to offer to ease some sanctions on Tehran.” The arrangement could be figured out this week as Trump and President Hassan Rouhani of Iran are both expected to attend the United Nations General Assembly meeting in New York.