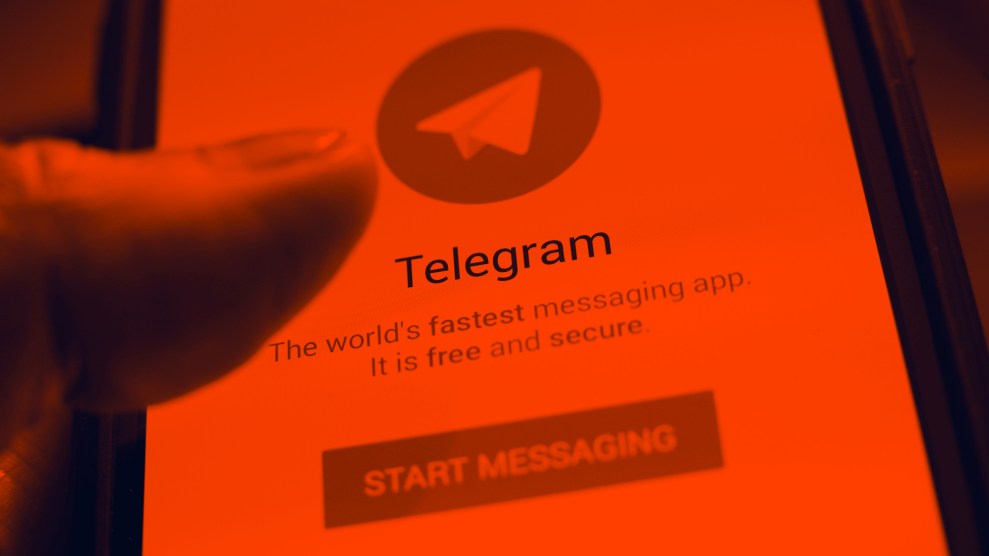 Anti-Semitic trolls are creating an online list of Jewish people who are critical of white nationalism. Since its creation almost a month ago, it has become the fastest-growing alt-right group on the popular Telegram chat service.

The list is mostly made of archived tweets from individuals criticizing white supremacy, misogyny, and other types of bigotry. Each profile includes a tweet in which the person in question describes themselves as Jewish. The first post on the list singled out Sen. Richard Blumenthal (D-Conn.), but posters quickly moved to documenting far less prominent people that they believe are Jewish. The list includes many who are not public figures, or who have only modest profiles as rank-and-file activists, journalists, or social media figures. Around a dozen people have been added nearly every day.

“When you curate public information in this way, you’re sending a message.”

The chat has been the fastest-growing alt-right public Telegram channel since the start of September, according to metrics compiled by a separate far-right Telegram group tracking similar channels. That channel’s data suggests the group has picked up over 1,500 new members in the last two weeks, averaging roughly 100 new subscriptions a day—a rate of growth three times that of the next channel. It now has 2,400 subscribers.  Because the channel is publicly accessible, is likely being viewed by many more people.

While the group’s creator is pseudonymous, they appear to be a neo-Nazi, according to Oren Segal, the director of the Anti-Defamation League’s Center on Extremism, based on a post they made in September saying they were “14 away from the magic number.” Segal believes this was a reference to the channel at the time being 14 away from 1488 subscribers; Neo-Nazis give the number significance because 14 is the number of words in a common white supremacist slogan and 88 is an abbreviation for “Heil Hitler.”

Telegram is known for its deep commitment to free speech and hands-off approach to private conversations. While Telegram’s terms of service are brief, they do acknowledge a difference between chats involving small groups of people and public groups. The channel could be in violation of the platform’s rule against “promot[ing] violence on publicly viewable Telegram channels.” While the channel’s creator has written that they’re not encouraging violence against anyone on the list, a likely neo-Nazi creating a list of Jewish people is arguably inherently violent. The company did not respond to multiple requests for comment.

White supremacists have kept similar lists on neo-Nazi forums since the early aughts. The most recent iteration of this list appears to have started on 4chan in July, according to the ADL, but migrated to Telegram after the imageboard removed it, deciding that it didn’t even meet its notoriously low standards. Another version of the list was published on Twitter via an account the company quickly suspended.

“A private list like this, in and of itself is problematic and potentially dangerous,” said Segal. “That this one is public demonstrates that they’re using this platform, that they want to amplify the goals of this channel. They’re just exploiting Telegram as a place that they know there will be no repercussions for posting this list.”

Segal also noted with concern that the dates of the channel’s first posts suggest it was launched in late August. “As we get closer to the one year anniversary of the Tree of Life Synagogue shooting and as we see Jewish institutions being targeted and attacks being targeted in this country, people should understand the danger of a list,” he said. “It’s never okay, but now we hope that there’s a stronger sense of why this list is problematic.”

The channel is a part of a broader trend of neo-nazis, white nationalists, and other alt-right groups flocking to Telegram as they get banned from other platforms. Others have taken to other platforms like Gab which bills itself as a free-speech haven. That site has become tightly associated with bigotry and white supremacy, making it less attractive to members of the alt-right who want to gain an air of legitimacy on mainstream platforms.

While the channel with the list of Jewish individuals doesn’t explicitly call for violence, Segal said the list is dangerous and inextricable from hate.

“It’s not like this channel is merely a collection of tweets from Jewish people. It’s wrapped in white supremacy,” he said. “If we’ve learned anything over the past year if you put info in public spaces frequented by white supremacists you have no idea who’s going to act on that. “This is public information, but when you curate public information in this way, you’re sending a message. And I believe that’s creating a potential danger that can’t be underestimated.”

Unlike Gab and other platforms that were specifically created in reaction to Facebook, YouTube, Twitter and other sites tightening moderation practices, Telegram launched as a secure chat app, and earned a reputation separate from its increasing status as a home of bigotry and hate.

While Telegram is known for its laissez-faire approach to content moderation, it has removed dangerous groups from its platform. In 2015, the company deleted dozens of pro-ISIS channels. But pro-ISIS groups continued to use the platform; in the words of one study the site “play[s] a critical role” in helping the group spread its propaganda globally.

Why the list was kicked off 4chan but remains on Telegram is something that Segal says he doesn’t understand: “Telegram has to ask themselves what’s the point of letting this be accessed.”