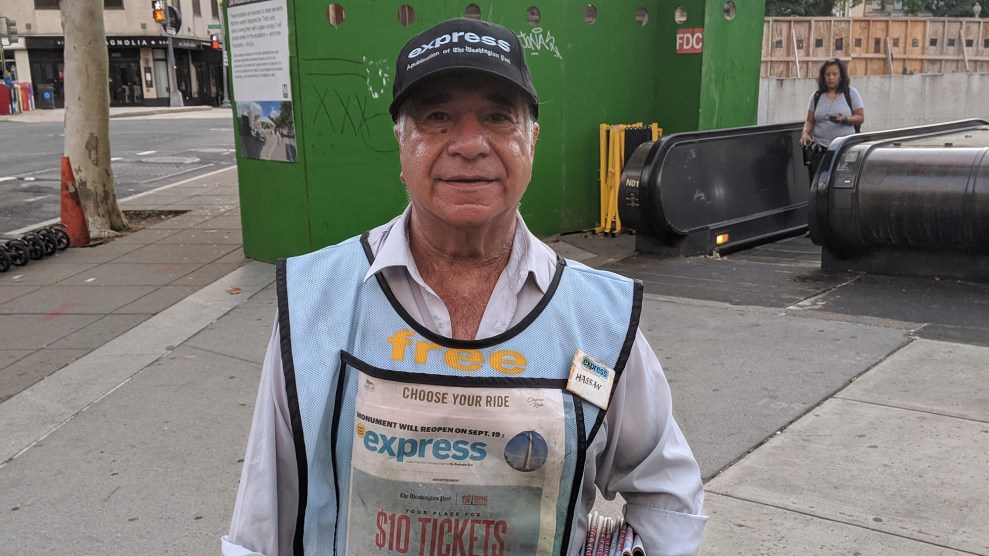 Hassan Nezhadessivandi, 65, used to distribute the Express newspaper in Washington, DC, before it ceased publication, leaving him jobless but not without support.Bobby King Sr.

For five years, Hassan Nezhadessivandi had stood in the same spot handing out free newspapers for several hours every morning in the snow, rain, and heat. He wished commuters good morning and high-fived a few regulars.

Last Thursday, a bus driver broke the news to Nezhadessivandi that this was the last edition of his Express newspaper. The Washington, DC, commuter paper was closing, and Nezhadessivandi, 65, was crushed: He felt as if he’d been put “in the trash.”

His “customers,” however, rallied for him. Two sisters started a GoFundMe campaign that has raised about $15,000 for him as of Tuesday. One contributor wrote: “Hassan, although you probably don’t know who I am, you brightened my commute every day!” Another wrote: “You showed more commitment than I do to most things in my life.”

Visibly touched, Nezhadessivandi responded with a thank you video.

Nezhadessivandi, who came to the United States from Iran in 1978, told Washington Post columnist Theresa Vargas he didn’t expect the support from people who interacted with him for just a few seconds each morning. He was particularly grateful to the two sisters who’d launched the crowdfunding effort.

“I think if I didn’t have these two friends that went out of their way, and did that for me, what would I have done?…I would have been really stuck. At this age, 65, it’s really hard to get a job.”

The sisters have launched a second fundraising effort to help the other 74 Express distributors who abruptly lost their jobs. It has raised $18,000 so far. (Washington Post)

Crazy nachos, please. In hospice care, she had one wish: a chauffeured limo ride to her favorite restaurant with her three best friends. On September 9, firefighters carried 99-year-old Agnes “Mickey” Santillo down the steps—and she got that sweet ride with her friends to El Fenix restaurant on Dallas’ Northwest Highway, courtesy of a limo company. It may be one of the last times Santillo leaves her building, and she made the most of it. Santillo got a half order of Crazy Nachos with chicken, no jalapeños, and a Dr Pepper. “I only drink one a day,” she said. (Dallas Morning News)

Saving a school. How has Germany’s embrace of immigrants paid off for an aging nation? For the eastern town of Golzow, which had lost a third of its population in the past 30 years, new residents and community life were critical. Mayor Frank Schütz had to overcome prejudice from some townspeople to invite immigrants in a few years ago. Now, empty apartments have been filled, bakers offer Arabic pastries as well as German apple tarts, and a school, which faced closing, is prospering with children of the new arrivals. “The Syrians,” Mayor Frank Schütz said, “saved our school.” Thanks to Marcus Baram for the suggestion. (New York Times)

Pay what you can. Lisa Thomas-McMillan and her husband, Freddie, got the idea from Jon Bon Jovi and his Soul Kitchen in New Jersey. At the McMillans’ restaurant, Drexel & Honeybee’s, in Brewton, Alabama, there are no prices on the menu. All the couple asks of customers is to pay what they can for the meal—and support their broader mission of feeding the hungry. Sometimes it’s just a note of thanks from a family of four who were allowed to eat. Or a quarter from another strapped person. “If you’re down and out and struggling, coming to a decent place and enjoying a hot meal can lift your spirit,” Lisa said. “It makes that person feel better about themselves. That’s what we do. Sit down here and no one cares what’s in your wallet. We want you to leave full—full of good food and good company.” (Alabama Living)

Recharge salutes: Graphic novelist Raina Telgemeier, who is having an impact on children with anxiety issues; Virgil Mitchell, who walked free last week after sitting in jail for two years on false charges and said he never let the injustice defeat him; Zayne Cowie, a 10-year-old who took it upon himself to shield Greta Thunberg from photographers during her trip to Washington last week—and got this thank you: