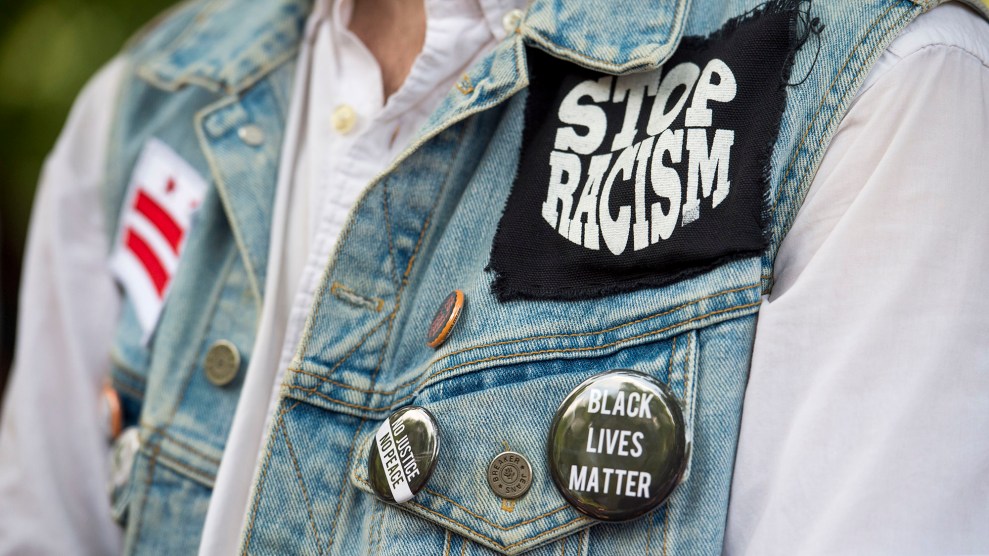 Ibram X. Kendi, a black man descended from slaves, raised predominantly in black neighborhoods, and educated at a historically black college, admits he was a racist.

It’s not enough to simply be “not racist,” says Kendi, a National Book Award-winning author and professor at American University. To undo the racism that society programs into each of us, we need to acknowledge how race has been constructed over time, and actively work against it—a practice Kendi calls “antiracism.”
In his new book, How to Be An Antiracist, Kendi combines searing autobiography with pointed analysis to show just how deeply racism is woven into our national—and global—fabric. And his first step for combatting bigotry and hatred: dispensing of the term “I’m not racist.”
“The term ‘not racist’ has been a term of denial,” Kendi tells host Jamilah King in the latest episode of the Mother Jones podcast. “How can we be antiracist if we are so convinced that we’re ‘not racist,’ when to be ‘not racist’ is to fundamentally be in denial of our own racism?”
So, according to Kendi, it’s time to start accepting our own racism so that we can begin working to erase it—just as he himself is doing. “I’m striving each day to be an anti-racist, to see the racial groups as equals, to support policies that lead to racial equity,” he says. Still, he says, he is not immune from saying, thinking, or doing racist things. “When I do those things and other people point them out, instead of me denying them, it’s critical for me to accept and admit them so that I can be different.”
Once people come to grips with the real definition of racism, Kendi argues, they “can stop denying that they may have racist ideas, that they may be supporting racist policies, that they are doing nothing in the face of racial inequity.”
Listen to this week’s podcast to listen to the full conversation, and to get a crash course in becoming an antiracist:

Also on this week’s show, we hear from supporters of a candidate who has released plans aimed at undoing some of the societal forces that allow racism to flourish, such as the racial wealth gap. At an Elizabeth Warren rally in New York, we asked Warren fans one question: “How would you convince a Trump supporter in your life to vote for Warren?”

One Warren supporter, Idris Mignott, 57, who works in non-profit fundraising, says he thinks Warren’s anti-establishment stance could appeal to people who voted for Trump in 2016, but who feel that he didn’t fulfill his promises. “A lot of people elected Trump on the idea of big structural change,” he told Mother Jones, speaking amid the crowd of people with Warren signs dispersing into the night after the Massachusetts senator’s speech. “Elizabeth Warren is for big structural change. She’s about really draining the swamp.”

Robin Mork, a 42-year-old illustrator, says winning over Trump supporters would be a tall ask, but that Warren is the right woman for the job. “She’s like an adult, American Hermoine,” she says. “She’s done the homework, she doesn’t care what you think, she’s just out there doing it, and she’s doing it well.”