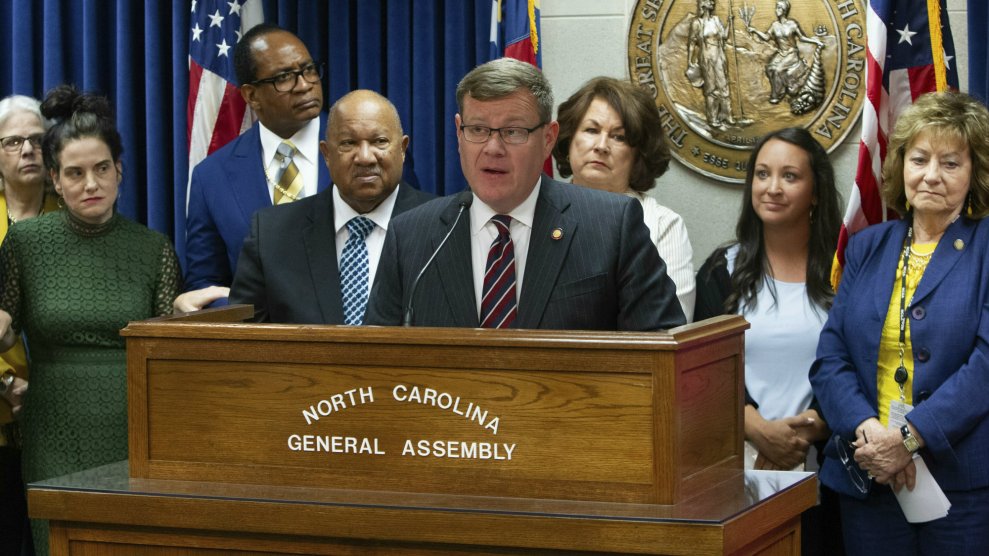 Just nine Democratic members of North Carolina’s House of Representatives were present early Wednesday morning when Republicans called a surprise vote to override Gov. Roy Cooper’s (D) veto of the state budget. With a little more than half of the 120 members in the chamber, the House voted 55-9 to force through the legislation. If the state Senate also overrides Cooper’s veto, the bill would cut corporate taxes while delivering less education spending than the governor had asked for.

Despite the fact that House Democrats say they were told there would be no votes on the budget until after 1:30 p.m., Republicans called for the vote at 8:30 a.m. Todd Barlow, the legislative counsel for House Democratic Leader Darren Jackson, says that it’s fairly common for the House to convene “no-vote” sessions early in the morning to “allow procedural business to go on.” Jackson tells Mother Jones that he “was given information that the vote would not happen until later,” and he told his Democratic colleagues that they didn’t need to be in the House until 11 a.m. The nine Democrats who were on the floor during the vote “were killing time” before a committee hearing, one source says.

The Democrats in the chamber, including Rep. Deb Butler—who represents the state’s 18th district—immediately objected to House Speaker Tim Moore’s (R) motion to vote on the bill. Agitated by the surprise move, Butler screamed at Moore and called him a “coward.”

“This is a travesty of the process, and you know it. We will not yield,” Butler said.

The contentious fight over North Carolina’s budget has dragged on for months. Cooper’s original budget included a pay raise for the state’s teachers; $80 million for public schools to hire more health professionals and promote student mental health; and a provision to expand the state’s Medicaid program under Obamacare. Republicans, who control the legislature, instead passed a budget that omitted the Medicaid expansion and included a lower raise for teachers, along with a corporate tax cut. Cooper vetoed the budget in June.

Jackson says Democrats are now attempting to reverse the veto override, but they would need help from Republicans to do so. “It’s been a cluster, as you can imagine,” he says. “You have to have relationships and trust people when they give you their word. You have to trust the other side not to do something crazy. That this happened on 9/11 takes it to a whole other level. It’s a sad day.”