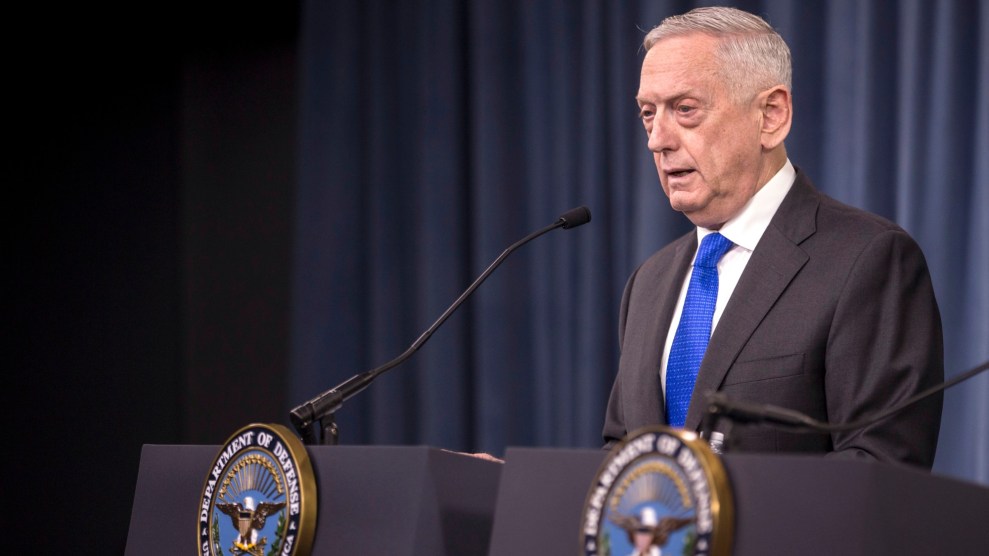 A former aide to Defense Secretary James Mattis is moving forward with the release of a book his publisher has hyped as a “sometimes shocking account” of the Pentagon under President Donald Trump, less than two weeks after he sued the Pentagon over claims that officials delayed its release to help Mattis.

Guy Snodgrass, a retired Navy pilot who served as Mattis’ speechwriter for 17 months, told me that the Pentagon on Wednesday finally cleared his book for publication with only “very, very, very minor” redactions. A letter from the Pentagon, which Snodgrass provided to me, confirmed that his manuscript had been cleared for public release.

The book, Holding the Line: Inside Trump’s Pentagon with Secretary Mattis, was originally scheduled to publish on Halloween, but Snodgrass said he is unsure whether that date will still be met. A spokesperson for Random House, which is publishing the book through its conservative Sentinel imprint, did not immediately respond to a question about the release date.

In a lawsuit filed last month against the Pentagon, Snodgrass accused the department of slow-walking his manuscript’s review process to “benefit” Mattis, whose own memoir, Call Sign Chaos, was released last week. Mattis submitted his resignation as Secretary of Defense in December after objecting to Trump’s decision to withdraw US troops from Syria.

The Defense Department regularly reviews manuscripts by former government officials to ensure no classified information is included, but Snodgrass claimed in an affidavit filed as part of his lawsuit that Pentagon reviewers went beyond their official purview when screening his book. As I reported last week, officials “were particularly concerned with repeated references to the ‘Tank,’ an ornate Pentagon conference room where Mattis met with Trump and other senior government officials.” In emails included as part of Snodgrass’ case, a Pentagon official told Snodgrass that attendees at these meetings with Trump “need to have absolute confidence that their discussions, to include physical reaction and body language, will not be replicated, period.”

Mark Zaid, Snodgrass’ attorney, indicated Monday on Twitter that the Pentagon was planning to complete its review within the week “with minimal redactions.” That process has now apparently concluded, clearing the way for publication.

Random House described the manuscript in promotional materials as a “fly-on-the-wall view” of Mattis during Trump’s tumultuous first months in office. In contrast to Mattis’ book, which avoids directly attacking Trump, the central argument of Snodgrass’ manuscript “will be that Mattis, during his first year at the Pentagon, was able to tame some of Trump’s more damaging instincts,” according to a New York Times article from March, when Snodgrass first announced the project. The summary of his book on Random House’s website describes Trump as “a President whose actions were frequently unpredictable and impulsive with far-reaching consequences.”

Mattis is portrayed flatteringly in the promotional materials—the Random House blurb calls him “the administration’s ‘adult in the room.'” But Mattis has been reluctant to criticize Trump since leaving his Cabinet, sparking criticism of the revered Marine Corps general during his much-publicized book tour last week. When Snodgrass emailed him in March to let him know the book was set to be announced, Mattis scolded his former aide for breaking his confidence. “I regret that you appear to be violating the trust that permitted you as a member of my staff to be in my private meetings,” he wrote, according to an exchange Snodgrass later released as part of his lawsuit.

The former official added, “Unfortunately, he assumed a level of importance to his role that neither his responsibilities, position, nor rank afforded him.”