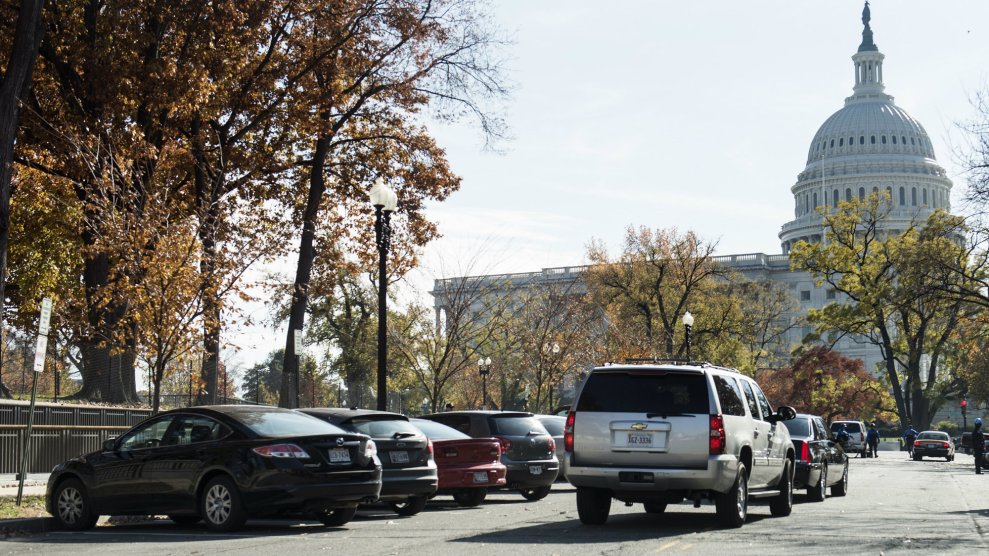 When Congress held a hearing Thursday on the possibility of statehood for Washington, DC, Republicans came prepared with all the usual arguments for why district residents shouldn’t be represented in the US House and Senate. DC statehood might violate the Constitution, they claimed. DC wouldn’t be able to support itself financially, they worried. But Rep. Thomas Massie (R-Ky.) had a novel concern: Adding a 51st state might make it harder for his staff to park their cars.

“Some of my staff actually park out where the new state would be.”

Like other Republicans on the House committee that oversees DC, Massie suggested that the continued disenfranchisement of the district’s 700,000 residents was necessary because a hypothetical new state might exert undue pressure on the federal government. To illustrate his point, Massie called attention to the proposed map for the state of DC that would be established by HR 51, a bill introduced by DC’s non-voting delegate to Congress, Eleanor Holmes Norton. Under the bill, a small enclave—essentially the National Mall, the White House, the Capitol, and various government buildings—would remain under federal control. According to Massie, the size of this enclave would somehow enable the DC government, which would likely be dominated by Democrats, to “influence” Hill staffers through its control of parking spaces.

“What strikes me is how small this enclave is proposed to be,” Massie said to Kenneth Thomas, an attorney with the Congressional Research Service, who was testifying about legal issues related to statehood. “Where do you park?”

“I take the Metro,” Thomas responded to laughter.

Undaunted, Massie continued. “Some of my staff actually park out where the new state would be,” he said, grinning. “So, what’s proposed…a lot of Capitol Hill staff would be parking outside of the federal enclave. Doesn’t it seem like there would be some influence if the congressional staff had to appeal to the new state to park?”

“I agree that if there’s a parking issue, that certainly could impact some staff members,” Thomas said.

Stacey Plaskett, the Virgin Islands’ House delegate, later expressed incredulousness that concerns about parking could be more important than the voting rights of 700,000 residents. “That’s flabbergasting to me,” she said.

Massie’s complaint wasn’t the only far-fetched argument against statehood made by Republicans Thursday. At the start of the hearing, Rep. Jim Jordan (R-Ohio) moved to subpoena embattled DC Councilmember Jack Evans, who is currently under federal investigation over allegations that he used his government positions to court clients for his consulting firm. Jordan suggested that DC’s history of political corruption means it isn’t fit to be a state.

Norton, who ran the hearing in place of committee chair Elijah Cummings (D-Md.), fired back at Jordan, reminding him that his own state has a rich history of political scandals. “But no one is suggesting that Ohio ought to lose its status,” she said.