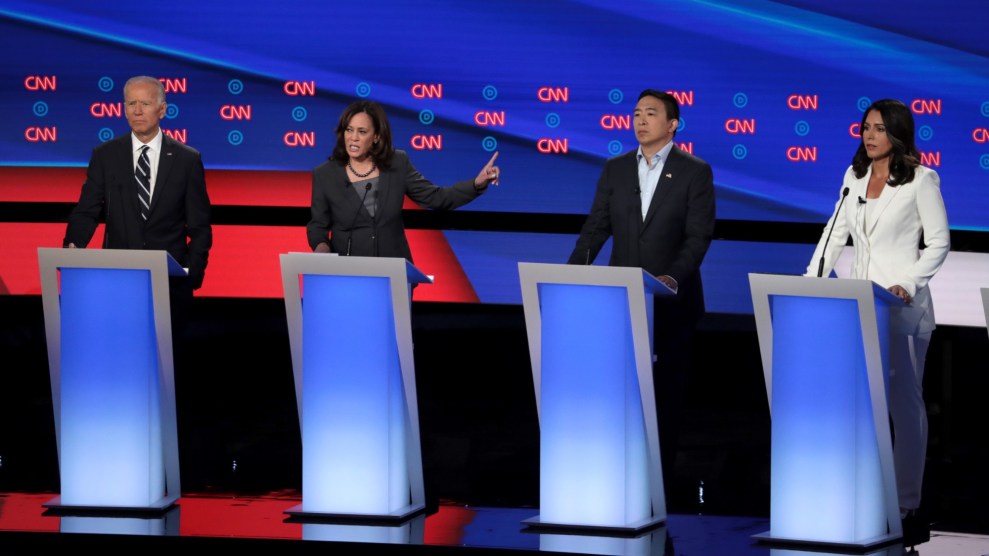 Retreat is not a concept Americans take lightly, whether in wartime or during CNN’s climate town hall Wednesday night. There the topic was managed retreat or strategic retreat, a deliberate pulling back from coastal areas. It means giving up some buildings and infrastructure to the rising sea while moving others. It’s also a strategy that scientists frequently turn to when debating how waterfront cities and towns will adapt to climate change.

But when moderators and audience members asked the Democratic hopefuls whether they’d relocate people away from coastal areas prone to flooding, the candidates called it virtually everything other than retreat. To wit (emphasis added by me):

Andrew Yang: “We would 100 percent make funds available to communities around the country for adaptation and resilience.”

Amy Klobuchar: “I’ve been through this mitigation issue for flooding in my own state … sometimes we find a way to move their homes, to move them off flooding areas that keep consistently flooding, because otherwise they’re paying too much money.”

Joe Biden: “We have to be in a position where we build back, we don’t build back to normal, we build back to what is necessary. So there’s a whole range of things going on now, in terms of—anyway I’m taking too long, sorry.” (Perhaps he was close to uttering “retreat”? Weird way to trail off in a town hall, regardless.)

Bernie Sanders: “I don’t think it makes a lot of sense to rebuild that house so it is knocked down again in the next storm.”

Beto O’Rourke: “Let’s as Americans invest in the people of Houston and the southeast of America and every community that’s on the front lines of climate change to rebuild where we can and to move where we must.”

Retreat? No thank you. This is America—we’ll rebuild in coastal areas that keep flooding rather than use a word that signals weakness. Even as sea levels creep higher, and as climate change supercharges hurricanes, we rebuild. (Following Harvey’s ravaging of Houston, some homeowners have opted to raise their domiciles, the average cost being between $100,000 and $300,000.) Even as we stand to lose 300,000 homes worth $120 billion by 2045, we rebuild. We’re not even advancing in a different direction, as the major general once put it. Hell, even Californians, who’ve been carrying the nation’s environmental flag for decades, refuse to give up coastal land. Retreat is not an option, especially not if you’re a politician.

The semantics are quite different in Canada, which is also facing a growing threat from intense floods. But the government and insurance companies are calling the solution what it is. “The actual term is strategic retreat,” says Blair Feltmate, head of the Intact Centre on Climate Adaptation at the University of Waterloo in Canada. “I get it, that the various Democratic candidates are trying to avoid usage of these terms. People see it as capitulation: In other words, you’re kind of just giving in to climate change.”

Which, of course, it’s not. If a volcano opened up in your backyard, would you keep rebuilding after each lava flow? The same thing goes with climate change: Seas will continue to rise, and homes too close to the shore will continue to flood. The government has to step in to support those who are displaced, just as the Canadian government is beginning to pay people to abandon their homes and retreat.

To the Democrats’ credit, they’re talking about the right issue. But there’s danger in relying only on euphemisms, because “retreat” and “retreat” alone conveys the urgency of the threat. You wouldn’t order troops to merely “move where we must” while a massive, unstoppable army barrels down upon them. But while politicians work up the courage to utter that dreaded seven-letter word, they can take a page from Major General Smith and urge oceanfront communities to start advancing in another direction—inland and uphill.