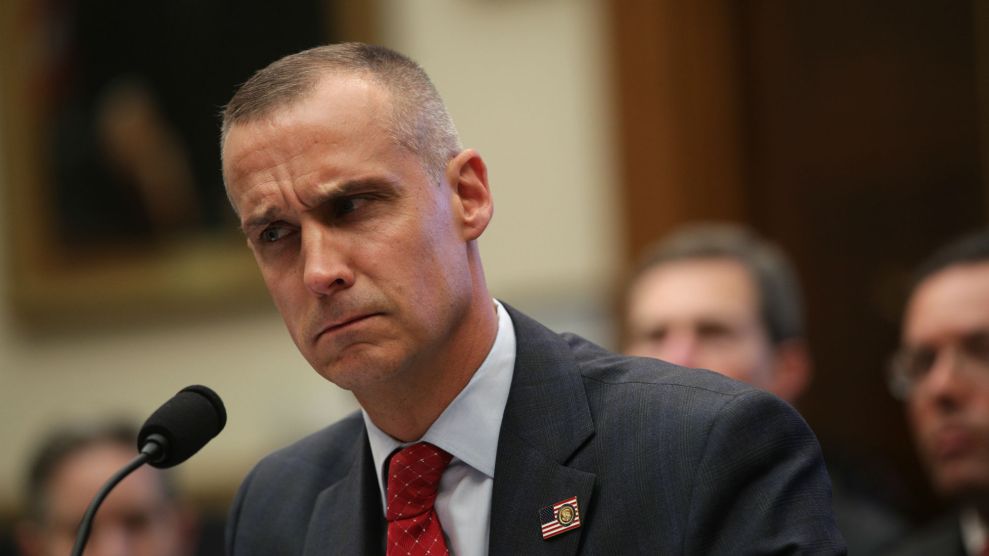 Halfway through the fourth hour of Corey Lewandowski’s testimony before the House Judiciary Committee last week, Rep. Madeleine Dean (D-Pa.) asked the former Trump campaign manager about his work since the 2016 election. By and large, that work appears to have entailed selling his perceived access to President Donald Trump.

“It was very important that you maintain a good relationship with the president.”

“It was very important that you maintain a good relationship with the president because, after you left the Trump campaign in December 2016, you co-founded Avenue Strategies,” Dean said, referring to a lobbying shop Lewandowski worked for until May 2017. “Isn’t that right?”

“Yes, it is,” responded Lewandowski, who has said he may run for the GOP nomination to take on New Hampshire Sen. Jeanne Shaheen (D) in 2020.

Dean was the first lawmaker at the hearing to note that Lewandowski’s day job made it hard for him to rebuff Trump’s request. “You had access to him that others didn’t,” she said. “It was important to you, wasn’t it?”

Lewandowski replied, unconvincingly, that access was not important to him. But the exchange highlighted a connection between Trump’s efforts to impede Mueller’s investigation and the sale of influence by Trump insiders in Washington. In exchange for access, Trump wants favors.

Lewandowski denies that he has acted as a lobbyist. He has even denied cashing in on his connection to Trump. He has refused to detail his work for corporate and foreign clients, and he says he won’t reveal his “private business” if he runs for office.

But Dean’s questions, along with Lewandowski’s potential Senate bid, are prompting new scrutiny of what critics call his shadow lobbying career. Trump has indicated support for a Lewandowski run and exchanged encouraging tweets with him during the hearing. For their part, New Hampshire Democrats have started attacking Lewandowski as a swamp creature.

“Corey Lewandowski has spent every minute since the 2016 election selling White House access to the highest bidders and most nefarious clients imaginable, from predatory lenders to big oil and even foreign interests,” said Josh Marcus-Blank, a spokesman for New Hampshire Democrats.

Media reports have already revealed that the former Trump aide has distinguished himself for the brazenness with which he has reportedly touted his ability to access and influence Trump. Without registering as a lobbyist, he has associated himself with lobbying firms and created the impression that by hiring them, clients will benefit from his ties to Trump. He won’t say how much he earned this way, but he is not working pro bono. Along the way, he has advised firms ranging from T-Mobile—which was seeking help winning approval for its proposed merger with Sprint—to Elio Motors, which sells a three-wheeled “autocycle.” He’s met with foreign leaders from the Balkans, Poland, and elsewhere. And he’s done all this while dismissing reports that he is selling influence as fake news.

Lewandowski formed Avenue Strategies during the presidential transition period. In December 2016, he traveled to Mexico City. Media reports credited him with setting up a private meeting with Trump for Mexican billionaire Carlos Slim. Lewandowski claimed the firm was not auditioning to represent Slim, but Lewandowski’s partner at Avenue, Barry Bennett, has said the company was indeed interested in signing Slim as a client.

In early 2017, another company founded by Lewandowski and Bennett told foreign leaders in written pitches that it could arrange meetings with Trump, Vice President Mike Pence, and other “key members” of the administration. Lewandowksi, while seeking business, reportedly told Azerbaijan’s ambassador that he could arrange for that country’s notoriously corrupt and autocratic president to meet with Trump.

The New York Times reported in 2017 that Lewandowski told potential clients that he could help corporate clients avoid being attacked by Trump on Twitter. At Tuesdays hearing, Lewandowski denied a 2017 Buzzfeed report that he had told Facebook and the Blackstone Group that he had access to Trump’s Twitter account. (During the same hearing, Lewandowski also admitted to lying to the media.)

Lewandowski says he won’t reveal his “private business” if he runs for office.

After leaving Avenue amid bad press and an acrimonious split with his partners, Lewandowski agreed to represent a payday lender called Community Choice Financial. While working for that firm, he made a July 2017 appearance on NBC’s Meet the Press, during which he urged Trump to fire the head of the Consumer Financial Protection Bureau, Richard Cordray, who supported new regulations on payday lenders. On the show, Lewandowski falsely claimed that this unprompted suggestion did not reflect “any business interests.” He did not deny these facts at the hearing, but he did dispute a GQ report that, as part of his effort to convince the company to hire him, he had had promised he could get Cordray fired. Under pressure to quit, Cordray left the agency in late 2017 to run unsuccessfully for governor of Ohio. After his departure, the agency quickly rolled backed restrictions on payday lenders.

Lewandowski reportedly began working in mid-2017 with Turnberry Solutions, a firm run by former Trump aides and named after a Trump-owned golf resort in Scotland. (Last week, the House Oversight Committee revealed that the Air Force has spent $184,000 at the resort during Trump’s presidency.) In 2017 and 2018, Lewandowski consistently denied any financial connection to the firm, despite living in a townhouse where the company is headquartered; reportedly joining the firm’s lobbyists on business calls; and traveling with registered lobbyists for the firm to locations including Poland and Serbia, where they met with lawmakers. Lewandowski reportedly helped another firm, BGR, sign a group of Polish defense contractor as clients.

In the summer of 2018, two Turnberry lobbyists agreed to represent a political party from Rebublika Srpska, a Serbian enclave in Bosnia. When the party’s prime minister visited the United States, she met with Lewandowski in Trump’s Washington hotel and later issued a press release showing them together. Osborne, who calls Lewandowski a “close friend,” told Mother Jones that meeting was unplanned.

In February, Lewandowski officially joined Turnberry as an adviser. That gave him a formal tie to clients, including the Houston-based American Ethane Company. American Ethane wanted members of Congress to help pressure a Chinese textile giant, the Nanshan Group, to fulfill a deal it appeared to agree to in 2017 to buy $26 billion worth of ethane from the company over 20 years. American Ethane is owned by two Russian billionaires. One of them, Konstantin Nikolaev, was revealed by the Washington Post last year to have funded efforts by Maria Butina, a founder of a Russian pro-gun group, to cultivate ties to prominent Republicans and National Rifle Association officials. Butina pleaded guilty last year to acting as unregistered agent for Russia. Osborne told Mother Jones that Turnberry’s work had nothing to do with Butina or Russia.

Lewandowski’s work for such companies does not appear have have hurt his standing at the White House. “The president respects loyalty, and Corey has been extremely loyal to him through thick and thin,” Chris Ruddy, a Trump friend and adviser, told the New York Times in 2017. “As long as that continues to be the case, the president is going to be supportive of Corey.”