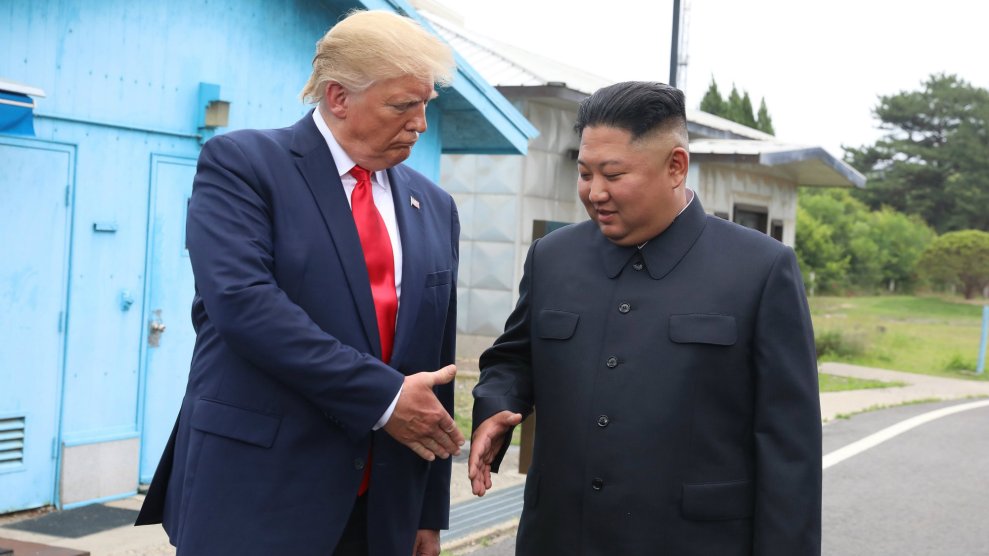 Instead, President Donald Trump took to Twitter to praise North Korean dictator Kim Jong Un’s “great and beautiful vision for his country” and to suggest that Trump could help “make that vision come true.”

….Chariman Kim has a great and beautiful vision for his country, and only the United States, with me as President, can make that vision come true. He will do the right thing because he is far too smart not to, and he does not want to disappoint his friend, President Trump!

Here’s a reminder, from the State Department annual human rights report, of what Kim’s vision has meant for North Koreans—including murders and disappearances perpetrated by the government, nightmarish political prison camps, and coerced abortions:

Unlawful or arbitrary killings by the government; forced disappearances by the government; torture by authorities; arbitrary detentions by security forces; detention centers, including political prison camps in which conditions were often harsh and life threatening; political prisoners; rigid controls over many aspects of citizen’s lives, including arbitrary interference with privacy; censorship, and site blocking; substantial interference with the rights of peaceful assembly and freedom of association; severe restrictions of religious freedom; significant restrictions on freedom of movement; restrictions on political participation; coerced abortion; trafficking in persons; severe restrictions on worker rights, including denial of the right to organize independent unions, and domestic forced labor through mass mobilizations and as a part of the re-education system.

In his pursuit of a nuclear deal with North Korea, Trump seems to no longer care about human rights. After he denounced Kim’s “cruel dictatorship” as recently as last year, Trump now lathers on praise for a man who ordered the killings of his own brother and uncle. At a September rally in West Virginia, Trump told attendees that he and Kim “fell in love” after Kim sent him “beautiful letters.” Their burgeoning bromance dates back to last June, when at a summit in Singapore, Trump and Kim signed a document committing themselves to the “complete denuclearization of the Korean peninsula.”

The summit energized a diplomatic relationship that had long gone sour, but little about North Korea’s behavior, before or since, has suggested it will give up its nuclear weapons. In January, the US intelligence community assessed that North Korea is “unlikely to give up all of its WMD stockpiles, delivery systems, and production capabilities.” A month later, Trump’s second summit with Kim in Hanoi fell apart after the United States rejected North Korea’s request for partial sanctions relief in exchange for incremental steps toward shuttering its nuclear program.

In May, North Korea launched a set of short-range missiles in violation of a United Nations ban on testing ballistic missiles. The move did not violate Kim’s pledge last year not to test nukes or intercontinental ballistic missiles, but it was still a diplomatic slap in the face given Trump’s boasts about halting the country’s missile tests. It was also a direct threat to South Korea. “It’s no accident that following the July 25 test, the North Korean official statement clearly emphasized that these launches should be understood as a warning to South Korea, not to the United States,” North Korea expert Andrei Lankov wrote for NK News, a Seoul-based news outlet.

Trump nevertheless defended Kim at the time. “Anything in this very interesting world is possible, but I believe that Kim Jong Un fully realizes the great economic potential of North Korea,” the US president wrote, on Twitter. “He also knows that I am with him & does not want to break his promise to me.”

North Korea’s latest missile test and Trump’s rush to praise Kim show how that paradigm hasn’t changed. Acknowledging North Korean misbehavior would contradict Trump’s efforts to portray himself as an unparalleled deal-maker who has successfully negotiated with a dangerous threat to US security. So North Korea can violate UN protocols, repress its own citizens, and lie flagrantly—and Kim can still count on vocal support from the White House. Kim, Trump assured the world on Friday, “will do the right thing because he is far too smart not to, and he does not want to disappoint his friend, President Trump!”