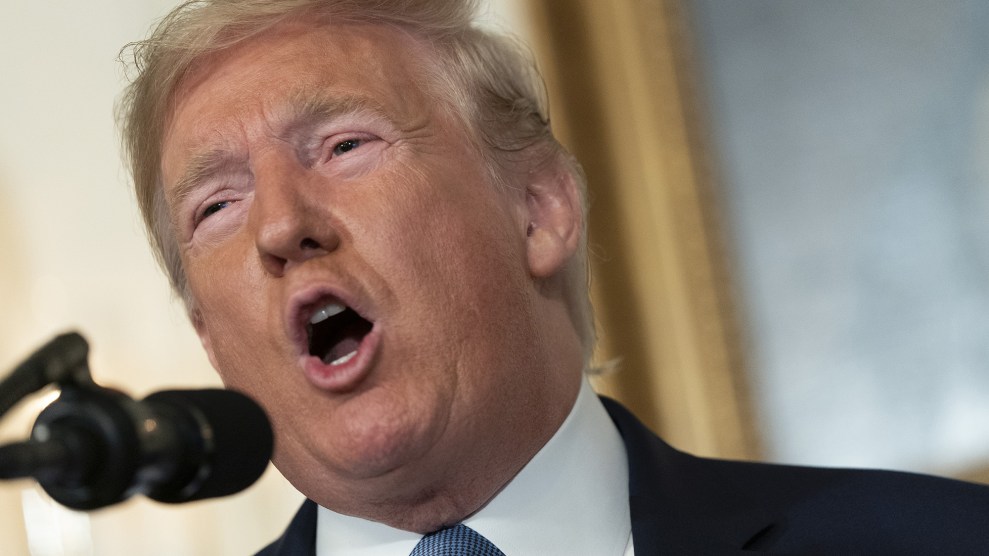 During an address to the nation on the Monday morning following a weekend in which two mass shootings in the United States left 31 people dead, President Donald Trump deflected the blame for the massacres away from firearm access, saying, “Mental illness and hatred pulls the trigger, not the gun.”

But despite voicing concerns about mental illness, Trump has taken repeated action during his presidency to restrict Americans’ access to health care, including mental health care.

Trump has been a long-time critic of the Affordable Care Act, most recently supporting a lawsuit that aims to strike down the ACA entirely. As Edwin Park, a research professor at the Georgetown University McCourt School of Public Policy, explains, the ACA requires insurers to cover mental health care and bars them from discriminating against individuals with pre-existing conditions, including mental illness.

“The research is very clear that the ACA significantly increased coverage, which in turn increased access to behavioral health treatment, mental health services, treatment for addition, that have all resulted in improved mental health for individuals who gained coverage,” Park said. “If you take that coverage away, certainly that would be a huge negative impact on mental health in the United States.”

Donald Trump sounded the alarm about mental health issues in the wake of this weekend's shootings—but he declared that the availability of firearms was not responsible for the massacres.

Prior to the ACA, popularly known as Obamacare, insurance companies didn’t necessarily have to pay for mental health coverage, and, as a result, 18 percent of people enrolled in private plans didn’t have mental health benefits. The ACA included mental health as one of the 10 “essential benefits” that must be included in all insurance plans sold on the individual or small-group markets. But through the lawsuit and the bills that Republican lawmakers tried to pass in 2017, Trump has spent his presidency trying to erase those essential benefits.

“The Trump administration has worked to roll back the ACA and insurance regulation, moving in the direction of less coverage of mental health, not more,” Larry Levitt, the executive vice president for health policy at the Kaiser Family Foundation, said via email. “The administration is arguing in court that the entire ACA should be overturned, including the expansion of Medicaid and benefit requirements, including for mental health.”

The Trump administration has already diminished access to mental health care by expanding the duration of short-term health plans, so-called “junk insurance” plans that do not have to comply with the ACA and typically don’t include coverage for mental health. “People get stuck in these plans, and if they have a behavioral health issue, they’re gonna likely go without needed care,” Park said.

The connection between mental illness and mass shootings, it should be noted, is weak. Even though research has shown that gun control reduces firearm-related deaths, the United States—which has had more mass shootings than any other country—has failed to pass comprehensive gun control measures. Recent mass shootings have been motivated by racism, anti-Semitism, and anti-immigrant sentiments. But if we were to accept the specious notion that unchecked mental illness was solely responsible for the epidemic of mass shootings in the US, Trump’s efforts to restrict Americans’ access to mental health care would have done more to contribute to the problem than to solve it.

“His general approach is to make it harder for people to access health coverage,” Park said. “As a result, that would make it more difficult to access needed care for behavioral health issues.”