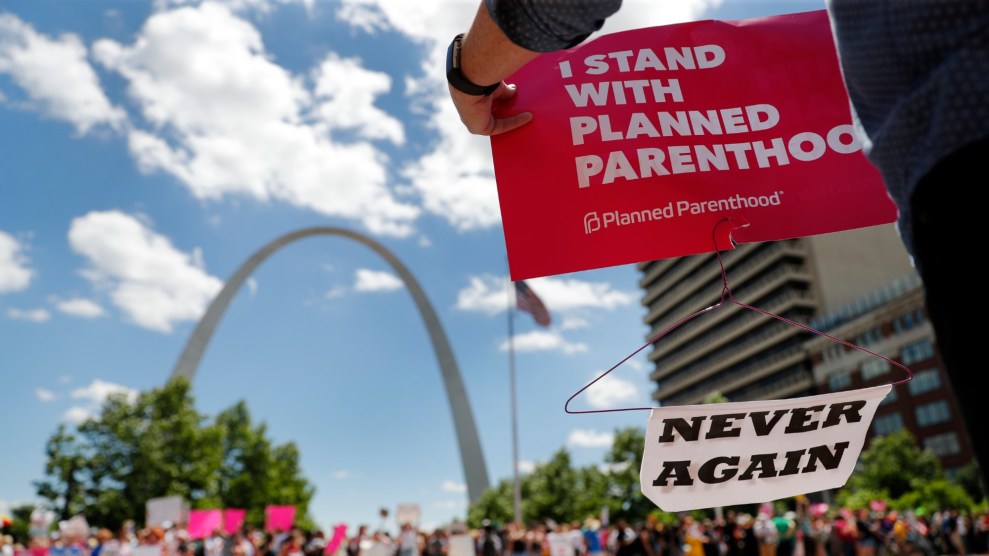 Abortion rights supporters stand on both sides of a street near the Gateway Arch as they take part in a protest in favor of reproductive rights on May 30, 2019, in St. Louis.Jeff Roberson/AP

Late last month, Emma Bosley and dozens of Planned Parenthood volunteers and staff members descended on Capitol Hill to plead their case to lawmakers. When I met the 29-year-old systems analyst from Washington state, we huddled in a shaded area on the grounds of Congress to escape the sweltering sun, and Bosley was revved up. She had just finished talking to lawmakers about how a federal program designed to help low-income women had, seven years earlier, allowed her to get treated at Planned Parenthood, where, despite her lack of health insurance, she got care that solved a debilitating pain condition that had thrown her life off track.

Two years ago, while volunteering for Planned Parenthood in her hometown of Vancouver, Washington, the organization asked if she would share her story with a national audience. Since then, Bosley has spoken to politicians, activists, and organizers around the country about the years she spent searching for answers about a medical condition that doctors later discovered was endometriosis, a disorder that causes intense pain during and between menstruation cycles. Bosley’s troubles, like many Americans struggling with chronic pain, did not end after a diagnosis. At the age of 22, she became uninsured. With nowhere else to turn she went to her local Planned Parenthood, where she could afford care under a federal program known as Title X, which provides reproductive health coverage to more than 4 million low-income women.

The Title X Family Planning program has been around since 1970, and as the government describes it, it’s “designed to provide access to contraceptive services, supplies, and information to all who want and need them.” But those services, and information on reproductive care, soon won’t include abortion. Earlier this year, the Trump administration announced a “domestic gag rule” that will block Title X grantees and facilities—which can include state and local health departments, health clinics, universities, and organizations like Planned Parenthood—from performing or referring patients for abortions.

“If it weren’t for Title X, I honestly don’t know where I would be.”

The federal government spent a little over $286 million on Title X nationwide last year, and while that figure isn’t large in the context of the several-trillion-dollar federal budget, the funds represent a huge portion of a health clinics’ budget; the lone abortion provider in Maine says that 30–40 percent of its budget came from Title X funds. The Trump administration has given family planning organizations a deadline of August 19 to comply with the new regulations. Nearly two dozen states and several nonprofits, including Planned Parenthood, have sued the Trump administration over this policy, but in June a federal appeals court judge ruled that the government could begin enforcing the gag rule.

In response to Trump’s decision, Planned Parenthood, which currently serves 41 percent of all Title X patients nationwide, has declined the program’s funding. For now the organization is still serving Title X patients through emergency funds, but it says it can’t continue to provide the same discounted service forever. The new rule is expected to cut up to $60 million from Planned Parenthood’s operating budget. “If,” Planned Parenthood said in a call to action against the gag rule, “Trump wanted to roll back access to birth control and sexual and reproductive care—which he’s made clear time and time again—then launching an all-out attack on the nation’s Title X program is a surefire way to do that.”

Like many women with endometriosis, Bosley was very young when her health problems started. When she was 15 years old she “started having chronic pain, fatigue, and heavy periods,” she recalls. Doctors prescribed painkillers, including Vicodin and Percocet, to deal with the agonizing pain she felt during her period and recommended different types of birth control, none of which fixed the problem. Even with medication, the pain was too great and she was forced to miss early morning classes enough times that she could only graduate high school after getting a note from her doctor explaining her circumstances.

She bounced between doctors without getting a diagnosis—one doctor even told her it was just “psychosomatic” and suggested a psychiatrist would be a better treatment option—until finally getting an answer almost seven years later. She had endometriosis, and polycystic ovarian syndrome—a hormonal disorder, which can result in irregular periods, infertility, and metabolic conditions. She was told by her doctor that she had three options for treatment for her endometriosis: be induced into early menopause, have a child right then to stop her periods, or have a hysterectomy.

Just a week after figuring out the cause of her pain, Bosley lost the military health insurance she’d been receiving through her stepfather because she turned 22 and was no longer enrolled in school, having already completed her studies at a local community college. At the time she lost her health insurance, Bosley was working at a Starbucks kiosk in a Safeway making a minimum wage salary. “I didn’t know what to do,” Bosley says.

She ended up turning to the only place she could think of, Planned Parenthood. She had heard they might be able to provide discounted care, but other than that she wasn’t sure what to expect. “I was nervous because I couldn’t afford anything,” Bosley says. “I was just talking to the staff at the front and they said don’t worry just fill this out. I’m going to take care of you, and they did.”

While she didn’t know it at the time, Bosley qualified for Title X and was eligible to get all of her treatment covered. Not only was her visit covered, the doctors at Planned Parenthood also gave her a fourth option to treat her endometriosis: taking Depo-Provera, an injectable birth-control shot, which was also covered by Title X.

“If it weren’t for Title X, I honestly don’t know where I would be,” she says, tearing up as we speak by the Capitol building.

Today, Bosley tells me she is healthy and thriving. In 2017, she graduated from Oregon State University with a degree in psychology and is working as a business systems analyst for a veterinary hospital. While she no longer receives most of her care through Planned Parenthood, she says that when she and her husband do decide to have kids, she plans to return to Planned Parenthood. Bosley credits much of her happiness to the care she received at Planned Parenthood and to Title X.

But someone else in her shoes may face a very different landscape due to changes imposed by Trump. Title X is the only federal program focused entirely on providing low-income Americans with reproductive health services—including physical exams, prescriptions, lab tests, counseling, and contraceptive care. The program works by giving grants to a network of grantees, which spread funding out to roughly 4,000 health providers across the country.

Title X patients are not required to apply for the program. Instead, when they receive care at Title X facilities they pay on a sliding scale; individuals with incomes at or below the poverty line paying nothing for reproductive health services, and those with incomes between 100 and 250 percent of the federal poverty level are charged on a needs-based scale. Roughly 60 percent of women who use Title X facilities say it’s their only source of health care. Planned Parenthood has been using emergency funds to cover Title X patients but can’t say how long that’s sustainable and warns that for the 1.6 million people who visit the organization under the federal program, “the gag rule leaves their health, rights, and lives hanging in the balance.” Millions of women may no longer have access to their preferred health care provider, and for those living in rural areas, jumping to another provider may not be an option.

The gag rule will have broad implications for more than just people served by clinics that cover Title X patients. The Guttmacher Institute, a policy group focused on sexual and reproductive health, found that in 2014 contraceptive care funded by the program prevented 1 million unintended pregnancies. For every dollar spent on Title X, the government saves roughly $7 in Medicaid spending. For the nearly half of all Title X patients who rely on Planned Parenthood for health care, their future looks much bleaker than it did last year.