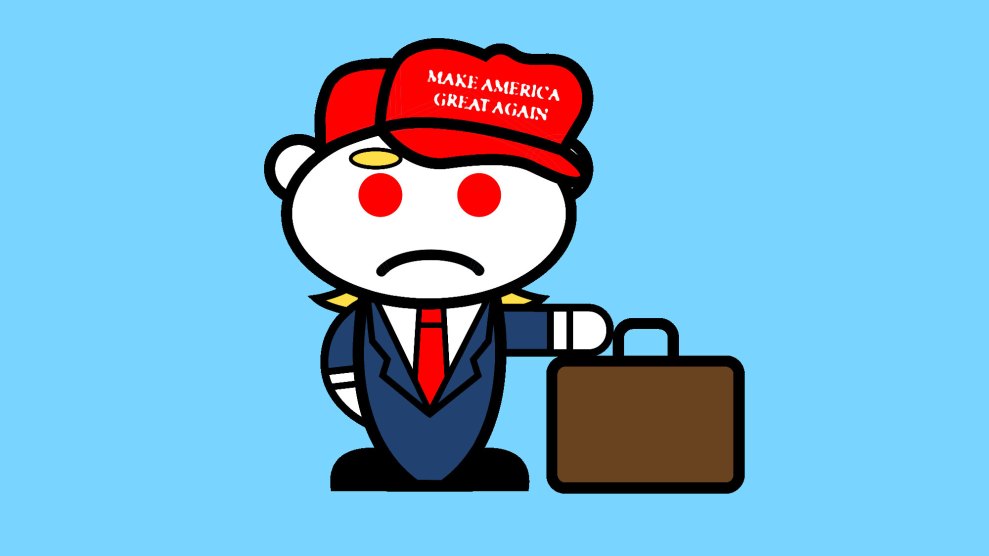 For years, Reddit had hesitated to take action against one of its most prominent toxic communities: r/The_Donald, which in addition to being the site’s fan club for supporters of President Trump, has become a noxious hotbed of hate speech and bigotry. That finally changed on June 26 when Reddit “quarantined” r/The_Donald message board, making it harder for some users to access its content. Reddit quarantines often end in bans, and The_Donald’s users are trying to figure out where to they might go if the company shuts them down.

Public agreement has been hard to come by. In Reddit threads and in their group on Telegram, an encrypted messaging app, The_Donald members have weighed potential new homes on obscure “free speech platforms” and found the options lacking.

The subreddit offers a distilled version of the president’s most toxic supporters.

If The_Donald disappears from the internet, or is forced to regroup on a more isolated platform, the change could have an effect far beyond the subreddit, or even Reddit as a whole. The community is very active, with over 774,000 members, and it boasts that memes created for or spread on the board have been reposted by President Trump and his son Donald Trump Jr. As perhaps the closest thing the online Trump political universe has to a hub, the subreddit offers a distilled version of the president’s most toxic, troll-prone supporters, whose habits of regularly posting noxious, violent, and racist content ended up earning the board its quarantine. This spring, The_Donald users posted bigoted content condoning violence against Muslims following the Christchurch shootings, and, during a GOP walkout from Oregon’s state senate, again advocated for violence.

The subreddit has also served as a prominent stepping stone on the path to radicalization for right-wing white nationalists. The news investigations site Bellingcat has documented how budding white nationalists spent time on The_Donald before being “redpilled” into extremism and joining far-right conversations elsewhere. Being knocked off Reddit could help stifle The_Donald’s role as a major pipeline to such radical communities.

Finding a new home for The_Donald is difficult because no other platform has everything its Reddit users have come to expect, and think the community needs to thrive. Users objected to Telegram’s requirement they provide the company their phone number while signing up. And while the chat service’s lax content policies make it unlikely to interfere with the group, carrying on organized conversation among large numbers of people would be impractical there. “This isn’t going to hold 700k pedes,” one user wrote in The_Donald Telegram (“‘pedes” is short for “centipedes,” a nickname for Reddit Trump supporters), as an influx of members joined the service following the Reddit quarantine. ”We need to rework the format.”

While Voat, launched in 2014 as a Reddit clone, and Gab, a microposting service mimicking Twitter, routinely allow hateful content and are both better suited to handle thousands of users, their niche bases limit their ability to shape more mainstream discourse and draw in new, curious eyes. “Voat is a shithole,” one The_Donald member wrote. “Voat is not a viable alternative unless you want to immerse yourself in a forum where on any given thread about 1/3 of the posts are racial slurs.”

The subreddit’s difficulties illustrate the potential value of deplatforming toxic communities. While technology companies have pointed out that banning hate communities can lead to members migrating elsewhere—and academic research suggests that this is true to a degree—some experts think bans still have a role to play in reducing the impact of hateful communities.

Rishab Nithyanand, a professor at the University of Iowa who has researched far-right extremism on Reddit, has studied how Reddit often applies its policies unevenly, leaving up communities that under the company’s own rules should be removed. He believes actually removing these subreddits would help reduce overall toxicity on the platform.

Nithyanand admitted that banning The_Donald has “the potential to send some user onto a more extreme platform where it’s harder to observe them.”

“One of the benefits of having them on Reddit,” he explained, “is that at least it’s a platform that’s been accessible. Reddit has made data available. The posts stay up for a long time. They’re not hidden away.” That said, Nithyanand emphasized that he was generally in favor of a full ban given the subreddit’s longstanding rules violations.

“Our research, it shows that quarantines aren’t working,” Nithyanand says. “Reddit is just sending a signal action is coming and that a subreddit should be planning its next move.”

“If we get banned and flock to a ‘safe space’ for like minded individuals, then we’ve lost.”

In addition to any such preparations for a ban, The_Donald has begun making substantial efforts to convince Reddit its behavior has improved. With each new post on The_Donald, a bot now automatically adds a notice reminding users that “content that ‘encourages, glorifies, incites, or calls for violence’, or that shares someone’s personal information is not permitted.” The subreddit’s moderators provide a semi-regular “Quarantine Update and Transparency Report” keeping the community up to date on actions administrators have taken because of Reddit rule violations, and again reminding users to not post content that might further violate the platform’s policies. The posts also include updates on a quarantine appeals process The_Donald moderators are pursuing. Reddit rejected the community’s first appeal on July 31, setting a 60 day waiting period before they could try again.

Despite such attempts, many members of The_Donald see a ban as inevitable, and some have long been preparing for the eventuality. In one post from two years ago addressed “TO EVERYONE LOOKING TO ALTERNATIVES IF The_Donald GETS BANNED,” the author warned of the negative consequences to the community’s reach if it were to fall into its “own echo chamber.”

“We NEED to stay on Reddit, Facebook, and Twitter! If we have our own site or forum, we lose our voice to others!” the poster wrote. “It is my personal opinion that if we get banned and flock to a ‘safe space’ for like minded individuals, then we’ve lost. We need to stay behind enemy lines!”

Even though the quarantine may have effectively given the community an opportunity to prepare a landing place, The_Donald doesn’t appear to have settled on an alternative, or at least not in public. But whatever their eventual course, The_Donald can’t overcome the fact that if forced to leave Reddit, whatever platform they move to will be harder to access and have less of a mainstream audience.

Regardless, the group’s supporters will be waiting. “Pedes, follow thedonaldreddit on Twitter,” one user wrote, in a post just after The_Donald was quarantined. “If we get banned, instructions will be posted there.”