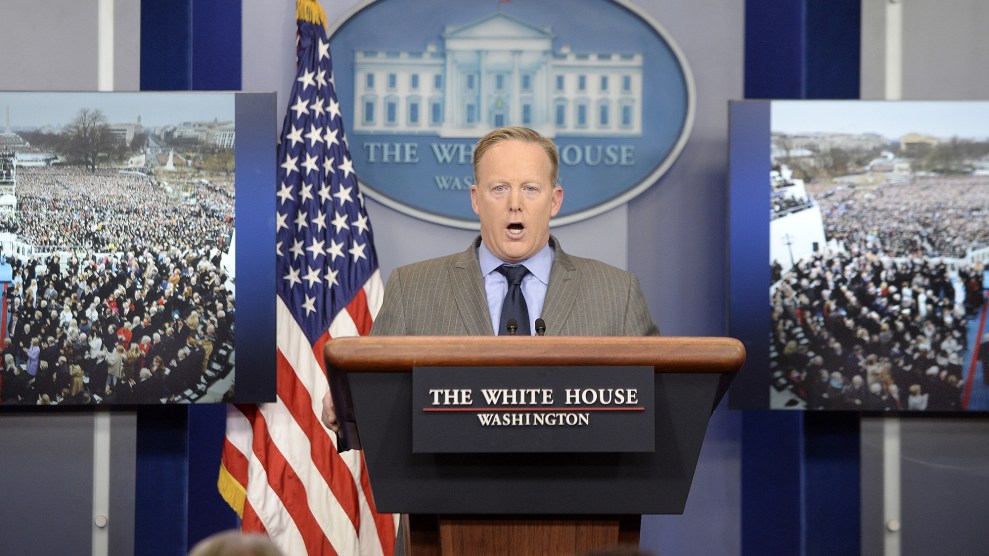 Then–White House press secretary Sean Spicer delivers an angry statement about inaugural crowd size to the press on January 21, 2017, at the White House.livier Douliery/Avalon via ZUMA

In the early 2000s, when Donald Trump’s real estate empire was in shambles and his reputation was downgraded to a punchline, reality television came to the rescue. On NBC’s The Apprentice, a man who had lost more than a billion dollars, according to his tax returns, played the role of the ultimate business success story. After 14 seasons, Trump’s rehabilitation was complete, and he announced his campaign for president.

Following in his old boss’s footsteps, Sean Spicer is preparing for his own star turn as a contestant on the upcoming season of ABC’s Dancing With the Stars. Having tarnished his name under the first reality TV star president, Spicer is seeking to overhaul his image by becoming a reality TV personality himself. He’s one of several people who have exited Trump’s orbit and sought to reinvent themselves through a television series—but for Spicer, it’s most fitting that he would seek out television, since it’s the same medium in which his reputation floundered in the first place. The former press secretary is apparently adopting the president’s theory that attention of any kind is better than no attention at all. (Spicer once promised not to appear on Dancing With the Stars because he is “zero on the rhythm.”)

Spicer’s tenure as press secretary was remarkable even by the standards of that job, held by many a spinmeister. In his first press statement after Trump’s inauguration, he parroted the president’s whopping lie that Trump’s inaugural crowd was the biggest ever. Trump didn’t throw him under the bus; he dutifully crawled beneath it. Many cringe-worthy moments followed. And it all played out on live television.

This was back when the White House held regular press conferences, and since these spectacles attracted large audiences, cable news aired them in full. And Spicer was the hapless star of these Five O’Clock Follies–esque performances.

Spicer has been trying to get back on TV ever since he quit his White House gig. In the fall of 2017, he reportedly turned down an offer to appear on Dancing With the Stars because he hoped to land a more prestigious post as a political commentator on cable news. When that didn’t work out, he filmed a pilot for a talk show that never materialized. In February, he finally signed a contract as a special correspondent for a show called Extra, for which Spicer would interview Trump administration officials as if they were celebrities—bringing the White House reality show full circle. But apparently that didn’t give him the exposure he wanted, so Spicer is doing Dancing With the Stars after all.

Spicer’s attempt at rehabilitating himself—even if it means subjecting himself to the humiliation of dancing in public in costume (just ask Rick Perry)—should not be confused with distancing himself from Trump; Spicer works for a pro-Trump super-PAC, and the president recently appointed him to the US Naval Academy Board of Visitors.

Spicer isn’t the first Trump alum to go the reality TV route. Omarosa Manigault Newman, who became a household name through her appearance on The Apprentice, appeared on Celebrity Big Brother after leaving the White House. So did, very briefly, Anthony Scaramucci, who spent 11 chaotic days as the White House communication director. Last December, Trump campaign adviser George Papadopoulos exited federal prison for lying to the FBI during the Mueller investigation to the reception of a camera crew filming a show about his life. The producer claims it’s a docuseries, not reality TV, which sounds like a technical distinction when we all know it’s the same thing. For Papadopoulos, who’s trying to convert his criminal turn on the Trump campaign into a life of Hollywood glamour, the effect is the same.

Dancing With the Stars is not the only institution to normalize and whitewash Spicer’s reputation. Harvard University controversially rewarded him with a prestigious fellowship. But the revolving door between reality television and the White House is a feature of Trump’s presidency—the road to salvation—as it once was for Trump and for Trump allies whose reputations reached new lows thanks to this presidency.