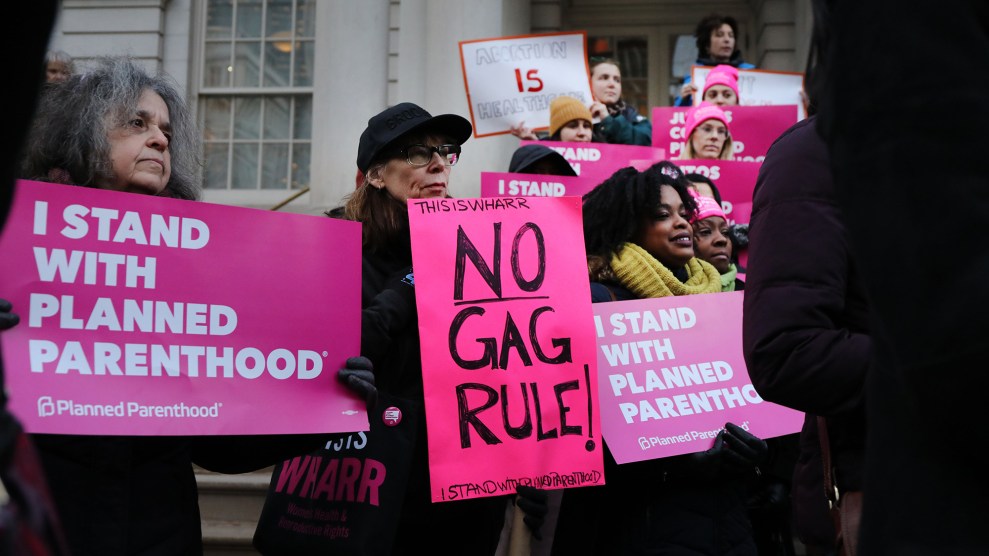 Planned Parenthood announced Monday that it will withdraw from Title X, the federal family planning program through which the organization receives about $60 million annually, rather than adhere to the Trump administration’s new rule that restricts grantees from providing abortion care or referrals for the procedure. Last week, a 9th Circuit court denied the organization’s request to block the rule from going into effect.

“When you have an unethical rule that will limit what providers can tell our patients, it becomes really important that we not agree to be in the program,” Alexis McGill Johnson, acting president of Planned Parenthood, said of the decision.

The new rule was proposed by the Trump administration late last year, and it is widely viewed as the latest push in the decades-long Republican effort to defund Planned Parenthood. Planned Parenthood has been in the Title X program since its inception and has received more funding than any other grantee. The health provider serves about 40 percent of about 4 million patients under Title X to provide crucial services like pap smears, STI testing, vaccines, and prenatal care. Title X funding is never used to provide abortion care—under the Hyde Amendment, the use of federal funds toward abortion procedures is illegal—and abortion services account for only 3 percent of Planned Parenthood’s medical services anyway. But the new policy may jeopardize access to health care for more than 1.5 million low-income women, many of whom reside in rural areas. In the meantime, Title X funds are being funneled instead toward religious health care providers that push abstinence and natural family planning methods.

“Trump’s administration is trying to force us to keep information from our patients. We refuse to cower to this president. The gag rule is unethical, dangerous,” McGill Johnson said in a statement after the court ruled against Planned Parenthood last week. “The Trump administration is recklessly putting birth control and reproductive health care for millions of people at risk.”

We will do everything we can to make sure Planned Parenthood patients don’t lose care. While the Trump-Pence administration may have given up on you, we never will. #ProtectX https://t.co/jRTYroqL7L

Going forward, Planned Parenthood said it will work to find ways to continue providing care, and several blue states have pledged to look for ways to make up for the lost federal funds. Some Democratic legislators are also looking at legislative options to shore up protection for the organization.