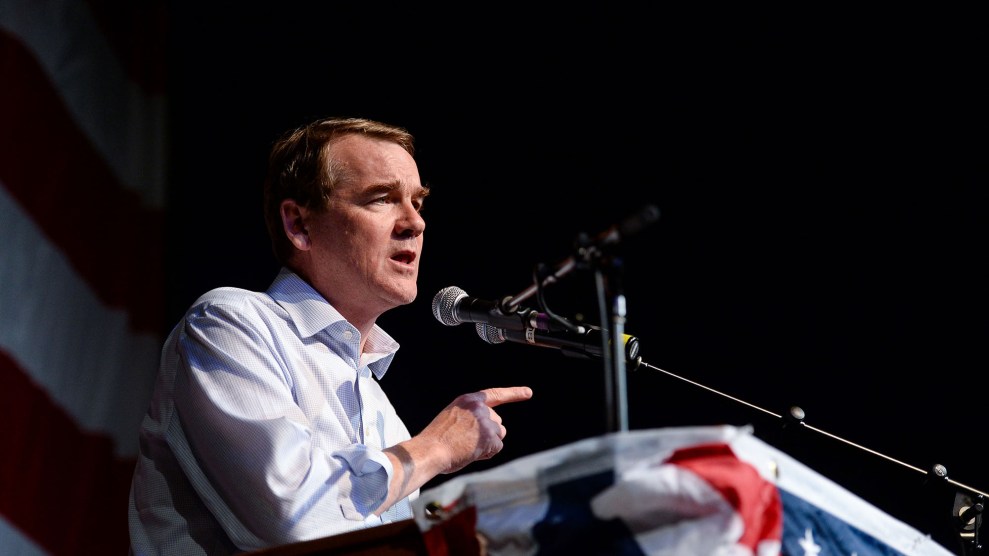 Colorado Sen. Michael Bennet is making Russian election meddling a new focus of his campaign for the 2020 Democratic presidential nomination. On Wednesday he released Dividing America: How Russia Hacked Social Media and Democracy, a book examining attempts to influence the 2016 presidential election by manipulating social media platforms including Facebook, Twitter, and Reddit.

Bennet is using the book to attack Senate Majority Leader Mitch McConnell, who has so far stymied all attempts to pass substantial election security legislation aimed at preventing future foreign election meddling. Such actions have earned McConnell, to his great annoyance, the moniker Moscow Mitch. For his part, Bennet plans to send at least 2,200 copies of his book to McConnell.

While that might put the issue in McConnell’s face, it wouldn’t provide him with much new information. Most of Bennet’s book focuses on analyzing already released content from publicly available archives of Russian memes targeting Americans. Bennet says his goal is to increase public understanding of Russian disinformation and let “the American people know what it really looked like.”

Rep. Eric Swalwell (D-Calif.), who in July became one of the first Democrats to drop out of the race, also made Russian interference central to his campaign. Bennet, whose polling numbers indicate he is unlikely to make the Democratic National Committee’s September debate, hopes to keep the issue in the 2020 spotlight and help force McConnell to finally do something. Should McConnell capitulate, Bennet explained to Mother Jones in a recent telephone conversation, he’s ready to offer some legislative ideas, including enabling new sanctions targeting countries that try to influence the American electoral process by posting memes.

Russian disinformation is well-trodden territory. I’m curious to know why you’re raising this now. What do you feel like is being missed?

I don’t think the American people really have a sense of what the Russian propaganda looked like. I just had a conversation with a guy up in Manchester, New Hampshire the other week. He was a senior at a senior citizens’ home and as I was walking out of the place he said, “Just stop Obama from spending any more money on refugees that should be spent on our veterans.” And that comes straight out of this Russian stuff.

The other issue is that Mitch McConnell has refused to put election security legislation on the floor eight times. The least the Senate majority leader could do is have a vote to allow the senators in the chamber to vote to secure our elections. I suppose they could vote against that if they want to. I would be shocked if anybody did though.

It seems counterintuitive to take this education about these memes offline and put it into a book. It’s harder to get a book—you have to buy it. Why are you doing the analog version?

Anybody who wants to download it from the site can. I did think it would be interesting for people to have an analog version precisely because it’s analog. I think in that format it is isolated from social media. We, for a year, didn’t recognize this propaganda as propaganda. We thought it was just part of our social media feeds. To isolate it and capture it in an analog format, I think is a pretty clear demonstration of what this stuff was.

This disinformation, as you’ve pointed out, targeted tensions between people. A lot of people end up finishing the discussion about it at how we need to be aware of these points of division. Instead of just trying to mitigate Russian posts about racism, people should also try to mitigate racism. How do we address both of those things?

We had a Russian attack on our democracy and we have a president who refuses to take any action. He chose Putin’s word over our intelligence community. He went to Japan and made a joke about this. This is how far we’ve fallen. We have a president who is not holding Russia, and Putin in particular, accountable and he’s inviting it to happen again. That is an issue that I think is separate from the other that you raised. Obviously, I believe very strongly that one of this country’s greatest strengths is our pluralism and we have had a history of fulfilling the promise of that pluralism and a history of failing that promise of that pluralism. I don’t see this effort here as doing anything other than exposing the Russian attack on our society. That’s what this book is about.

But as a candidate and then as president, what does properly addressing those sorts of divisions look like? What does it look like to come up with solutions to make it so you can’t explicitly draw on tensions because there aren’t as many racial injustices?

I’m not sure I understand your question. Can you ask it again?

Yeah, definitely. Russians tried to exploit tensions on things like racial injustice. A way to address that is to deal with underlying racial injustice. Setting aside the memefication of these issues, how do you also want to directly address what’s causing the underlying tension that’s being exploited in the first place?

Well, I think you can draw a straight line from slavery to Jim Crow to redlining in the banking and housing sectors to mass incarceration now that exists in the United States. The fact that we have an education system in America that reinforces income inequality. The fact that African American and Latino households have not recovered the wealth they lost during the great recession. The economic divide is even greater than before. There are many ways I want to address that, starting with ensuring everybody in this country actually had a high-quality education no matter where it was that you grew up. We’re a long, long way from that being a reality and making sure that we account for that long-standing economic inequity that has existed in this country. And the deepest inequities are drawn along racial lines.

I was just down in an area of South Carolina last week or the week before called the “Corridor of Shame,” where not a single kid has taken a high school AP test in probably a generation. Segregation is as steep today as it was 73 years ago when the families of the people I met with down there filed a case that became part of Brown v. Board of Education.

If Mitch McConnell finally comes around, what does legislation look like to fix this?

There are a whole bunch of bipartisan suggestions. An investment in our voting equipment to harden protections from this kind of hacking that the Russians have done is important. I think we’ve got to sanction countries that do this kind of stuff. Russia should be sanctioned for this particular behavior to make sure we’re doing everything we can to deter this kind of behavior by them or anybody else. That is an important thing that we’re not projecting to the world right now. There are other actors beginning to creep into this space and we need to set a strong message. The US needs to lead all democratic efforts in this fight—because the threat to democracy is global, we need to be the ones leading the defense. I put out a long plan today that gives details, requiring paper ballots to stuff related to cyber command and other things.

How do you determine what a proportionate response is in terms of sanctions? It seems difficult to say “All right, Russia did this much misinformation, so we have to sanction them X amount.”

I don’t know why it would be more difficult than any sanctions. You always have to figure out how to modulate them so that they make sense in the context of what you’re trying to deal with. I think we’d be able to figure that out.

I was also curious to know why you focus so much on Russia. Russia was obviously a key disseminator of disinformation in 2016. The researchers I’ve talked to though say this area has evolved a lot, and people are thinking about disinformation from Iran, Israel, and Saudi Arabia and also just private actors.

I agree with that. People have opened up the aperture to look at other possibilities. I think the major attack in 2016 was the Russia attack. And the evidence of that was contained in the book. There’s no reason other than that. I’ve got a full-time job, which might be part of the reason why. I’ve studied the Russia portion, but have spent less time on the other stuff.