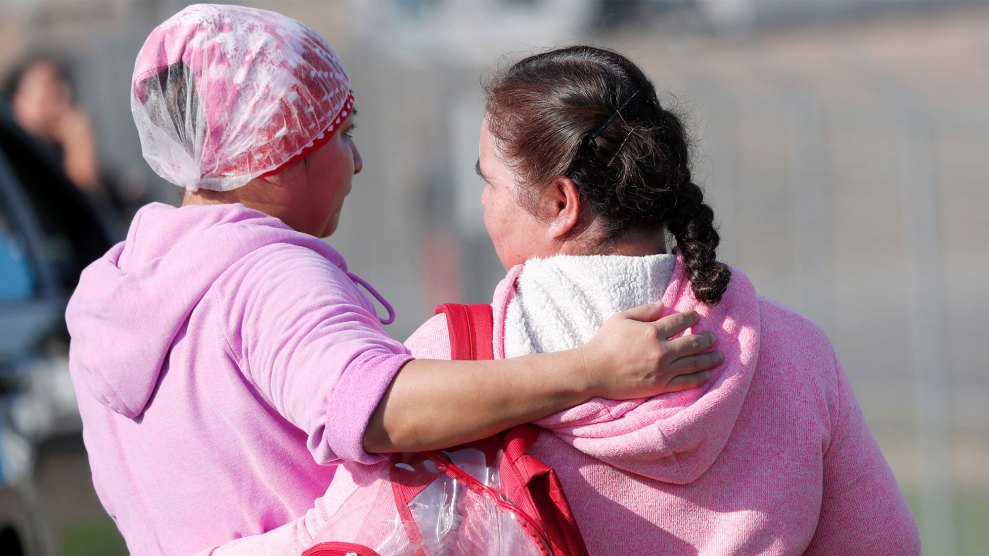 Stephanie Teatro was in her office in Nashville, Tennessee, on Wednesday when the news hit: 680 workers in several Mississippi poultry plants had been detained by Immigration and Customs Enforcement in the largest workplace raid in more than a decade. For Teatro and her colleagues at the Tennessee Immigrant and Refugee Rights Coalition, the images of crying children stuck at school without their parents brought them back to April 2018—when a smaller but similar raid in northeastern Tennessee tore immigrant families apart and threw an entire community into chaos.

“I remember so well the human suffering that something like this causes—it’s incomprehensible,” said Teatro, the TIRRC’s co–executive director. “Immediately people were ready to get in the car and start driving there to go help because we know what it’s like and we know how much support is needed.”

Last year, Teatro’s group was at the center of a similar scene in Morristown, a small city about 40 miles from Knoxville, when ICE arrested 97 men and women from Mexico and Guatemala at the Southeastern Provision meat-processing plant. More than 150 children whose parents were picked up by ICE that day were left in shock. Some teachers rode the bus home with their students out of fear they’d come home to find out that a parent had been detained; that night, families gathered at an elementary school turned resource center to find out where their relatives were held. “Honestly, it felt like we were responding to a natural disaster,” Teatro said. “Kids were crying, and people were desperate for information.” The day after the raid, she added, almost 600 children missed school—and it stayed that way through the week.

“Honestly, it felt like we were responding to a natural disaster.”

The Morristown raid, and similar ICE operations in Ohio two months later, marked a return to the type of workplace targeting that peaked during George W. Bush’s administration. These raids have long been criticized by immigrant rights groups as cruel and unnecessary, and in the wake of the Mississippi arrests, presidential candidate Kamala Harris called them “part of what I believe is this administration’s campaign of terror.”

But what can the affected communities in Mississippi expect in the coming weeks and months, as the media attention dies down and deportation proceedings slowly begin? “The terror and trauma of that day have persisted,” Teatro said, reflecting on what happened in Morristown. “Not only the real threat of deportation, but also some families are reporting that their children are still getting night terrors.”

Separating children from their parents, according to Colleen Kraft, president of the American Academy of Pediatrics, “can disrupt the building of children’s brain architecture. Prolonged exposure to serious stress—known as toxic stress—can lead to lifelong health consequences.” Some Morristown kids who came home to find their mom or dad missing back in 2018 have been struggling with anxiety every time their parent leaves the house, Teatro noted, whether it’s to go to work or to the grocery story.

Teatro, whose organization has put out a toolkit to help communities respond in the case of a large-scale workplace raid, told me that some of the children whose parents were detained in the Tennessee raids ended up staying with relatives who cared for them short-term to prevent child welfare services from taking custody. Most workers spent “weeks and weeks” in immigration detention facilities, she said; 15 of them eventually signed voluntary deportations, and nine were ordered deported by a judge. As of Friday, 71 of the workers picked up that morning in Tennessee were still facing deportation and waiting for their day in immigration court.

“The terror and trauma of that day have persisted.”

In February, seven workers filed a class-action lawsuit against the ICE agents who conducted the raid, accusing them of racial profiling and excessive use of force. They say agents “berated them with racial slurs,” and pointed guns at them, according to court documents. When reached for comment, ICE spokesperson Bryan D. Cox said that the agency “does not comment on pending litigation; that said, absence of comment should in no way be interpreted to think a suit has any merit.”

Some of the workers arrested in Tennessee also have traveled to Washington, DC, to talk to lawmakers about worksite raids and filed complaints with the Department of Labor. Two weeks ago, the owner of Southeastern Provision was sentenced to 18 months in federal prison after pleading guilty to “to tax fraud, wire fraud, and employment of unauthorized illegal aliens,” according to filings by the US Department of Justice. “This reality flatly contradicts statements made by certain persons last year who falsely stated the operation was focused only on workers and not the business itself,” Cox said. (Still, this sort of prosecution is rare: Data from the Transactional Records Access Clearinghouse (TRAC) at Syracuse University shows that in the period from April 2018 to March 2019, more than 120,000 workers were prosecuted for illegal entry or reentry, while only 11 individuals, not companies, in seven cases faced charges for employing them.)

Meanwhile, Teatro said the one good thing that came out of such a traumatic experience was seeing how Morristown, “a pretty conservative town,” showed solidarity for the detained workers and their families. Immigrant rights groups, lawyers, teachers, and neighbors in the rural community came together to help the families affected by the raid immediately after it happened and over the last year—something that’s already happening in Mississippi, too.

According to Nayely Pérez-Huerta, co-director of the Southeast Immigrant Rights Network, many families affected by last week’s raids are in need of donations—but some are still afraid to leave their house. “I called a woman to let her know that she could pick up donations at a church nearby for her and her three children, but she was so terrified she didn’t even want to leave to go to the church,” she said. Still, Pérez-Huerta said, “We’re seeing beautiful solidarity from the non-Latino communities standing with the families affected.”