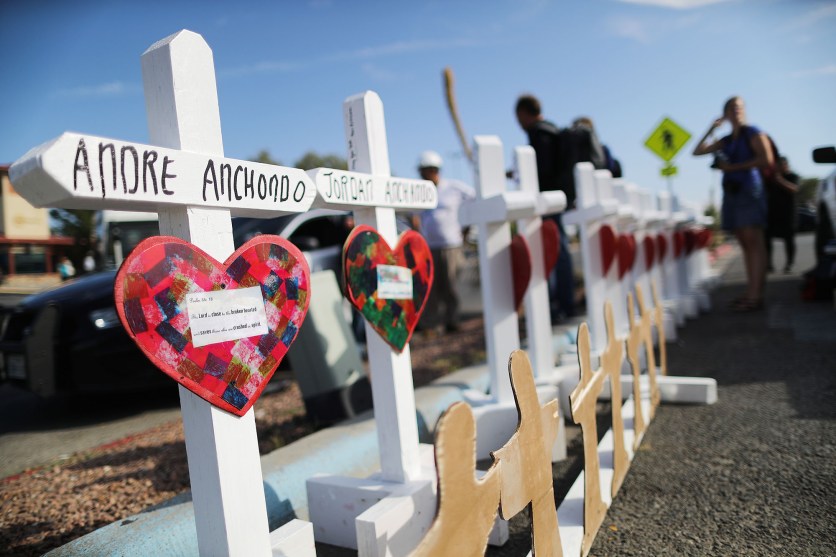 After his arrest, the El Paso shooter admitted to targeting Mexicans. Days later, federal agents rounded up and detained hundreds of Latino workers in Mississippi. For Monica Muñoz Martinez, the author of The Injustice Never Leaves You: Anti-Mexican Violence in Texas and an assistant professor of American studies and ethnic studies at Brown University, these two events are part of a long history of violence against Latinos that is often forgotten.

Last year, when Mother Jones talked to Muñoz Martinez about her book, which details the early militarization of the border, she told my colleague Tim Murphy: “There are striking parallels between what happened a hundred years ago and the kinds of violence that are taking place today. We are living in the midst of another humanitarian crisis that is being fueled by political rhetoric that criminalizes racial and ethnic groups. Politicians are perpetuating the narrative that causes the public to turn a blind eye to violence.”

We spoke to her again in the wake of the mass shooting in El Paso to discuss how that violence is rooted in the same hatred that plagued border communities a century ago.

Connect the dots between what happened in El Paso and the history that the attack exists in.

A hundred years ago, essentially anybody who looked Mexican, or was suspected of being Mexican, was violently and brutally policed. They experienced a reign of racial terror that was at the hands of law enforcement, like the state police officers, the Texas Rangers. That kind of state sanctioned violence also emboldened vigilantes to commit acts of racial violence against Mexican Americans and Mexican nationals. There were lynchings throughout throughout the 19th century, but also in the early 20th century.

“A hundred years ago, essentially anybody who looked Mexican, or was suspected of being Mexican, was violently and brutally policed.”

When new Anglos moved into South Texas with the arrival of the railroad and agricultural opportunities, there was an effort to transform that society, to displace Mexican landowners, to stop Mexicans from voting, to segregate the society and to subvert Mexicans and relegate them to an oppressed racial group, a controlled racial group, and one that was relegated to manual labor. It’s also a period of gross contradictions because there were people who were recruiting Mexicans to come into the United States to work at the same time that there were politicians describing the border as a violent place and describing Mexicans as a group of people who needed to be violently policed. So, 100,000 US troops were sent to the border to militarize the border. More Texas Rangers were added to the police force. As a result, hundreds of people died during this period, and they enjoyed a culture of impunity. These law enforcement officers and vigilantes were not prosecuted for the crimes that they committed. That created a culture of fear. People were targeted for being brown, being Mexican.

What took place in El Paso was an act of racial terror at the hands of a white terrorist. Judging from this manifesto that’s been attributed to him, he echoes patterns of violence that have been committed by many participating in the white power movement, not just in the United States, but transnationally. This is a case in which the Latinx community on the border was specifically targeted on the sole basis of race. It’s horrific to see this happening today, especially as a historian of racial violence, studying the history of racial terror that Latinx populations experienced in early 20th century. To see rhetoric that was used 100 years ago by politicians, by some Anglo residents, helps us to explain why an event like El Paso could take place.

The shooter warned of a “Hispanic invasion of Texas.” To what extent has Trump’s or other politicians’ language incited or influenced anti-Latino violence?

Describing an invasion, describing Mexicans as rapists, as murderers, racializing, criminalizing, and dehumanizing them. It casts them as perpetually foreign. He doesn’t describe Mexicans or Latinos as people who are here because they are American citizens. He doesn’t describe them as people who have been here for generations. Any person who’s here, he casts suspicion on why they’re here and how they got here. You have to look at the words that motivated this hateful, horrific act of racial violence in El Paso, but you also have to look at the words and the horrific acts of racial violence that are happening from the state.

That kind of criminalization of people regardless of whether or not they are citizens causes terror and also creates images for Americans that you see on the news. You see ICE, in some cases armed in military fatigues conducting raids. You see ICE going into places of work. You see people who are hiding in places of worship to try to seek sanctuary. When I think back to the historical period that I studied, there were photographs of US soldiers with their military weapons questioning Mexicans with captions like, “Keep eye on border Mexicans.”

“We have to hold the federal government accountable for enabling vigilante violence.”

Today, we see people with military-grade weapons conducting these raids. When we seen somebody like this terrorist in El Paso with military-style weapons, going into a primarily Latinx community and doing his own form of violent policing, the images for people—I can’t see how it’s unfamiliar. We’ve been seeing these kinds of images of police targeting brown bodies. When we see people in the administration deny the suffering of brown people—whether it’s the mothers of somebody who was murdered by a police officer, children who are leaving detention centers traumatized, or these raids in Mississippi and children who are abandoned, that is happening in the name of the US government. This is state-sanctioned racial terror.

When the state does this, the state is modeling “appropriate” behavior. We have to hold the federal government accountable for enabling vigilante violence. If you look at these children on the sidewalk crying, you look at the scenes of people in El Paso crying, or you read the quotes of people that were in these places of work in Mississippi asking for help because ICE was coming, that is fear. That’s fear that’s being inflicted on a racialized group.

What did vigilante policing look like in the early 1900s and what are some similarities to El Paso?

It’s really hard when we look at this historical period to separate what was vigilante violence and what was state violence. There were extralegal acts of violence by local law enforcement. The Texas Rangers breaking the law, denying people due process, and doing things like arresting Mexican Americans or Mexican nationals and then shooting them in police custody. So that’s a state act of racial violence, but it’s also an extralegal act. You can call that a vigilante act. Now, we don’t see mass executions of people by police, but we certainly see violence being afflicted when people are being detained in inhumane conditions, when they’re having to drink out of toilets, when they barely have enough food to eat, when they’re contained in cages where people are so tightly packed that they can’t sit down.

But some of the parallels to today also are that Texas governors, governors across the country, and US presidents didn’t condemn these acts of vigilante violence. They also didn’t condemn the acts of police violence, of state sanctioned violence. They endorsed it by doing things like militarizing the border. Publicly, people like Woodrow Wilson, US president at the time, condemned lynchings, but he didn’t enact policies. He was from the South. He knew full well that if you didn’t pass legislation that would give the federal government the ability to prosecute mob participants, lynchings would continue.

Another example is JT Canales, who was a state representative—the only Mexican American elected to state office. In 1919, he filed an investigation to the Texas Rangers because of events like the Porvenir massacre, in which 15 men and boys were murdered. They were in the custody of Texas Rangers and were slaughtered in the presence of their families. This happened in January 1918. Because that violence was so undeniably unjust, although nobody was ever prosecuted for it, it did mobilize an investigation into state abuse. JT Canales himself came under attack, came under investigation. His life was threatened by the Texas Rangers and other people in Texas.

Does this era feel like any sort of turning point in the history of racial violence?

What would be required to actually say that change is happening is if we see the public starts demanding—not just investigations into and the calls to prosecute white supremacist and terrorists—but that we also demand changes to immigration policies that have been inspired by nativists and racist understandings of who belongs in America. There’s been so much emphasis on the rhetoric of the president without criticism of his racist policies. I think about the thousands of people who have died to come to the United States, and Americans have just looked the other way. Thousands of people have died trying to come into the United States as a result of restrictive immigration policies, because of restrictive quotas, and now, efforts to even further restrict asylum claims.

“This was a time when more dead Mexicans were perceived as progress. That is a terrifying part of our history.”

In 1919, politicians like Claude B. Hudspeth were standing up and saying, “Mexicans are violent. You should shoot them on site,” and then he went on to rally to get the money to start the US Border Patrol. That’s the racism that’s at the roots of the institutions of border policing that we have today. What that did was it also inspired histories and Hollywood celebrations of Texas Rangers, who “brought civilization to the frontier.” People not knowing that history is a part of that racist legacy. Part of the work is to suppress these histories. We could even go a step further and say that it’s not just that it hasn’t been remembered but that actually, it was celebrated as progress. This was a time when more dead Mexicans were perceived as progress. That is a terrifying part of our history.

We have a long way to go to actually as a nation come to terms with the kinds of racial violence and fear and terror that have come in at the hands of the state. A hundred years ago, state violence and vigilante violence were deeply interconnected. Today, they are interconnected by the rhetoric and by the nativist sentiment. If we don’t understand how those are interconnected, then we can only expect more violence both from the state but also from white power terrorists.